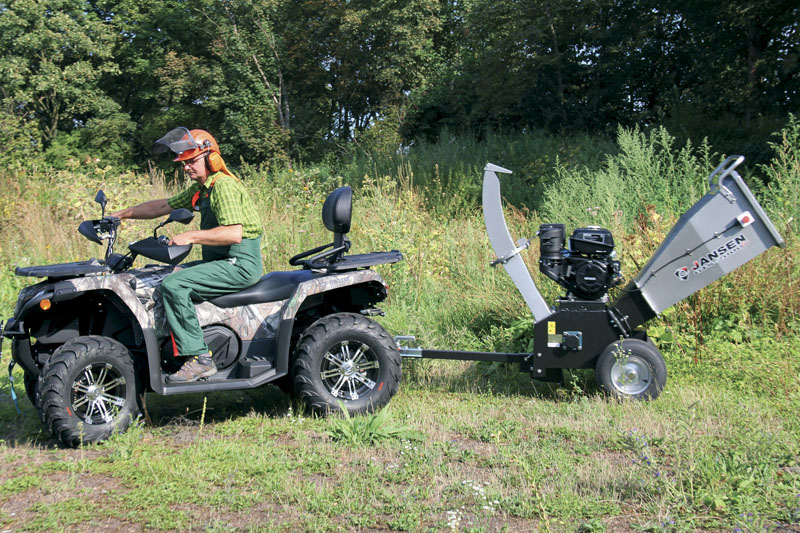 Not only is the range of quad and ATV models from well-known manufacturers growing steadily, but the market for attachments is also booming.

ATV fans in particular will find almost everything here that can be used in any practical way. We looked at the corresponding product range from Jansen and discovered some really useful ones.

Jansen GmbH & Co. KG, based in Emlichheim near the Dutch border, has been offering machines and equipment for agriculture, forestry and earthworks for over 35 years. The target group is more the semi-professional users or leisure activists. With a few exceptions, such as devices for tractors, the entire product portfolio still fits through a normal garden gate. Or via a trailer coupling to any commercially available ATV. Thus, one of the great advantages of the Jansen devices is already mentioned: they can be used in any kind of terrain and in the smallest of spaces. Another advantage, almost all devices or machines are set on wheels or crawler tracks. They drive themselves, like the mini excavators and dumpers offered, or can be pulled by a towing vehicle using a trailer hitch. We have ordered two typical machines as test devices that are ideal for ATV drivers and probably also cover the most common work with an ATV – wood processing. In this post we take a closer look at the mobile wood chipper model GTS-2000pro.

Good team: the forage harvester can be maneuvered easily with any ATV with a trailer coupling.

Full power: the Kohler engine has an output of 14 hp and is practically indestructible.

Dream dimensions: the Jansen shredder is only 66 centimeters wide and fits through every garden gate.

The GTS-2000pro wood chipper is just a new addition to the Jansen range. The model is based on a predecessor that has been sold successfully for many years and has now been improved through some optimizations. The main differences include the enlarged feed hopper (47 × 41 cm), which makes the shredder even more suitable for bushy material, and the optimization of the shearbar, which significantly improves the intake behavior of the shredded material. In addition, the angle of the feed hopper has been optimized so that loading is now even more efficient and easier. Due to the relatively massive construction, the device makes a robust impression, after all, the shredder weighs a good 203 kilos ready for use. Nevertheless, it can still be moved quite easily. The large rubber tires and the centrally arranged motor ensure easy handling. The biggest advantage, however, is actually the extremely narrow overall width of just 66 centimeters, because this allows the chopper to be moved even on the narrowest paths and through doors. The discharge chute can be rotated 180 degrees, and the discharge distance can also be regulated. You can also shred directly and specifically on a trailer. Depending on the nature and type of wood, the GTS-2000pro should be able to process branches with a maximum diameter of up to twelve centimeters. That is certainly a maximum value under the best conditions.

Rules of conduct I: The most important of all – never put body parts in the funnel – especially not your own!

Rules of conduct II: It’s better to poke with a stick than with your hand.

Also works: The leafy sticks from the previous year are processed without any problems.

We managed to push a four-meter-long, overgrown branch with a diameter of about eight centimeters through the funnel. Should actually be enough, because wood thicknesses above that can also be better used as firewood. Normal branches, brushwood, even with leaves was no problem at all. With the two knives rotating on a heavy drum, which run against a counter blade, the chopper pulls the wood in with a lot of force. According to the manufacturer, the alignment of the shearbar has been improved again compared to its predecessor. Incidentally, the drum knives can be turned when they are worn out and can therefore be used a second time. The chopper only becomes really mobile thanks to its own drive motor. The 14 HP KOHLER motor with electric starter creates complete independence from the power grid, so that the shredder can also be used without restriction in remote locations. The motor also has a pull-wire starter and, if necessary, can be switched off directly at the feed hopper using an emergency switch. The power the chopper actually develops can also be determined a little from the engine sound. We and the manufacturer strongly recommend hearing protection. With the seven liter fuel tank, about four hours of operation are possible. Even if the GTS-2000pro is made in China, there is nothing to complain about in terms of workmanship.

Good team: the forage harvester can be maneuvered easily with any ATV with a trailer coupling.

Jansen is in control of the development itself, which is also reflected in the corresponding certification of the devices. Operating instructions for device and motor are included and are written in perfect German. The chopper is available now and costs 2,490 euros plus shipping. Collection at the company location is of course also possible and is even recommended. Because in a 600 square meter exhibition hall, all devices and machines can be tried out and ready for operation. And maybe you will find other interesting “toys” for real guys.