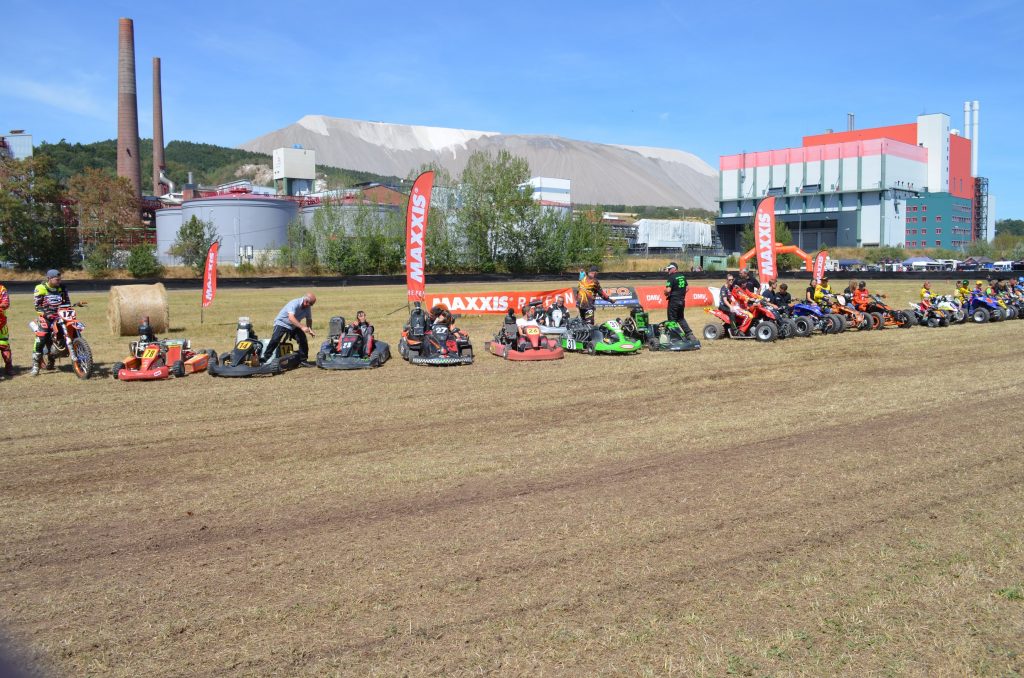 The fourth run of the MAXXIS REIFEN German DMV Shorttrack Quad Championship in Heringen on Sunday, 11./12. August, took place under difficult conditions. Because of the weeks of drought, despite regular watering of the runway, the development of dust could hardly be brought under control. Nevertheless, a few hundred motorsport fans saw exciting races in the quad and speed kart championships, in two track sports and one enduro class. 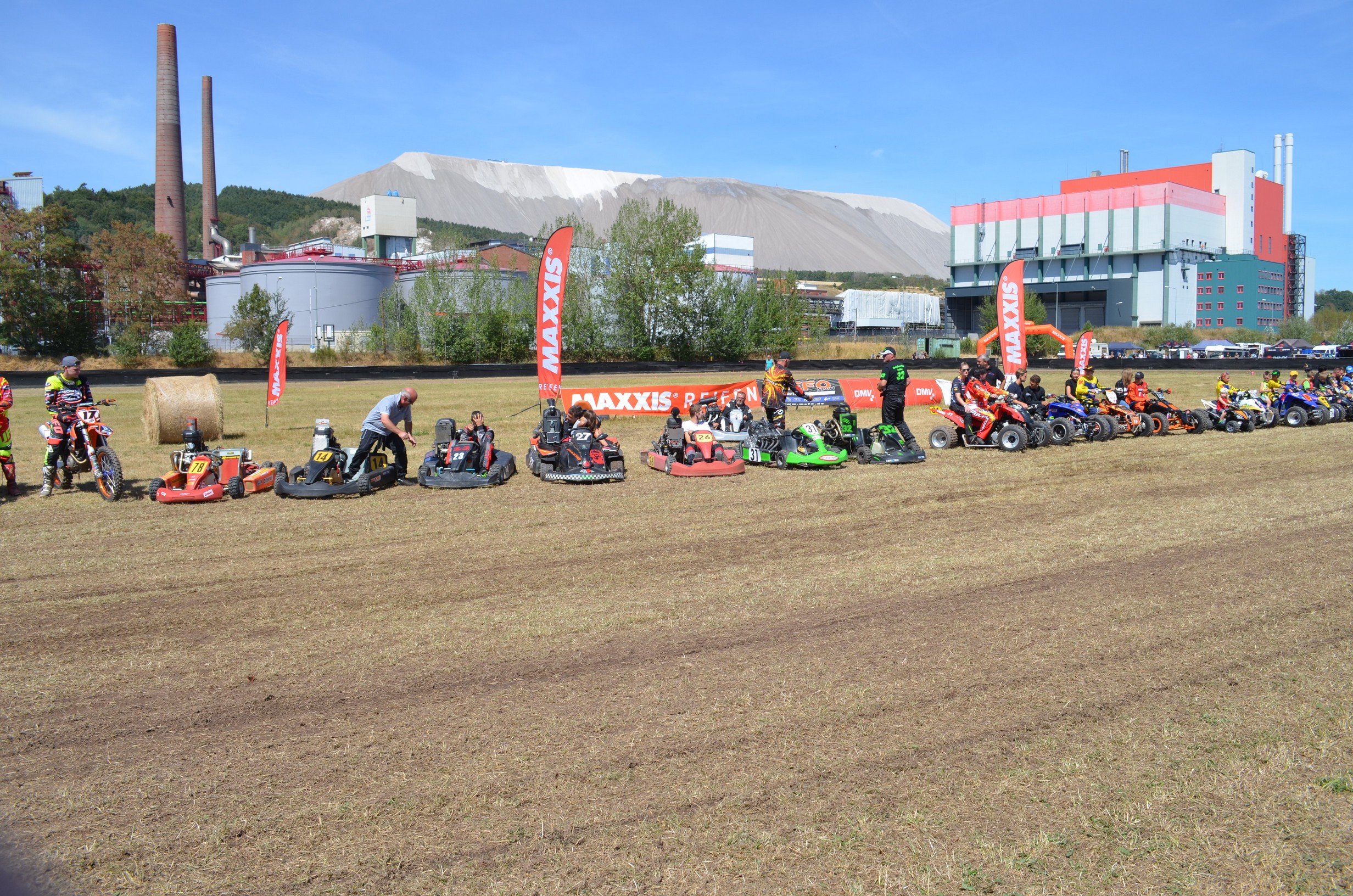 In association with local companies, the AMCC Heringen ensured that a large barrel of water was constantly brought onto the 500 meter long grass runway before and between the races. But the sun and warm temperatures on Sunday, combined with wind, allowed the moisture on the track to evaporate regularly before a field of drivers had come onto the track.

Nevertheless, eight races on Saturday and 34 on Sunday could be held without exception; on Sunday the last checkered flag fell at 5.10 p.m., despite constant interruptions due to the irrigation. With the exception of two accidents, everything went smoothly and in some classes the races were extremely exciting.

Ten track sports races and four with enduros were driven, but the largest space on both days of the race was occupied by the quad classes, which two weeks after Angenrod contested the fourth championship run of the Maxxis Reifen Deutsche DMV Shorttrack Quad Championship.

This time the fields unfortunately suffered a bit from a lack of pilots for various reasons such as vacation, defective vehicle, injury, etc.

Conny Kraft was completely on her own in the automatic class. Instead of letting her go home again, her races were merged with the youth class, she was able to drive her four heats and now has 10 more championship points in her account: https://shorttrack-online.de/?page_id=1944

There were only two drivers in the rookies class, but only because Marlon Dreier (youth class) competed as a guest driver against Simon Bonkowski. Actually there would have been three of them, but Nico Bauer already had to pack up after training on Saturday with a defective engine – the Homberger has not yet driven a single run this year.
Marlon Dreier was able to beat Bonkowski in the first run and, after Simon didn’t start after the second race due to circulatory problems, Marlon had the day’s victory in his pocket with another solo run.

The winner in class 3 to 500 cc was, as almost always Stephan Bischoff from Alsfeld-Angenrod with a sovereign performance and four race wins. Club colleague Matthias Hahnke (Lautertal) came in second on the podium, ahead of Christian Bonkowski (Felsberg), who had to end the race prematurely due to an engine failure. Didi Ziegler finished fourth on Saturday; on Sunday he refrained from further starts because his son Leon Joel had to be hospitalized after a fall.

In the premier class MEFO Sport, after Niklas Staufenberg was missing, there were only three competitors. Stephan Bischoff, who acted as a double starter, had to admit defeat to Chgristian Bonkowski in the third run, but won the other runs and took the day’s victory for the third time this season, which also brings him far ahead in the championship: https: // shorttrack-online .de /? page_id = 1950

Behind Bonkowski, the young eighty man had smelled Paddy Thorne’s fuse; the Briton drove to the finish four times and was then on the third podium!

In the school class, the accident occurred in the second run after the start was aborted, Leon Joel Ziegler braked abruptly and overturned with his quad. He had to be admitted to the Hersfeld hospital with a broken collarbone, but was allowed to leave the clinic on Tuesday. As usual, all four races were victims of Chantal Wagner. Justin Reichmann took second place in race 1 on Saturday, but after Leon Ziegler fell, the Scot did not want to compete again on Sunday. Felix Schulze came home second three times and was second for the day ahead of Reichmann and Ziegler.

In the youth class there was the usual two-man duel between Marvin Schulze and Marlon Dreier. Schulze won all four duels; Dreier was also out in the last run.

The races of the speed karts were particularly spectacular, as they had to fight extremely hard on the deep track with their low-lying chassis. The decision was only made in the A-final of the best four drivers: Ingo Duttinè (Grossostheim) from AMCC Heringen won the run and thus the daily ranking. Maurice Meyer (Osnabrück) improves from week to week, was able to win two heats and was runner-up in the final and runner-up of the day. Peter Heussner from Niederaula was in the top group until the final, but because he was only third in the final, he was only left with this place on the podium. Axel Pörschke had to be content with the unpopular fourth place. Markus Tork (5th) only slipped into the B final due to a failure in the last heat and was fifth ahead of Mario Schuchardt by winning the same. In the championship it’s getting more and more exciting – Peter Heussner is only 2 points ahead of Ingo Duttinè: https://shorttrack-online.de/?page_id=1956

In addition to the quads and karts, six team teams started for the first run of the newly created sidecar Hessen Cup. In the end, the Imanuel Schramm / Hermann Bacher team was on top of the podium; the Tettnang had only not won one of their four runs. An all-women team landed in second place: Nicole Standke and Kim Kempa from Stade in Holstein. The red-haired driver was particularly noticeable for her ambitious, aggressive driving style and after the race described the track as “good, but very demanding”. With Moritz Straub / Patrick Löffler (Tettnang) a newcomer team landed in third place.

Quad and kart drivers now have two free weekends before the “double hit” in Bad Hersfeld on September 1st and 2nd: rounds 5 and 6 of the MAXXIS REIFEN German DMV Shorttrack Quad Championship.

The grass track floodlit race for the German sidecar championship will take place in Hersfeld on Saturday (August 18). An event that is guaranteed to be worth a visit.

Driving impressions from herrings in 2017: