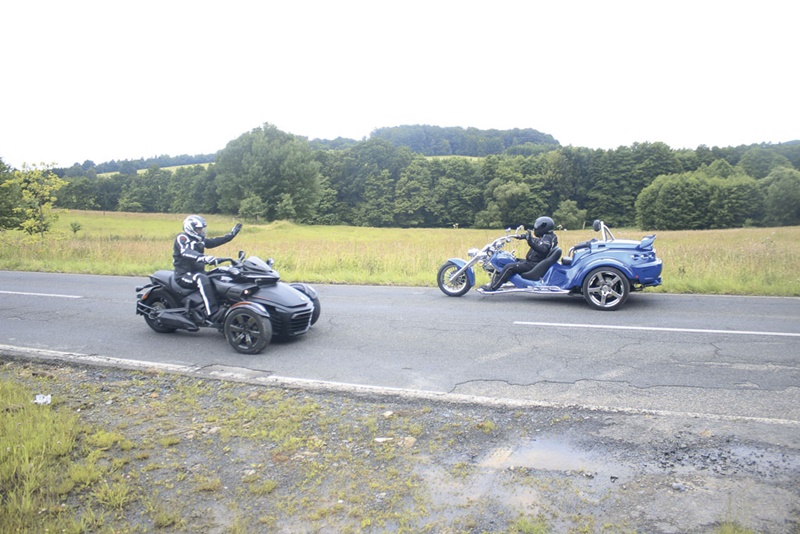 Trikes – the tricycles keep joining our scene, as more and more manufacturers are dealing with this type of vehicle and delivering models for every purpose. Cruising or sporty outing – what do you want? Our two test candidates can do both. Really casual.

Tricycles – aren’t they the epitome of mobility somehow? Normally the very first vehicle in our life that can be used to move independently and without parental control has three wheels. Then as now, you can see the youngest – no matter whether boy or girl – casually on three-wheelers around the apartment blocks and through the settlements. Inevitably, the term trike or tricycle alone reminds you of your earliest youth or of your children at a tender age. Both the Rewaco F1 GT and the Can-Am Spyder have what it takes to reproduce that childlike nonchalance and light-heartedness. Casual, if only because the two vehicles are not commonplace and naturally cool, so to speak. “You have to be an enemy of technology if you don’t like one or the other of these trikes,” says Wolfram Thiermann, master mechanic and trike fan in view of our test duo. He doesn’t care whether the individual wheel turns in a fork at the front or on a swing arm at the back. Each concept has its advantages, as do the different types of drive and units.

The 1.5 liter, 4-cylinder in-line engine from Mitsubishi forms the heart of the Rewaco F1 GT. Our test vehicle is equipped with an advanced 7-speed automatic transmission, which confidently brings the performance to the road. After all, that’s an impressive 140 hp with a turbocharger. Alternatively, the manufactory in Lindlar in Bergisch offers the automatic version with 110 HP without turbo or with a manual gearbox, 1.6 liter 4-cylinder in-line engine and 140 or 201 HP. The latter in turn with turbo. But what is the attraction of the machine? Quite simple: not having to switch – just enjoy. This drive is ideal for cruisers and touring enthusiasts looking for the perfect travel experience. So chuckle around and soak up the landscape? Not at all. With the optional power shifter on the handlebars, in “SP Sport mode”, the tame lamb can be turned into a racing wolf who invites you to take turns. For this purpose, the engine is embedded transversely to the vehicle axis as a central engine in a tubular space frame. This light and very torsion-resistant frame construction makes it possible to enjoy the fun of driving this powerful trike. The sporty chassis does the rest to ensure that the dynamics stay on track and the stable disc brake system is the guarantee for safety.

The Spyder F3-S appears sportier than the Rewaco. The motor from Rotax in Austria has to get by with one pot less than the car drive of the Rewaco. For example, a three-cylinder in-line engine works in the Canadian trike, water-cooled with electronic fuel injection and electronic throttle valve control. In terms of performance, it is almost on par with 115 hp. If the German make has to lift 615 kilograms, the Spyder is around 200 less. This should balance the “deficit”. What both tricycles have in common is the aforementioned sportiness. The Spyder clearly claims that for both of them. With this one can master winding roads with confidence – even with controlled drifts – and remain completely relaxed. The manual transmission works sequentially and almost at the push of a button. Alternatively, Can-Am also offers its spider with semi-automatic mode. We know the sporty FOX-Podium gas pressure shock absorbers from the quad area. They are equipped with a damper housing made of anodized aluminum, as well as pre-tension settings by thread. There is a cruise control on board the Canadian for cruising.

The Spyder is a “power cruiser”. Because he has an excellent command of both disciplines. City traffic and strolling trips can be easily rewound on the comfortable bench, which also makes the vehicle suitable for everyday use. The storage compartments do the same, especially the trunk in the front with a capacity of 44 liters. The Rewaco can do that too. In the rear, a generous luggage compartment awaits the driver’s utensils along with pillion passenger. Both of them sit a little more comfortably than on the sports car Spyder. Its footrests can be ergonomically adjusted for the driver, but in contrast to the Rewaco, you sit more like on a motorcycle. While you are enthroned on the Rewaco’s seating furniture over the asphalt. The fully automatic is also a tad more relaxed to drive than the competitor’s semi-automatic. The Rewaco is therefore also recommended for drivers with handicaps. Turn the selector switch to “D” and the Rewaco trike starts rolling. The four-cylinder engine develops its power in a controllable manner. The automatic transmission shifts super cleanly and smoothly. Pulled on the cable, the vehicle pulls up quickly, like when kicking down a car. Correspondingly more moderate progress is made with cautious acceleration, the transmission then does not turn the gears so far. But they do this all the more in sport mode, where there is actually a lot going on and driving fun is written on the face of the sporty driver.

The Spyder is about to move forward. It is crammed with electronic systems that support the driver directly and indirectly. The VSS (Vehicle Stability System) includes electronic stability and traction control as well as ABS. But they all work so inconspicuously that the fun doesn’t fall by the wayside. Visually, all of the electronics culminate in the “multifunctional information center”, by which the display instruments in the cockpit are meant. In any case, nothing is left to be desired here, the display options are already entertaining. The spider tugs on the drive belt and moves forward properly from idle. The transmission shifts positively. Braking with just one foot brake lever takes getting used to. Of course, three disc brakes are also installed on the Spyder, but the sporty driver lacks the feeling of being able to intervene with his hand. This does not affect safety, our Spyder stops reliably and safely via the integral system. The braking system of the Rewaco, which also grips with three discs, is also beyond doubt.

Initial concerns about cornering were unfounded in both cases. The Spyder, for example, can even take corners with complete safety. You quickly get used to this vehicle concept and immediately have fun with this vehicle. The Spyder has power and pulls unbelievably. The suit is phenomenal and yet the vehicle can be safely controlled at all times. On the autobahn, the Spyder unfortunately follows every groove due to the narrow lane, but that’s not where it belongs, but on the winding country road. Although he needs a little more tutoring in the corners than the casual Rewaco. He likes to take a little support, for example in distribution circles that are run in faster – the trike pushes a little over the front wheel in this or a similar situation, but this remains manageable. In comparison, the Rewaco is a cruiser in the best sense of the word. Very comfortable seating position, lies full on the road and has enough power. Also enough to let it rip every now and then. It is remarkable that you still feel absolutely safe even at very high speeds, thanks to the road holding. Both trikes are of high quality, operation is child’s play, brakes are great.

The three. For a mathematician, this number is the third one that is unique, in trigonometry the triangle is the simplest geometric shape in the plane. For us, the three is a real revelation, an expansion of our horizon of experience. Spyder F3-S and Rewaco F-1 GT have a large part in this. Both are driving machines of a special kind, each with its own advantages and surprisingly few disadvantages. Our driving report can only begin to describe the fun we had during our test drives. Like back then, when you casually curled around the block with the “Puky tricycle”.

Can it also be used?

Something’s going on in the east

Tour in the border area