ATV Quad Magazine
Home News The keeper of the lost 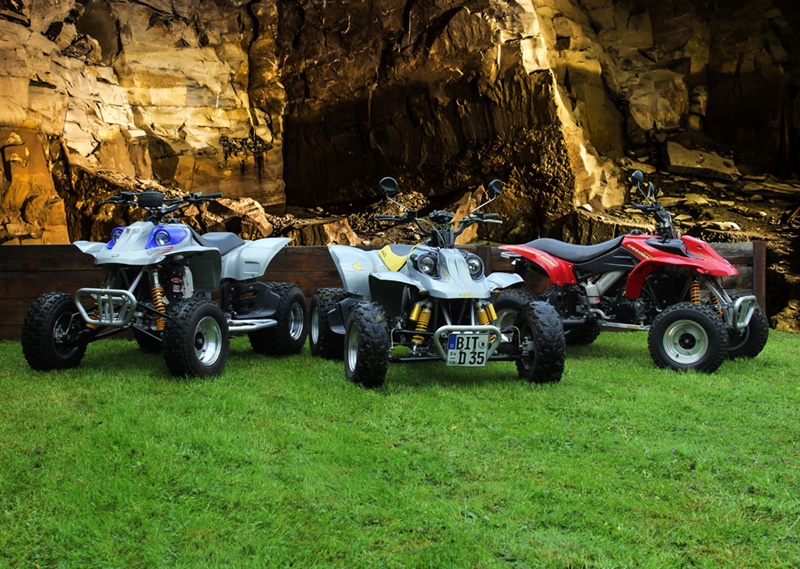 The name Cannondale will likely only mean something to the old-timers in the quad scene. The US manufacturer of trendy bicycles initially developed an MX motorcycle in collaboration with Husaberg at the beginning of the 2000s and shortly afterwards also a sport quad that took off like a rocket in the scene.

In a very short time five different models were available, which were also sold worldwide. The vehicles have conquered the most important racing series, but it quickly turned out that the Cannondale engines were not stable. After only two years, the Cannondale motorsport division went bankrupt and the technically advanced vehicles were quickly forgotten. Only die-hard fans would bother with a Cannondale Quad today. We met someone who had four of them in his garage. A visit to the treasury of the keeper of the Grail of the sport quad scene was therefore an honor. In 2001, Cannondale initially launched quads and motocross bikes on the US market, and a little later the futuristic vehicles were available for purchase worldwide. Both equipped with a completely handmade aluminum frame, which also served as an oil reservoir. The world had never seen anything like it before.

Both the Crosser and the Quad had the same engine block, which was way ahead of its time. A 432 cubic centimeter water-cooled DOHC 4-stroke engine with 4 valves. Electronic injection was also a premiere for the cross bike and the quad. Not enough of the groundbreaking developments, the cylinder was planted the wrong way round, i.e. with the inlet at the front and the outlet at the back, in the aluminum frame. Yamaha took up the principle again ten years later for the 450 series MX bikes and marketed it as a spectacular new design. So much for the term “innovation”, which Cannondale really breathed life into with further details. Even the basic model with the significant name “Cannibal” was designed for use in sports. With an early type of OBD, a computer could be used to change the engine characteristics. Every driver was able to adapt his machine to a wide range of applications. More power from the lower speed range, or more top speed? At Cannondale, the ambitious amateur pilot was spoiled for choice. In very early models, you could also use an accessory with which you could choose from three different characteristics at the push of a button on the handlebar.

It is unbelievable how far ahead of their time these vehicles were. Within a very short time, the people willing to buy were available to five different models, each of which could only be distinguished by correspondingly different, or better said, higher-quality attachments. The “Cannibal” as the basic version and without many extras was quickly followed by the “Speed” variant, which was specially tailored to the European market and the possibility of use in road traffic. The “Blaze” and “Moto” models were factory-equipped with a wide axle, wide A-arms, Nerf bars, an Öhlins chassis and beadlock rims, which predestined them for immediate racing. Furthermore, the two racers were equipped with an Öhlins steering damper, a fatbar handlebar, steel braided brake lines, a kill switch and start number plates. The icing on the cake was an FMF exhaust made of fine titanium, which is also known by insiders as a “toaster” due to its angular design. In the United States there was also a model called “Glamis”, which was particularly recommended for use in the desert region of the same name in California thanks to its special tires. A number of dealers quickly found themselves in Germany who trusted the Cannondale a lot. First and foremost, these were dealers from the sports field, some of whom had their own racing teams. Even then, there couldn’t have been a better reference than sporting success. And so a certain sales success was inevitable despite the almost “cheeky” prices of around 12,000 euros for the basic Cannibal model and over 16,000 euros for a Moto.

Barely two years after its market launch, news quickly spread around the world. Cannondale is broke! At least that was the case with the Group’s motorsport division. How did it come to this in such a short time? Well, someone will give us information about this who should know. Dirk Sonntag from Bitburg in the Eifel is a real connoisseur of the Cannondale quads, a private screwdriver and collector. He currently owns four of the extravagant four-wheelers. A total of six Cannondales were already in his possession, two of which he parted with after a successful restoration. The family may also have complained about the space available in the garage at home, because there are also a few ready-to-use racing karts and a bunch of bicycles that also need to be adequately stored. Dirk receives us for an audience and lets us look into his sacred hall. Fortunately for us, a “Cannibal” is just completely stripped and jacked up, stripped of all attachments. This enables rare insights and views, which in particular reveal the unique frame construction.

The keeper of the lost lets his expertise flash for us. “Back then, Cannondale was known for these extremely strong frames. The steering and chassis properties and the enormous power of the engines quickly made the special quads popular with racers. But there was a huge catch: the reliability of the engines was cruel. Some of them didn’t even run for five hours, so salsa dancing was already the order of the day in the block. The crankshaft bearings were simply too weak at the factory, which is why you had to retrofit complete crankshafts from the accessories if you really wanted to drive your Cannondale longer. There were and still are problems with the oil cycle. The oil is simply pushed out through the air filter. I haven’t found any real remedy for this either. In addition, the excessive use of light metals in the area of ​​the engine was fatal for many engines. The aluminum water pump corrodes against the magnesium valve cover. The Suzuki LTZ 400 and its offshoots also had the problem. Nevertheless, I love the Cannondale quads for what they are, highly technical sports equipment that can be optimally adjusted to any driving situation ”.

The legend is alive

Dirk works in the construction industry in real life, but he still has gasoline in his blood, which of course he also passed on to his sons. The three racing karts in the garage bear witness to the many weekends together on the track. Knowledge of screwdrivers is therefore required. That’s why it was certainly not impossible when Dirk bought the first Cannondale online in 2013 for a cheap price. “Of course, nobody can ask for the prices that were called back then. When the bankruptcy became known in 2003, many dealers were only able to part with their stocks with pain. Sometimes real bargains were made, but many of them miscalculated because they were simply not able to handle the complicated technology.

That is why you will hardly come across a ready-to-use vehicle in the used market today. In this way I was always able to get hold of one of the divas cheaply. And you can still get spare parts in the USA today. You have to search, but I have very good contacts now. After the bankruptcy, ATK took over the sales and spare parts supply of remaining stocks. Unfortunately, nothing came of the takeover by Dinli that was planned at the time. Who knows, maybe the Taiwanese would have gotten a grip on the serious quality defects ”.

OK, one of the currently four Cannondales is only there as a skeleton, another Cannibal, which has mutated into a “Blaze” with many accessories, is currently struggling with a defective oil pump. With the other two, Dirk invites us to do a few laps at the former Bitburg airfield. So we load the two darlings into the family van and look forward to a real experience. However, we also quickly find out what handicap Cannondale owners have to live with. Dirk explains the event procedure to us: “There are a few things to consider. Switch on the ignition, then operate the starter for a second, this wakes up the on-board computer, which then re-sorts itself. Then activate the starter without gas for a maximum of 2 seconds. Either the diva starts, or it’s vinegar first. Then you can wait a few minutes and try again ”. In our case, the red cannibal has decided to bitch. For the photo session of the Cannondales in action, only the “Speed” declares itself ready, which is completely sufficient for a very intense driving impression.

After the driving photos are in the box, Dirk lets us trust his treasure. A real hammer, the acceleration, the velvety manual transmission, the easy handling, and a chassis that instills confidence immediately. With every lap on the disused airfield, every change of direction and switching process is easier. The braking system is still on par with any premium quad today. “The fact that the Cannondales are real racing quads can be seen from the weight of just 168 kilograms. The maximum engine speed of 11,300 revolutions per minute with an appropriately adjusted engine setup also shows what performance a Cannondale is capable of. Up to 70 hp can be squeezed out of the 432 cubic centimeter displacement ”, explains Dirk. After an exciting day with the (more or less) living legends, we wonder what would have been if Cannondale hadn’t made the grave mistakes? Instead, like other manufacturers, would have continued to develop and then perhaps also offered two or more cylinder engines? Dirk has often thought about it. Anyway, he’d be delighted, just like us.

The beginning of a new era: Polaris announces the newly developed RANGER with electric drive – Quadjournal

Osborne makes it two in a row to extend Pro Motocross lead – MotoOnline.com.au