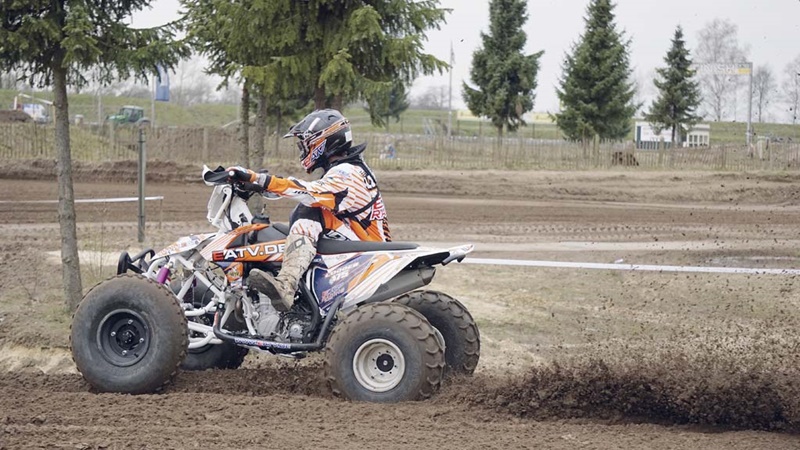 Some stories are told quickly. This one is only really beginning now. It all started with the conversion of standard quads and has continued for over a decade with the development and production of exquisite sports quads: E-ATV. And now it continues with the latest technology and a vehicle that redefines quad sports.

Real sports drivers don’t have it easy at the moment. Several manufacturers of popular quads have withdrawn from the MX and Enduro market. Honda’s TRX 450 is not officially available in Germany, Suzuki has discontinued the LT-R and at Kawa nothing works with the KFX 450 either, KTM unfortunately also gave up its commitment in the four-wheeler sector. Only Yamaha continues to inspire the scene with the YFZ450, the “R” with an injection engine and a wide chassis. So much for the big manufacturers. It has always been the enthusiastic screwdrivers who put excellent quads on the wheels with great ideas and great solutions. Clemens Eicker and his fine quad manufacturer E.-ATV Racing is one of them. For many years, the Lower Rhine man has not only been delighting connoisseurs with his creations.

The best thing about the quads from E. ATV Racing is that each one optimally covers its intended purpose. If you order a street quad, you will also get one. Uncompromising, but also that driving on asphalt is fun and safe. Enduro? The same applies here. Everything is configured in such a way that it goes optimally over sticks, stones and roots. The new motocross model is therefore also an uncompromising piece of sports equipment. For the new E. ATV 450 SX-F, the advertising text that KTM wrote for its motorcycle, which the Quad made in Germany once again serves as the basis: When maximum performance is required, there is no other choice than the 450 SX-F. This model has proven itself worldwide and over the years in the most important and largest championships. That is true and applies equally to Eicker’s vehicles. “When designing the new machine, we paid great attention to saving weight,” explains Sebastian Lodder, chief mechanic and at the same time “works driver” at E. ATV. It was tinkering for a long time and finally the competitive athlete only weighs 158 kilograms. “We even looked at the plastic parts to see where we could get a few grams!”

The engine from KTM – the hammer

For the idea of ​​bringing an MX-Quad onto the market, which brings the indication “ready to race” into a new dimension, nothing less than a performance explosion is needed. And plenty of thrust: the 450ccm 1-cylinder engine develops more than 62 hp. With a maximum speed of 11,500 revolutions, it goes to the extreme and is never overwhelmed. With new features such as its much more compact dimensions, higher performance in the entire speed range and a weight reduction of 1.8 kg, this newly developed engine is the lightest 450 engine on the MX market. This is also thanks to a revised cylinder head with a simple overhead camshaft and the latest electronic fuel injection. In the revised and six millimeter shorter cylinder with optimized water cooling, an extremely light piston works in a box-in-box design with a weight-optimized piston pin, which makes a major contribution to the low vibrations of the engine and its speed. The lithium-ion starter battery used weighs only 495 grams and, in addition to safe and reliable starting, offers a weight saving of one kilo. The power pack is kept in good spirits by a light 4-speed gearbox with gear ratios that are perfectly matched to the power delivery of the engine. In addition, gears 1 and 3 are now provided with a special surface coating for greater reliability. The completely redesigned Keihin engine management system with electronic fuel injection has a completely new type of throttle body. E. ATV pilots have enjoyed more thermal safety than solo drivers since 2009. There is a fan as standard, which intervenes adjustable between 65 and 110 degrees oil temperature.

A solid base: the chassis

In addition to the engine, Eicker has also adopted other features from the basic motorcycle. For example the optimized air filter box or the traction control, which makes it easier for the driver to get started. The quad also makes it easy for its ambitious pilot in other respects. So he can rely on the suspension package. As standard, the large A-Arms systems from TFX-Suspension from Holland are used, which, like the original WP damper from KTM, are adjustable in rebound and compression. Equipment with three Reiger dampers, which offer even more stroke and have the ingenious tilting technology of the suspension specialist, is subject to a surcharge. The damper uses a sophisticated system to regulate the flow of oil and “detects” whether its wheel is inside or outside of the curve and adjusts the damping accordingly.

The rear damper is suspended from the CNC-milled swing arm made of high-strength aluminum. The axle is made of rustproof stainless steel that is actually only made for Airbus. These do not break and show no signs of fatigue even after five years of use. In addition to the suspension, everything at Eicker’s can be adjusted or customized. For example, if you want your footrests to be placed further forward, you just have to specify it when ordering. The ground clearance has increased compared to the previous models, the rims roll with the Yamaha bolt circle. “Our customers around the world can fall back on the network of KTM dealers for the most common parts,” explains Sebastian Lodder, but also refers to the ABM brake discs that are manufactured for his employer. There is also the underbody protection, also for the swing arm. The bearings of the lower A-arms are now needle bearings and not rubber silent bushings as before. The steering column can be adapted to the driver and, by the way, runs through the steering head of the motorcycle frame, which gives the E.ATVs incredible stability compared to the constructions of conventional quads.

You take a seat on an ergonomically perfectly shaped bench with a higher foam padding volume, which ensures great comfort. Although the new one – like most E. ATVs – gives you the feeling that you are sitting on a motorcycle, it does so after just a few laps. One quickly appreciates the enormous freedom of movement that enables the driver to change direction as quickly as possible. This is due to the fact that Eicker also takes care of the size and position of the notches, which are adapted to the driver. “Despite the look of a moped, our focus is always deep down,” explains Lodder on the property. Our test quad thrilled in the wave troughs of a Dutch sand-cross piste, which is usually extremely hard on your stamina. As if on rails and almost stoically calm, the Eickersche projectile ironed the humps down. Class!

The “Corner Control” adopted by KTM lets the car shoot out of the corners. Compared to other manufacturers, but also compared to previous model years from the company, the powerful motor has become more meterable and therefore more controllable. What initially seems like a performance deficit is actually the improved engine management. A more stable cornering is also recorded. The MX-Quad from E.-ATV adapts perfectly to its driver. Man and machine merge into one. OK then. Because on the cross route there are usually only tenths of a second left to make the right decision. Accelerate or brake. Left or right past.

(Not) a question of price

Because it is – mind you – an absolutely competitive vehicle for the MX driver. If he wanted to tune the quad of a Japanese manufacturer to a similar level, he would get rid of several times the money. Investments in the chassis and the engine tear holes in the budget, but are superfluous at Eicker. Once bought, you have to be competitive for a long time. And we will all be able to enjoy such quads for a long time to come. There is something going on!

The keeper of the lost

With ELKA at level 3