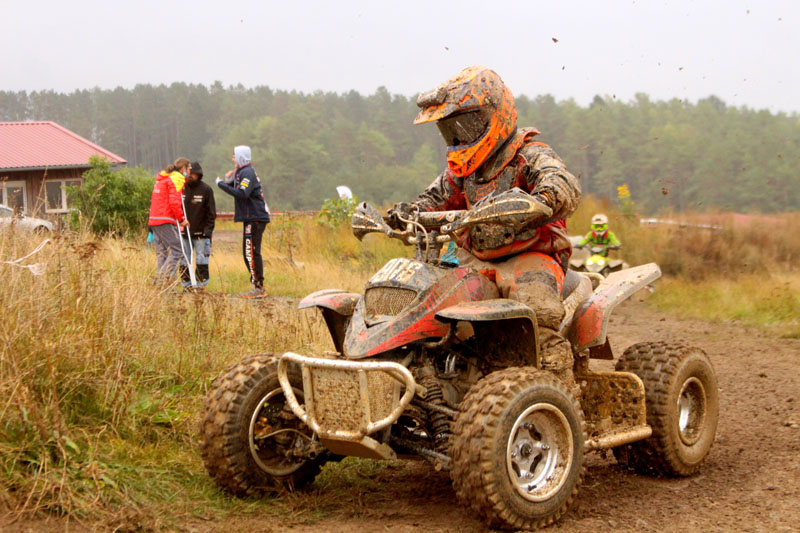 If you trusted your weather app last weekend, you missed one of the best endurance masters races of this memorable season. In Central Germany, Tief Youngme let off steam, but around Marisfeld in the Thuringian Forest on September 26, real life simply did not fit the large blue screen display on smartphones. While the world seemed to be going under around Thomas Bieberbach’s Adventureland, it remains as drizzly as possible and perfectly drivable on race day. > Werksboden

The em are open to ATVs, quads and UTVs.

endurance-masters had already changed the course for a new racing calendar last year. “We start with the championship in the old calendar year and try to avoid the environmentally critical times in spring and summer.” Series organizer Hans-Georg von der Marwitz can offer 6 races that are part of the 2020 championship, even in the year of Corona madness. Forest fires, setting and breeding times, the constant Damocles swords of traditional time planning remain under lock and key, so that the virus would then turn our lives inside out, nobody could have guessed in spring. 4 countable runs are now history and staged according to Corona rules. Two more times this season, the starting flag will send the Endurance Masters packs onto the tracks. Olszyna in Poland and Boxberg in Lausitz are all the rage. If Corona allows.

2020 is the year in which nothing works without the approval of the health authorities. As an event organizer, you get the uneasy feeling that the responsible approval authorities would prefer not to release anything. There is little room for discussion. But we are annoying and meet the requirements. And in the end they are allowed to drive under strict conditions. Hopefully in the near future too.

Dust and heat in Gröningen with rally legend Armin Schwarz, drizzle and grippy ground in Marisfeld with enduro world champion Thomas Bieberbach. Local matador Marco Sturm on the Renegade had canceled the sails in Gröningen in the dust. Marisfeld should be his race now. The Thuringian veteran hits the parcour with the big ATV times that make even quad riders look old. Only a flat tire can stop Marco. As with fresh tires, the Can-Am driver can still secure third place. Szymon Seweryn from Poland inherited the victory for the first time, ahead of master plumber Markus Wimmer from Upper Bavaria.

In the 2-hour quads race in Marisfeld, the maximum number of points goes to Sven Becker from Saxony. The Czech Katerina Krenkova fiercely resists, but ultimately has to make do with second place. 2-meter-man Mike Kirste improved his championship account with third place. The one-hour sprint run showed an exciting fight between championship leader Max Kubat and his buddy Marius Kernchen, who was able to catch Max on the last lap on a greasy track with 3 corners to go.

Father and son Braasch want to win the title in 2020 in the over 40s and in the rookie class. The Lower Saxons get along best on the sticky terrain and take first place each. They are now both leading in their classes. “I want to be at the top of the winner’s podium with Luc,” the master bricklayer explains firmly.

The team class was reshuffled in 2020. Young blood plus experience of old age, the recipe seems to be working. In addition to the Marisfeld winners Alex Hauswald and Lennox Quellmalz, the Neuseenländer Quadverein sends Frank Kaatz together with young boy Charly Kieshauer into the race. Father and son Enrico and Willy Koch, who now lead the championship thanks to their 2nd place in Marisfeld, are fighting for places with veteran Torsten Harz and Falko Harz. Bad luck for Daniel Marr and partner Justin Reizle: Justin caught a stone in the 2nd round that forced him to give up. As a result, the home team does not meet the requirements of the regulations, which state that each driver must have driven at least 20% of the team distance in order to be classified.

Not much new at Youngster: The two Stiller Brothers dominate their classes. Only Luca, who is on the road with a throttled 450, experiences resistance: the racing amazon Lilly Becker can defeat Luca in Gröningen, but in Marisfeld she is well served with second place. Lucas’ little brother Matteo shows the strength of the 250cc with a self-sacrificing driving style and wins the class of the Youngster2 confidently. The fact that cousin Peter Peters has set himself the goal of winning the title among the youngsters shows the strength of the clan.

What’s next. Endurance-masters is prepared to continue the rest of the season even under difficult conditions. “As promised, we will do everything in our power to be able to elect the German DMV-Cross-Country.Meister 2020 in one month.”

Finally: Flensburg gets its own Louis branch