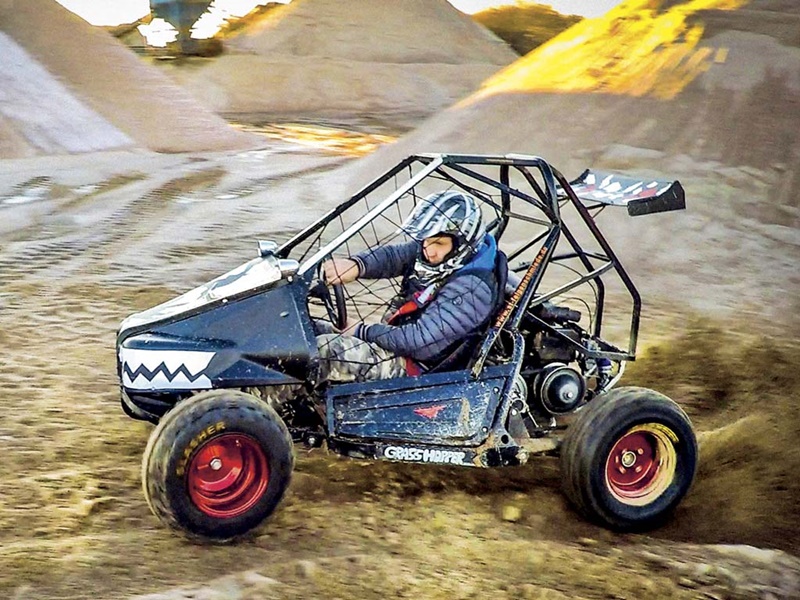 Record! So often there has not been a reader with a private custom project in the quad world represented. Christian Schneider already shows us with his power buggy “Little crazy Alligator” its fourth renovation. As usual, not an everyday vehicle.

Another day – a new project! Anyone who gets up in the morning with this thought must have bumblebees in their bum. Christian Schneider from Flensburg is one of them. Professionally active in the music industry, screwing in the workshop is a welcome compensation to clear your head. In the past few years he has already convinced us of his creativity with two elegant quad conversions and recently with a unique three-wheel concept (Mad-Max Dragster, see “Quadwelt” issue 02/2016).

Quickly checking the world situation on your Mac over morning coffee and checking the bargain status on eBay – this is a familiar ritual. While doing so, Christian stumbled upon the buggy of unknown design shown here, which was looking for a new owner in Magdeburg. The meager information in the ad also contained engine data. There was talk of a Honda GX 20, 4-stroke with 20 hp, but the Japanese never built such buggies. So an appointment was made with the father of the owner over the phone, unfortunately the junior was on the assembly line. When he rolled the yellow thing out of the barn, Christian’s enthusiasm was a little subdued. It took almost half an hour before the cart actually started. And the test drive was not characterized by explosive driving pleasure. But Christian still saw potential in this vehicle, put the negotiated purchase price on the counter and rolled back to the North Sea with the yellow bumblebee on the trailer.

With the help of the vehicle documents, Christian started researching the actual manufacturer. “Construzione Macchine Marconi – that sounded like a delicious pasta to me at first. When I landed on the website of this company, I really had to laugh, because they only have heavy construction machines, excavators and wheel loaders on offer. But also the little buggies with the name “Grasshopper”, which they apparently produce themselves in Italy. However, there are also a number of other buggies clearly made in China. Everything seemed a little opaque and not very professional to me “. What Christian quickly found out was that his new toy apparently had the smallest motor of all variants. That absolutely had to be changed. So pick up the phone and threaten the guys in Italy with cash. However, they didn’t understand German there and Christian didn’t get much further with English. Even by e-mail, the people in Bologna didn’t get excited about a deal.

So, disappointed by so much ignorance, Christian had to help himself. During a meticulous study of the information material on the website, he came across information about a Rotax 503 engine. Should it really be the potent two-cylinder 2-stroke engine that is also used in snowmobiles? In fact, the pictures shown left no doubt that the variator and transfer case would work well with this engine too. “Thank you guys, you helped me with that!” So, I went straight back to eBay and lo and behold, a Gruber company in Austria had exactly the desired Rotax engine with a good 60 hp as an overhauled used one on the shelf. 3-2-1… the powerhouse changed hands for an acceptable amount in euros. The delivery time of just under a week was used to expand the Honda engine. Without further ado, it was sold via the “Bay” to an interested party who wanted to use it to pimp his lawnmower. This is how a smooth recycling cycle works.

The Rotax engine was there on time, as promised, the weather was like springtime, so the installation started immediately. Adjust something here and there, flex it away and weld it down and after four hours the heart transplant was done. The belt of the centrifugal clutch still had to be aligned and the exhaust system including the manifold had to be adjusted, but those were just fine details. It was time for a test drive. Mixture in the tank and the line tear, as is usual with a robust two-stroke. The yellow grasshopper came to life with a good bang and Rengdengedeng. “Pure goose bumps! I sat down immediately and the mail went off. The purest catapult, so poisonous that you have to be really careful with the gas pedal. I thought I was sitting on a powder keg ”. So Christian was initially satisfied with the performance. He was not satisfied with the DHL look. All plastic parts were painted black matt and covered with a special camouflage film. The alligator theme was also implemented. It was not the first time that the guys from www.at-felgenschmiede.de helped Christian with the rim preparation. For the alligator they powdered the old original rims in red-chrome, which gives the buggy its very own touch. Christian completely renewed the original Italian cable mess, as well as adding an ignition lock and lighting. Another successful pimp, as we think.

With bolides to the starting gate

Troublesome back forces Webb out of Pro Motocross season – MotoOnline.com.au

Kinderquad24.de – quads for the youngsters