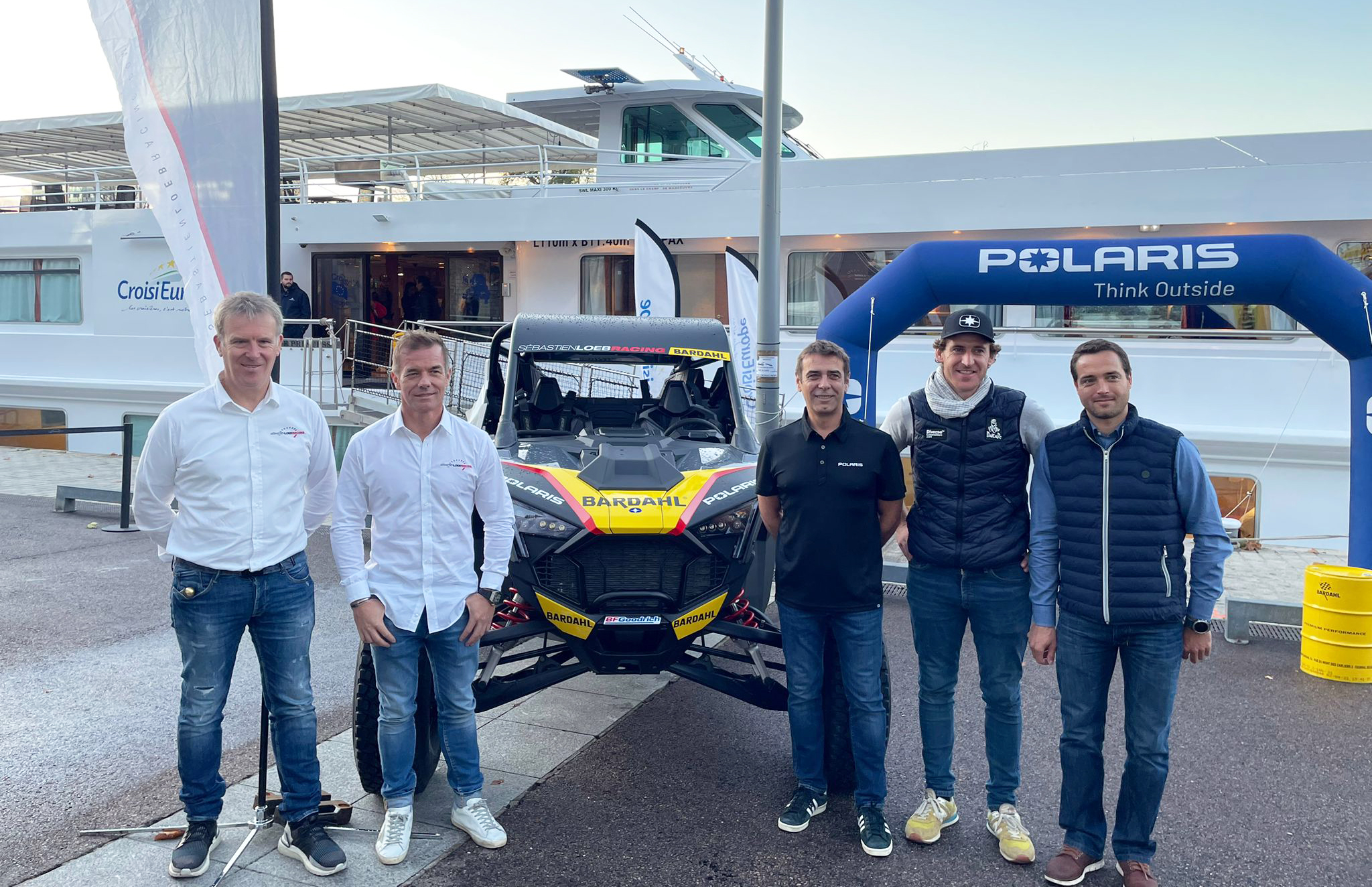 Big names are pursuing big ambitions: Motorsport legend Sébastien Loeb and Polaris Offroad, the world’s leading supplier of power sports vehicles, are now working together. Together they want to take on a leading role in the SSV T4 category in international cross-country rally sport. The partnership is initially designed for five years. The first joint appearance will take place in around two months at the world-famous “Dakar”. The traditional event is taking place in Saudi Arabia for the fourth time and will serve as the season opener of the FIM Rally Raid World Championship from December 31, 2022 to January 15, 2023.
Perfect combination of experience and success: two heavyweights of international racing join forces with Polaris Offroad and nine-time World Rally Champion Sébastien Loeb. They direct their attention to cross-country rallying, probably the discipline in motorsport that is most strongly characterized by passion and a thirst for adventure.

Marathon raids have long been a favorite part of racing and rally driver Loeb. Dominique Heintz, co-founder of his team Sébastien Loeb Racing (SLR), has also been addicted to the sport since making his debut on a motorcycle in 1986. The plan to achieve ambitious goals in cross-country rallying has connected the two Alsatians for a long time. Now they want to realize their vision together with Polaris by 2027.
Since it was founded more than ten years ago, SLR has relied on a balanced mix of experienced drivers and promising talent. Loeb and Heintz – both are also active on two wheels – see cross-country rallying as a perfect complement between car and motorbike drivers. This also explains their goal: They want to give bikers who want to tackle their desert adventures with a solid roof over their heads a smooth entry into a competitive environment. From the point of view of those responsible for SLR, the SSV T4 category for near-series side-by-side vehicles (SxS) is particularly suitable for this. So it makes sense that they chose a proven expert as a cooperation partner for entry into this class: Polaris. In the history of the “Dakar” alone, the American manufacturer has been able to immortalize itself with six SSV victories.

The brand-new Polaris RZR Pro R is at the center of the partnership between SLR and Polaris Offroad. Even in the production version, the sports machine achieves incredible things and thus provides a good basis for competing in the top category of marathon raiding at events such as the famous “Dakar” to fight for the world championship title, which was recently awarded for the first time.

Sébastien Loeb – Founder of the Sébastien Loeb Racing Team:
“With the ‘Dakar 2023’, a new adventure begins for SLR as a team. For me personally, this legendary event is now my main field of activity, where I have learned a lot and gained experience over the past few years. It is one of the most exciting challenges for racing drivers. At this particularly difficult long-distance event, the most important thing is the cooperation between the team, drivers and partners. I think it’s great that we can perform on this unique stage with SLR. Dominique started his ‘Dakar’ career as a motorcyclist. He desperately wanted to return to those origins. The opportunity to work with a renowned manufacturer like Polaris gives us an extra boost of motivation at SLR. We look forward to the opportunity to realize the tremendous potential of Polaris off-road vehicles. Together we have set ourselves ambitious goals. We want to celebrate successes in the SSV T4 category as soon as possible.”

Polaris RZR: powerful and reliable side-by-side pioneer
Polaris established the performance side-by-sides segment in 2008 with the RZR. Since then, the power off-roader has been writing a unique success story and is the first choice for performance-hungry customers and customers interested in motor sports. This year, Polaris presented the RZR Pro R, the most advanced and powerful variant in the 14-year development history of the popular model series.
In addition to numerous innovations, the latest RZR evolution stage is characterized by the most powerful series engine that has ever been installed in an SxS worldwide. The free-breathing ProStar Fury four-cylinder with a displacement of 2.0 liters delivers 165 kW (225 hp). The larger clutch and the specifically reinforced drive belt ensure a more direct response and optimal acceleration under all conditions. The ProStar Fury unit impresses with superior power delivery and, with its wide usable speed range, enables a thrilling power output in every driving situation.
The first “Dakar” appearance for the Polaris RZR Pro R is primarily aimed at gaining experience. Only in the following year does the top position come into focus. By 2027 at the latest, Polaris and SLR are aiming for a leadership role in the SSV T4 class.
“Sébastien Loeb is one of the greatest motorsport stars of all time,” said René Basei, vice president of Polaris Europe, Middle East, Africa and Asia Pacific. “His skill, experience and leadership will help bring our ambitious project to fruition and further advance our entire off-road racing program. The same goes for the tremendous talent and determination of the drivers, engineers and all team members at Sébastien Loeb Racing.”

XAVIER DE SOULTRAIT: A YEAR OF TRANSITION WITH SÉBASTIEN LOEB RACING
Xavier De Soultrait can rightly call himself an experienced rally raid pilot: the 2016 Baja World Champion has contested the Dakar Rally eight times as a motorcyclist. At the forthcoming edition of what is by far the most famous cross-country rally in the world, the 34-year-old Frenchman will be at the start in a four-wheeled vehicle for the first time – with a Polaris RZR Pro R in the colors of SLR. In preparation for the new challenge, he completed extensive test drives over the past few weeks and months.
“During my first few meters with a side-by-side, I thankfully had Sébastien Loeb at my side with advice and action,” Xavier looks back. “That made my switch to the new category much easier. The requirements are comparable to those of a motorcyclist. I hope that this next phase of my career lasts as long as my time on two wheels. I will be absolutely motivated and do everything I can to successfully master this challenge. The Dakar Rally is about adventure and human encounters. Against this background, I think that the story with Sébastien Loeb Racing has the potential to become something very special. Of course, the presence of Sébastien Loeb as team boss is also valuable. With his experience and knowledge of marathon sport, he can help us to move forward faster. I want to play a similar leading role as I did last time on two wheels and look forward to another exciting adventure. I can’t wait to get started!”

GOAL FOR 2027: AS A TEAM, A LEADER IN THE SSV T4 CATEGORY
The cooperation between Sébastien Loeb Racing and Polaris is long-term. The focus is initially on the two sides growing together and a continuous expansion of the partnership in order to finally provide a total of around ten vehicles for professionals and ambitious amateurs. Above all, the declared goal is to be one of the recognized and competitive players on the Rally Raid stage in the next five years.

DOMINIQUE HEINTZ – TEAM MANAGER SÉBASTIEN LOEB RACING:
“Over the past ten years, we as a team have gained a lot of formative experience. Now we want to consider new projects. The future of Sébastien Loeb Racing lies in cross-country rallies. I first came into contact with the ‘Dakar’ around 30 years ago. Since then it has played a major role in my life – so I approach this new challenge very emotionally. She is an icon that will still be of great sporting importance tomorrow.
We do not take this new task lightly. Marathon rallies require you to be good in a variety of areas. The human factor makes this motorsport discipline a special competition. The ‘Dakar’ is a particularly difficult event where we have to consider all scenarios. There is no place for coincidence.
My collaboration with Sébastien has always been down-to-earth. So we will keep a cool head and work on a competitive structure. We’re very fortunate to have a proven Rally Raid expert at our side on this project. That’s a clear advantage.
From the very beginning, SLR has sought cooperation with well-known manufacturers. This new adventure with Polaris is the logical next step. I am convinced that great things will emerge from our cooperation. We are already working intensively on it and will be ready for launch together with Polaris at the beginning of 2023.”

ABOUT POLARIS INDUSTRIES INC
Polaris Inc. (NYSE: PII) is the world leader in powersports. Since it was founded in 1954, the company has enriched people’s lives with many pioneering products, services and experiences and motivated them to discover the joy of outdoor life. The high-quality model portfolio currently includes the Polaris RANGER®, RZR® and Polaris GENERAL™ side-by-side off-road vehicles, the Sportsman® all-terrain off-road vehicles, military and commercial off-road vehicles and snowmobiles. There are also Indian Motorcycle® brand mid- and heavy-duty motorcycles, Slingshot® brand moto-roadsters, Aixam brand quads, Goupil electric vehicles, and pontoon yachts and deck boats, including the industry-leading Bennington pontoon boats. In addition, Polaris enhances the driving experience with an extensive range of robust parts, clothing and accessories. Headquartered in Minnesota, USA, Polaris ships to more than 100 countries around the world.
www.polarisgermany.de and www.polarisaustria.at