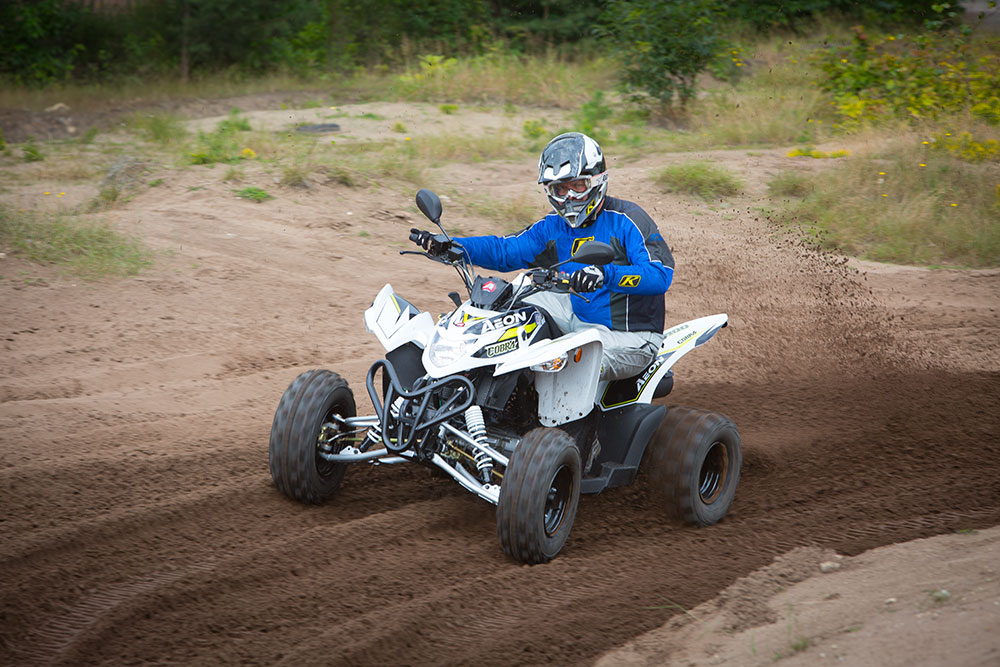 It should be a simple and reasonably priced quad and still offer a lot of driving fun? Then the new Aeon Cobra 400 EFI definitely belongs in the selection. Our driving report explains why.

The fourth generation of the fun-maker Aeon Cobra has been around since mid-2017. It is valued in the German quad scene for its good price-performance ratio. A CVT variator makes shifting unnecessary and even beginners can quickly enjoy the full driving pleasure. You can concentrate on the essentials, the driving itself. The drive force is passed on to the rear axle via a chain. Forward and backward are available as speed levels. Both are switched via a neutral position. You don’t need more for traveling.

It made its debut with a 272 cc displacement as a Cobra 320 model. Then in 2008 the update to 322 cubic meters. The Cobra 350. For 2012 then the jump to 346 ccm displacement as the Cobra 400. The latest generation 2017 has the same displacement size. Instead of using a simple carburetor, the gasoline-air mixture is now enriched using a modern Delphi injection system. The Quad therefore has the abbreviation EFI in its name. The engine is now Euro 4 compliant. With almost 20 HP / 15 kW of power, we are anything but weak and slow on the trial laps on the occasion of the quad meeting in the Fürsten Forest. 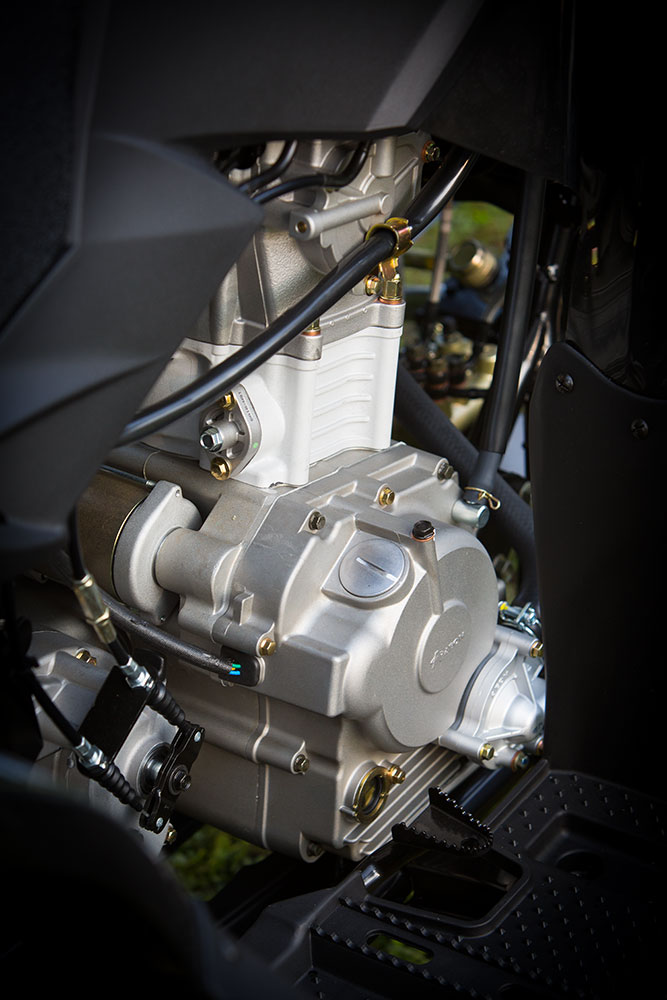 The “main attraction” of the Aeon Supercross 400 EFI that we were able to try out, however, is the new rear axle differential. The new EU vehicle classes stipulate an open differential on the rear axle in the L7e-A1 class (the Cobra 400 EFI is only permitted with 14.5 kw / 19.7 hp instead of the maximum possible 30 hp). Aeon meets the approval requirements and uses a very clever and at the same time simple differential system – and that is currently only available from Aeon. It automatically locks up to 50% via belt pulleys when cornering or off-road when a wheel starts to spin. A kind of viscous coupling.

To say it in advance. Unfortunately, we weren’t able to really test the new Aeon model in the first driving tests on the road. Nevertheless, we tried out the open differential briefly. Result: The quad circles around the bends with very little effort. The closer they are driven, the more noticeable the easy driving. Both wheels on the rear axle – which is divided into two parts by the differential – can rotate their different wheel rotations unhindered according to the radius driven. No more erasing the tires on the inside of the curve. Class. 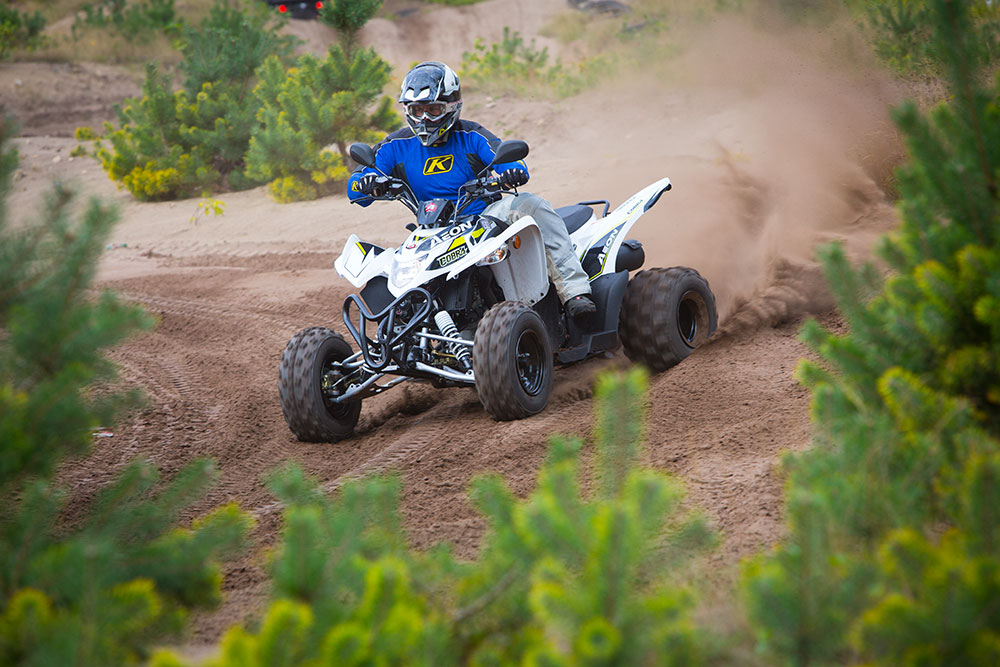 But how does the Supercross ride off-road with the open differential? And especially with the sandy conditions on site? So out on the slopes. You feel comfortable on the Aeon from the very first few meters. The narrow and not too softly padded bench allows a lot of sporty feeling for the quad. The angle of the handlebars should be adjusted to suit your personal comfort zone. For us he sat too far forward. The acceleration is above what can be expected from the engine size and power. We are lively and agile on the road, the quad reacts to every throttle command via the crisp CVT variator.

The Aeon Supercross is equipped with Duro cross tires. They bite properly in the loose sand. Many vehicles in front of us have already created deep track grooves in most parts of the test course. But the Aeon, if you keep it going well, has no problem with it despite the low ground clearance. The quad is light enough to lift out for a potential stuck. The differential locks immediately – you don’t notice it from the driver’s side – if necessary and thus ensures constant drive. How it behaves in muddy conditions, we still have to check in a more detailed test to come. The same applies to the chassis, which didn’t really convince us when it came to heavy use.

The 20 HP engine power in combination with the ready-to-drive weight of only 243 kg make driving a lot of fun straight away. Despite the power-guzzling sand underground, the Cobra pulls forward strongly. The quad can be piloted very accurately and on track. Even in the sand it is very nimble and extremely handy. The brakes grip hard. 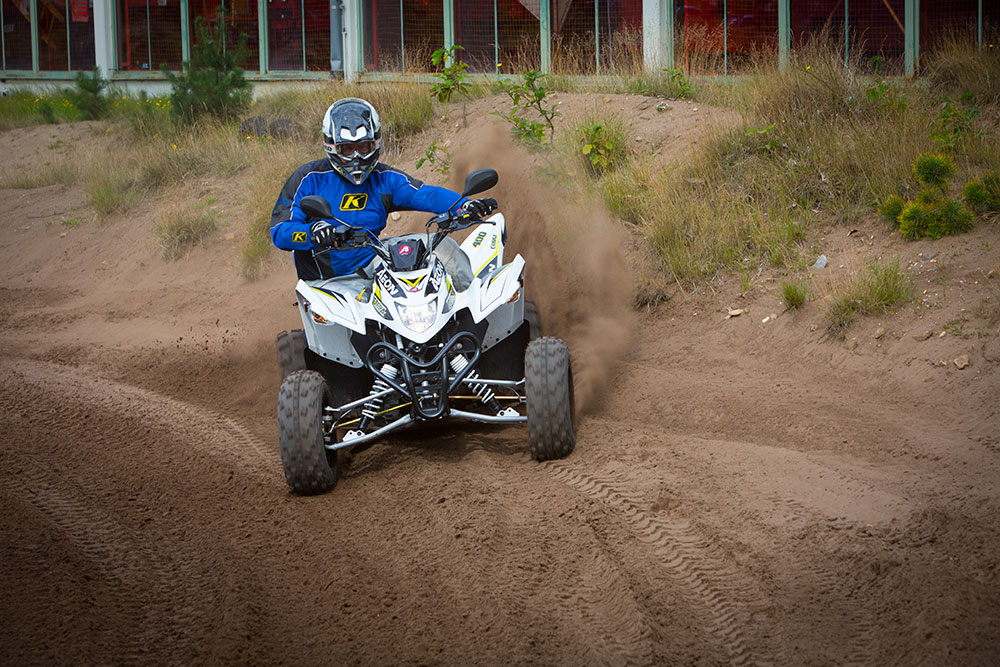 Conclusion
With the new Aeon Cobra 400 EFI Supercross model, Aeon has once again succeeded in putting an inexpensive quad with a high level of fun on its wheels. On top of that, now with Euro 4 compliant technology. In addition to its attractive appearance, it offers simple, uncomplicated handling, especially for beginners. A special price campaign is currently running. Instead of 6,499 euros, the Supercross costs 6,199 euros. Some dealers also add a “Hunni” (100 euros) for approval.

GCC Schefflenz falls into the water – not and yet the run is canceled...