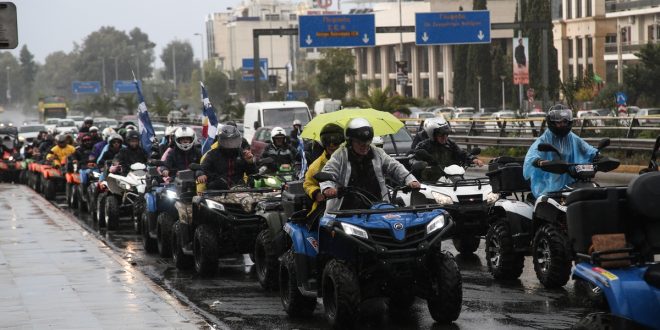 Athens, Greece – Hundreds of ATV drivers want to make a clear statement by using their vehicles to block traffic near the Ministry of Transportation. The demonstration is directed against the new traffic regulations that are intended to restrict the use of quad bikes. These regulations include the prohibition of ATVs of the displacement class 125ccm and smaller from driving on public roads. The changes are expected to come into force in 2018.

The tourism industry, which has invested in ATVs, sees itself particularly affected by this. The ATVs are offered to tourists as a safer alternative to motorcycles. A strategy that is very popular with tourists. The fear of the landlords is that they will have to close due to the restricted use of the vehicles.

With previous attempts by the organizers of these protests to negotiate with ministerial officials, ATV owners are traveling from across the country to protest the new regulations on a rainy Monday morning. Many of the protesters are residents of the surrounding islands who came across the sea by ferry.

BRP TO LAUNCH ELECTRIC MODELS FOR ALL PRODUCT LINES BY THE END 2026 –...