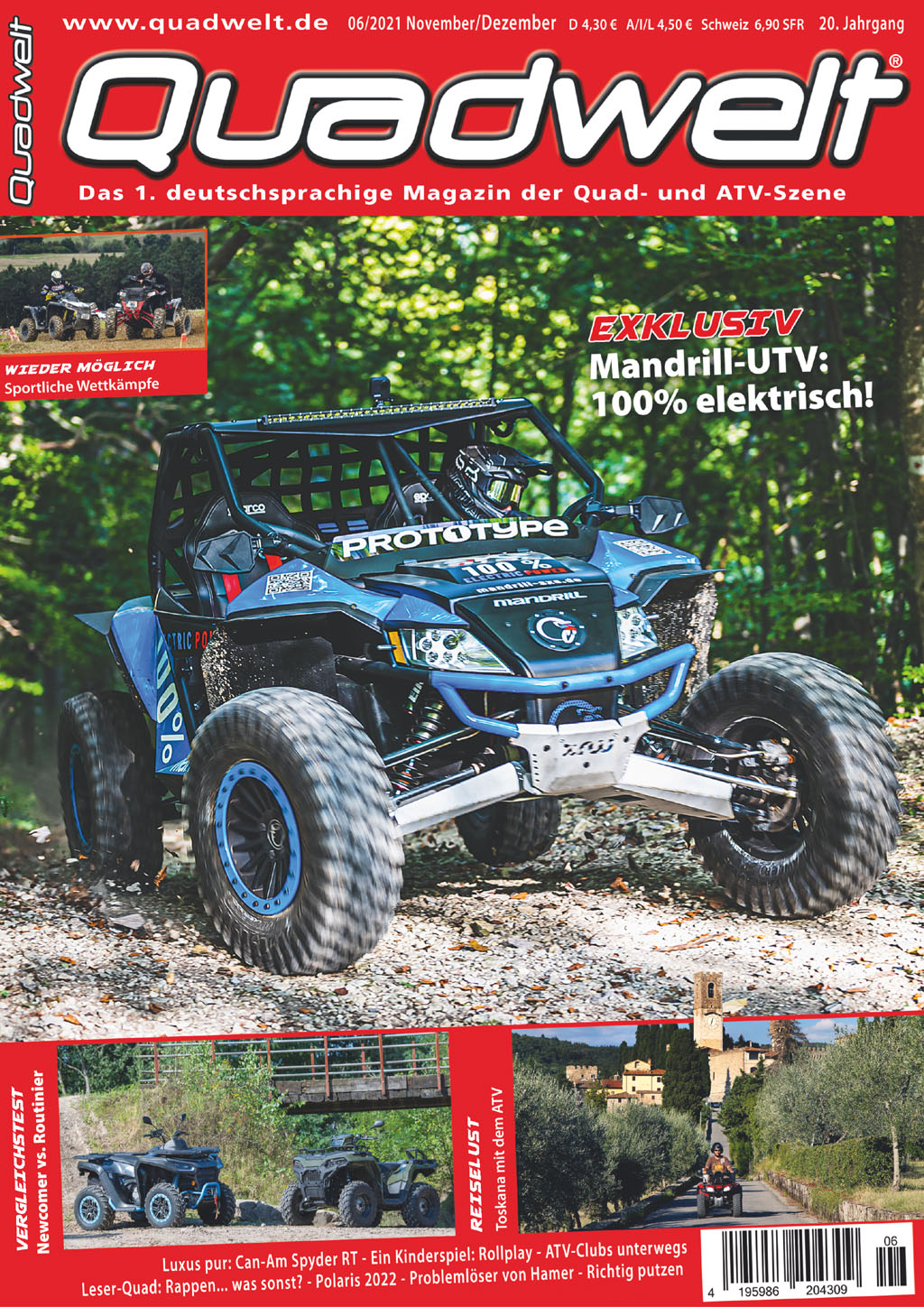 The children in our article on page 46 do not care about the type of drive. Combustion engine or electric play no role for them. The vehicle has four wheels and looks cool, so we drive it. We are no longer making it that easy for ourselves, dear readers. The automotive industry is facing a turnaround. There is hardly a manufacturer that does not offer or at least deal with e-versions of its two-, three- and four-wheelers. That doesn’t stop at our comparatively relatively manageable niche. In the area of ​​UTVs in particular, more and more vehicles with electric drives are coming onto the market. BRP, for example, is investing 300 million US dollars over the next five years to electrify existing product lines by the end of 2026, and at the beginning of 2022 the electric-powered RANGER is to take off at Polaris dealers.

Our editor Erik Pohl was able to test one of these around twelve years ago, and other brands offered us their e-versions, including a number of Asians. So the topic is not as new as the current discussions. And we don’t want to speculate at this point about whether the environmental balance of e-vehicles is more favorable or less favorable than that of modern combustion engines.
Let’s take a look into the future and thus also what is currently available that is not exempt from having fun because of its short range or few kilowatts.

So this issue is properly loaded, says

Everything that has two, three or four wheels and a motor is currently being electrified by industry. That polarizes motorsport fans, especially UTV pilots. The prototype from Mandrill is now setting new standards.

Tourers, cruisers and connoisseurs will love the Spyder RT Sea-to-Sky from Can-Am. With this on-road luxury steamer, they get their money’s worth. We’ll take a closer look.

Blasphemy or a long overdue exchange of blows? We are testing the popular and proven Sportsman 570 from Polaris against the newcomer Snarler 600 from Segway. The first-mentioned ATV is the best-selling worldwide, the other the world’s newest model from a previously unknown manufacturer.

Manoeuvrable on the trail

With the Polaris Trail S 1000, the American manufacturer is showing a compact side-by-side that we were finally able to test extensively. Our experience report.

Quadix brings Russian Mechanics to the German market. We drove the RM 800 DUO Trophy Pro and tell us how we experienced this ride.

Quadix brings Russian Mechanics to the German market. We drove the RM 800 DUO Trophy Pro and tell us how we experienced this ride.

Every beginning is cool

It has to be a raptor

Tuscany is indisputably one of the most beautiful cultural landscapes in Europe. Italy addicts have been drawn here for centuries. Just like our author Roland Marske, who has repeatedly explored this longing landscape with the ATV and admitted that he was looking forward to the meal far more than the art treasures!

Two clubs in the western Alps

During the pandemic, enthusiasts moved closer together and social media gained particular prominence. As in the case of the West Alps tour by the Quad and ATV friends Schleswig – Rendsburg together with the Fast Boys Fuhrbach Südharz.

For the third year in a row, quad enthusiasts are drawn to the small village of Kemmlitz near Mügeln in Saxony. The ATV & Quad Friends Leipzig organized another great meeting on the grounds of the MSC “White Earth”.

Full throttle across the field

The members of Offroad Riders East eV had worked towards this for a long time, investing a lot of effort, sweat and nerves – and it was worth it. The second stubble cross in Tschirma was a complete success.

Systems for all cases

The “storm of the century” with downright flash floods had catastrophic consequences for thousands of people in western Germany. Many fatalities, hundreds of injuries and immense damage. Special vehicles are needed to cope with this.

The Bamberg specialists recently secured the distribution of Renli’s buggies. Under the name Quadix Renli 1100 and 1500, the interesting vehicles are to conquer Germany, Austria and Switzerland.

From the roadshow to action

The company Matthes from Gallun was able to proudly present its conversions. The team around boss Marcus Matthes had equipped and upgraded the robust UTVs from KIOTI for use by fire brigades. In Brandenburg, representatives of the aid organizations and disaster control were able to get an idea of ​​the vehicles and test drive them.

Fun in the fun park

Fun – fun – the offroad park in Meppen already has in its name. With their weekend in August, friends of the quad dealers Moto Car Wiesmoor and Moto-Point in Brecht made this name their program. The 4WHEELS 4YOU event in Funpark Meppen was open to drivers of all brands and so many quads, ATVs and side-by-sides from all manufacturers were able to take part.

Kinderquad24.de – quads for the young

KeMa Welt GmbH from Bünde in East Westphalia operates a department specializing in children’s needs as a dealer. Various vehicles with four – or “only” two – wheels for almost all age groups are available at Kinderquad24.de. Also for different demands on quality, performance and type of drive. In addition to this, the motorsport dealers from East Westphalia also have helmets and protective clothing for kids in their range. Interest?

Eble actually organizes 4 × 4 tours with off-road buggies at home in the Black Forest. At the same time, the company is also a Segway dealer for the southern Baden region and recently everyone interested has been offered to ride these tours with a Segway Snarler, the brand new ATV from the Chinese manufacturer – an XXL test drive, so to speak.

A revolutionary air filter cleaner that is not based on solvents, is simply washed out with warm water and can therefore be easily disposed of via the drain in the workshops! There is not any? Yes, POW – Pro Offroad Wash – from Hermannsburg now has one.

The new ones for many

VBW-Tires from Kiel is known for high-quality rims and their matching tires. As a rule, the round treasures not only have a captivating look but also have the blessing of the TÜV. In connection with a corresponding parts certificate, VBW wheels can easily be entered.

Also this year the Quadfactory Beitler held its annual autumn event in the heart of Central Germany. Numerous drivers and visitors were guests at the event in September to move their vehicle in the specially created off-road area. The participants were able to find out about vehicles in the 2021 model range from CFMOTO, Stels, TGB and Linhai. In addition, children accompanied by their parents were able to use the off-road area with children’s vehicles.

Hunters have a very great responsibility to bring the game of the game they hunted onto the market as safe food. If you want to break open your piece of game in the area, this is usually done lying on the ground. It is not always easy to observe the rules of game hygiene. Heck-Pack now has a transportable solution up its sleeve, the Artemis break-up boom.

After a long Corona-related break, 86 enthusiastic Can-Am drivers with their 60 vehicles came together under the motto “Let’s come together” to take the ALLRAD HORN team from Judenburg on a trip to the SALZApartmens in Palfau.

The global rise in raw material, energy and freight costs are forcing vehicle suppliers to raise the price of their products. These increased prices will be reflected in model year 2022 vehicles. If you are clever, you can still buy now and save up to 2,400 euros – only while stocks last! Arrange your non-binding test drive at QJC PowerSportCenter today.

BALLISTOL recently expanded its range of cleaners to include a dry cleaner & detailer and is thus getting even deeper into the surface treatment of vehicles. The new pump spray has been specially developed for gentle express care without additional water and has many properties.

Into the race according to regulations

The original parts from GYTR (Genuine Yamaha Technology Racing) are also available for the YXZ1000R, which – easily converted – meets the safety regulations of the FIA ​​vehicle class T4. Practical solutions and race-ready equipment make it easier than ever to fight for a place on the podium.

Just great to enjoy a little freedom again after the forced Corona break. This is what the Windecker RZR friends thought and knocked on the door of the KTM Adventureland Suhl in Thuringia. You can’t refuse Angie anyway, and so several participants were allowed to chase their vehicles around the MX course at the end of August. All drivers had a lot of fun.

Subscription to Quadwelt Magazin, new every 2 months! Now as a subscription with a 10 percent discount!

to the subscription order form
If the form does not work for whatever reason, you can of course also send a simple email to verlag@quadwelt.de and give your full address to order the magazine.
Dealers, accessory suppliers or others who are interested in advertising can request the media data directly from the publisher.

From November 2nd, 2021, the 6/2021 issue of Quadwelt will be available from magazines for 4.30 euros on the website www.mykiosk.com there is an overview of the German sales outlets that lead the Quadwelt. The Quadwelt is also available in Austria (4.50 euros) and Switzerland (6.90 SFR) in specialist magazine shops.

Boliden at the start