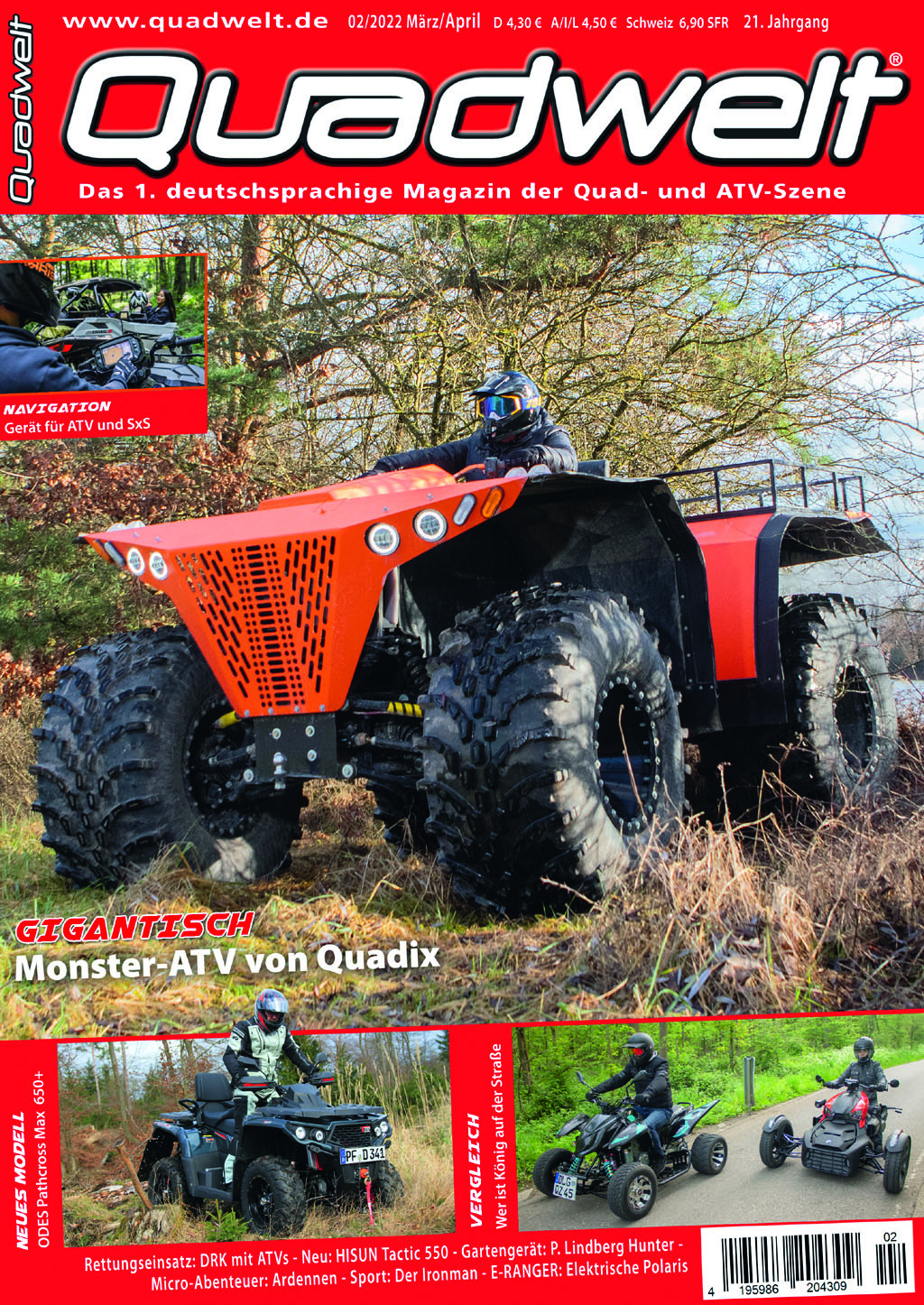 At the time of the so-called “quad boom”, some representatives of the industry – from importers, field service employees to dealers – outdid each other in the statements as to who was the largest supplier. A dealer from the Münsterland ended the discussion: he measures 2.10 meters in height. A funny anecdote today. The question of what is currently the largest vehicle in our scene should probably be answered by our cover story, Dear readers. The mega ATV from Russia tops everything that has gone before. We immediately took over the gigantic vehicle for a test drive. The measurements and dimensions alone show impressive numbers. The number of registrations has recently also reached stable values, especially those of the LoF – agricultural or forestry registrations. Good that we still have this national type of homologation. It is a reassuring number that we can report despite the ongoing corona pandemic. Anyone interested can regularly find out how many there are on our website. Another pleasing number catches the eye there: around 40,000 people like our profile on Facebook. A number that makes our team very happy and motivates us to continue to be in dialogue with you and to publish information at short notice. Especially in 2022.
Why? And one more number: 20. That’s how many years our / your quad world will be this year. We are preparing to celebrate this anniversary with you. The deadline is the publication of the issue after next, which we would like to point out today with great anticipation. We count the days.

Until then, I wish you lots of driving pleasure

On January 10th of this year our friend, comrade-in-arms and deputy editor-in-chief Frank Meyer passed away. We look back on many years together and still cannot understand the loss. We say “THANK YOU” for the great time with you, dear Frank.

HISUN is back. With a new importer and a small selection of vehicles, the brand wants to gain a foothold again. We’ll see if that can be achieved with the current 550. The name was deliberately chosen: Tactic.

We know that Siberia is big. There one calculates in other dimensions. The ATVs are also three sizes larger than ours, as Quadix is ​​now showing with a mega ATV from Russia. We drove it.

On the way on new paths

The first models of ODES were called Assailant – attacker. The importer now simply describes the new Pathcross as driving machines. Not much less martial and like a new attack in three classes. The smallest is that of the 650s. So let’s start small.

Driving pleasure, handling, suitability for everyday use, safety – these are factors by which most people in our scene judge a vehicle and often make a purchase decision. Do you need four wheels to meet the demands, or are three enough?

Eagerly awaited and electrifying from the word go: the all-new Polaris RANGER XP Kinetic is the first Utility Task Vehicle (UTV) with a whisper-quiet electric drive.

ATV as a garden tool

P. Lindberg GmbH is an international company for agricultural equipment, machines and accessories. Headquartered in Denmark, the specialists sell everything that makes work easier for farmers and landscape designers or makes it possible in the first place. And when we say “everything,” there really is “everything” available, from spades to horticultural tools to ATVs and UTVs. The latter is obvious.

The almost all-rounder from ITP

The Carlstar Group had rolled the new Terra Hook for side-by-sides into our yard. We are busy on the road and have unwound the first kilometers. Here’s the intermediate.

Garmin offers a trio of products that help off-roaders explore unknown terrain safely. Packed with features that leave nothing to be desired. The focus was on plug & play and easy handling. Did that work? We tested it on different vehicles.

Rally driving means dealing with the time factor: time pressure, time management. How does it actually work in the competitions? We took a look at the timing system behind the rallies.

Everything that comes to mind over a beer: For example, taking part in the 24-hour marathon of the German Offroad Masters as an ATV fan. The result for Tim Bruchholz is remarkable.

rescue is at hand

Accidents in rough terrain and off the beaten track regularly pose special challenges for rescue workers. The local association Prüm eV of the German Red Cross relies on its ATV to solve difficult rescue operations.

Past and current travel restrictions draw attention to lesser-known destinations. Perhaps a positive effect of the pandemic, as you discover new corners and areas on your doorstep. It’s been called a micro-adventure lately. David and Els van den Broeck went on a photo safari for us in the Ardennes.

I’ll be on my way then

The quad scene is huge. ATVs, quads and side-by-sides have been trending for many years and form a large community. Quadwelt talks to the heads of this scene, people who have created something special, are just well-known or do crazy things. Our new series starts with Martin and Katrina Freyer from weiterweg.de. The two dropouts run an off-road camp in Sweden that they set up from scratch.

Everything is the same – except for the name

Raider is now called Twix – and Procycle is now called Louis. It sounds funny, but that’s the way it is. Word has probably gotten around after all these years that Procycle is a Louis trademark. Now the Louisians have decided to sell the cleaning, care and lubricating products under their own name. They are very satisfied with the success of the brand, but hope to bring a breath of fresh air into the care business with a new name and new design, according to the company’s Hamburg headquarters.

With the Black Forest tour, the absolute classic in the program, Eble 4×4, Germany’s largest provider of tours and trips in off-road buggies, opens the season in the Baden abbreviation on April 2nd. It takes five hours on tiny streets and gravel paths over the mountain ranges of the northern Black Forest. The participants enjoy fantastic views over the Rhine plain to the Vosges.

Two dealers from Swiss MOTAX GmbH celebrate once a year. In the entire network of the general importer of SMC, TGB, STELS, online and Hytrac in the beautiful Alps, boss Daniel Hofstetter selects his best dealers. The two it “hit” are repeat offenders.

The time has come: the Quad Shop Stemper in Babenhausen is celebrating its company anniversary. Unfortunately, the planned celebration “10 Years Quad Shop Stamper” has to be canceled due to the current circumstances. But in the coming years there will be another season opening party, promises Erich Stemper, who took the step to found his own business in 2012.

From June 7th to 12th, 2022, a huge birthday party will take place on the entire grounds of the Dortmund Exhibition Center – inside and out – in honor of JAGD & HUND. The trade fair heavyweight is 40 years old and invites everyone – hunters and non-hunters alike, families, friends, young and old – to celebrate with us.

Whenever there is a new motorcycle from KTM or an existing model is further developed, something happens in Neukirchen-Vluyn soon afterwards. The German manufacturer E.-ATV consistently follows the development steps of the two-wheelers and transfers the technology used to its high-quality quads as far as possible. The latest model to leave the workshop is the E.-ATV 890 ADV, which is based on the successful “Adventure” touring motorcycle.

The specialist for high-quality accessories is Quad Briel from Frankenau in Hesse. Boss Matthias is known for providing a parts certificate for even “complicated” rims for your quads and ATVs. Such has now been granted again, namely for the STI rims of the series HD3 & HD4 & HD4 LTD & HD6.

The last two years the popular German racing series has not had it easy. Corona regularly put a fat stroke through the plans of the organizers. It was therefore not easy to set the track owners on specific dates for our racing series for the coming season, says the organizers. But the result of countless phone calls and messages is impressive. And if Aunt Corona allows it, things will finally start at the end of March.

KeMa Welt GmbH from Bünde in East Westphalia has been inspiring the scene for several years as Kinderquad24.de with a wide range of different children’s quads and bikes. However, the motorsport department of the family business also sells sport quads and ATVs for adults!

The smallest garage in the world

Quadix currently has something new in its range. Custom-fit tarpaulins for ATV and side-by-sides. It is a well-known fact that rain, dust and birds love free-standing vehicles. Cheap tarpaulins from car accessories are often too big, flap around unnecessarily in the wind and look completely out of place. They are usually of inferior quality, become brittle in the sun and only partially fulfill their purpose for us. Quadix is ​​now putting an end to this and is launching extremely high-quality tarpaulins for lots of ATVs and side-by-sides.

Subscription to Quadwelt Magazine, new every 2 months! Subscribe now with a 10 percent discount!

to the subscription order form
If the form does not work for whatever reason, you can of course also send a simple e-mail to verlag@quadwelt.de and your full address to order the magazine.
Dealers, suppliers of accessories or others who are interested in placing advertisements can request the media data directly from the publisher.

From March 2nd, 2022, issue 2/2022 of Quadwelt will be available for 4.30 euros in magazine stores, on the website www.mykiosk.com there is an overview of the German sales outlets that run the quad world. In addition, Quadwelt is also available in Austria (4.50 euros) and Switzerland (6.90 SFR) in specialist magazine stores.