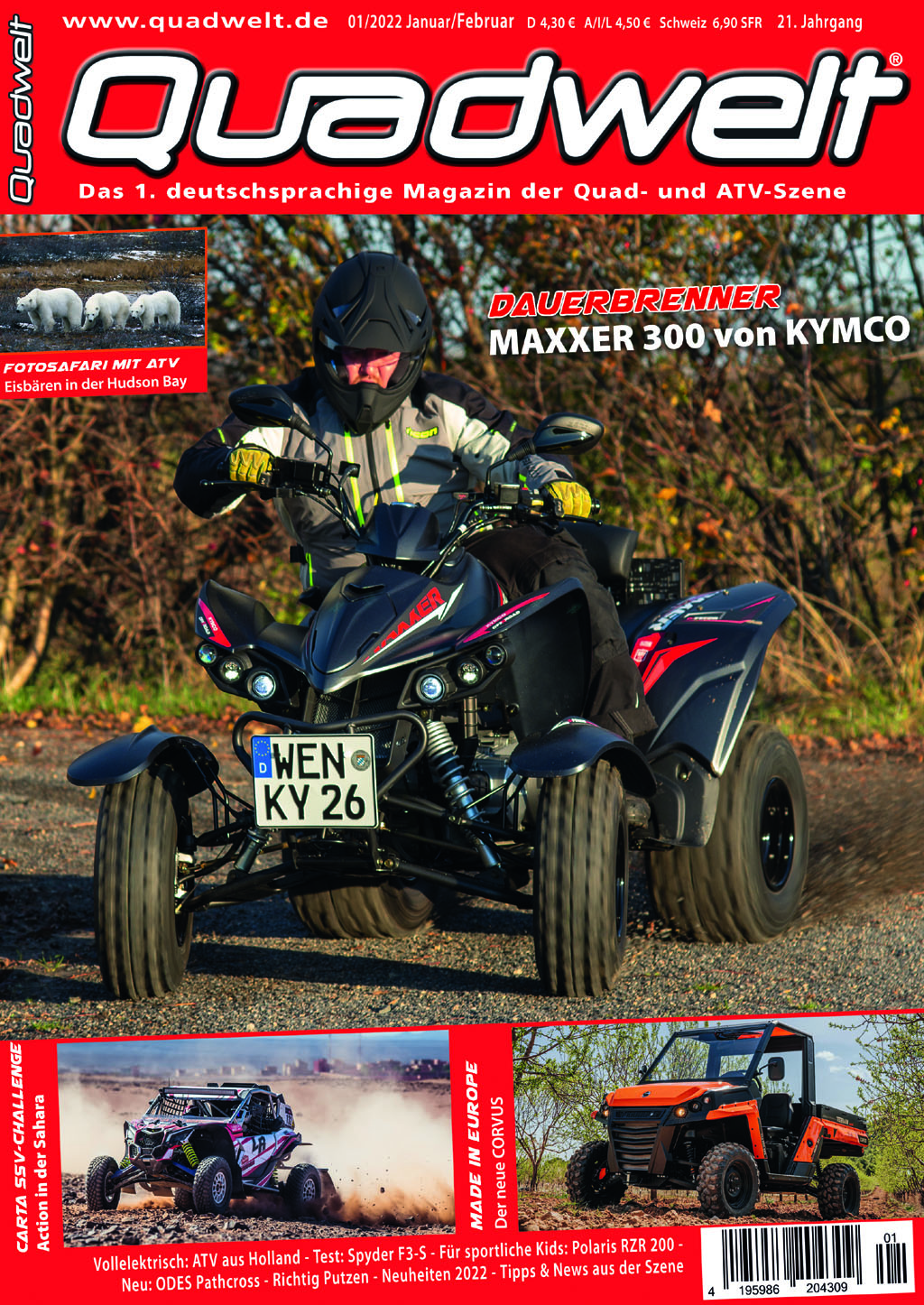 The type of drive does not matter to the children in our article on page 46. Combustion engine or electric play no role for them. The vehicle has four wheels and looks cool, so we drive it. We don’t make it that easy for ourselves anymore, dear readers. The automotive industry is facing a turnaround. There is hardly a manufacturer that does not offer or at least deal with e-versions of its two-, three- and four-wheelers. That doesn’t stop at our comparatively relatively manageable niche. In the UTV sector in particular, more and more vehicles with electric drives are coming onto the market. BRP, for example, is investing US $ 300 million over the next five years to electrify existing product lines by the end of 2026, and the electrically powered RANGER is expected to take off at Polaris dealers in early 2022.

Our editor Erik Pohl was able to test one of these around twelve years ago, and other brands offered us their e-versions, including a number of Asians. So the topic is not as new as the current discussions. And we don’t want to speculate at this point about whether the environmental balance of e-vehicles is more favorable or less favorable than that of modern combustion engines.
Let’s take a look into the future and thus also what is currently available that is not exempt from having fun because of its short range or few kilowatts.

So this issue is properly loaded, says

The last presentation of a new ATV from ODES was five years ago. In the meantime, the 800 model has been updated and courageously faced our tests and comparisons. Now the new vehicles are here and there is a whole range.

The pop star among quads

There are vehicles in our scene that are indispensable, let alone can be downsized. They have been on the market for years and inspire those who want a low-cost entry or are looking for reliability. The MAXXER from KYMCO is such a quad.

A female biker discovers the Spyder. Realization: It is neither a car nor a motorcycle, nor a quad – but you can drive it with a car driver’s license and you can feel comfortable on these three wheels. And even have a lot of fun!

A long (all terrain) vehicle

The versatile Can-Am Traxter PRO DPS HD10 can be used to transport more loads to hard-to-reach places and through terrain. The vehicle has an extra long, multifunctional charging box.

Access Motor is preparing for the new year with a wide range of vehicles and shows what the specially developed 1-cylinder engine can do.

It has been almost a year and a half since CORVUS from Spain presented us with its new work vehicles. The diesel-powered all-rounders are well received by professional users. The new model series now goes one better and is already equipped for other target groups.

UTV with a sporty touch!

Segway successfully keeps us happy. After the first ATVs – Snarler – are finally at the dealerships, we could now drive the brand new UTV Fugleman. A workhorse, a buddy, but above all a model that gets on the established models in this category.

Young wilder for the off-road offspring

Polaris is expanding its range for young off-road fans for model year 2022 with the new RZR 200 with electronic fuel injection (EFI).

From now on with a cabin

ATVs are electrically powered. This has been possible for a while, but range has been an issue so far. With the REEQ, a new player will enter the commercial market in the near future. The prototype from the Dutch manufacturer, which is completely handcrafted, was recently available to us for a first driving impression. Amazing insights awaited us.

Always on the go for the kids

In the realm of the polar bears

Exploring the Canadian Arctic by ATV? Actually, our author Roland Marske wanted to travel here with the snowmobile. But Hudson Bay freezes over from year to year later. While the polar bears gather here to hunt seals on the pack ice again, he was able to get very close with the ATV. Much too close.

Eble 4 × 4 will also have its Balkan Offroad Tour in its program in 2022. Including a compact edition trimmed for pure off-road driving with three days of driving that have it all. We’ve been there before.

Exclusively for the German-speaking area, our editor Martin Zink was there last autumn in Morocco at the start of the new event “Baja SSV Morocco”. We’ll show you what we experienced on the Baja and how it went.

Tips for clean men and women

The weekend was great. You can tell by looking at the machine. Mud and dirt from top to bottom, right into the smallest niches. The mush sticks! Is partly also dried up. How do you get that clean again?

Not just for the wrist

There used to be only wristwatches. Read off the time, maybe the date – done. Then came watches with more and more functions, time stopping, two time zones and the like. Today, so-called smartwatches can do almost anything. And now there’s Suunto 9.

ITP offers a wide range of tires. Among other things, special tires for our sporty UTVs. The German importer is the Carlstar Group, which supplied us with a set of the new Terra Hook shortly before the editorial deadline. We are already very excited and look forward to literally getting out of the curve with a driving test in the next issue.

No buttons, no modes, no problems

Highest technical standard, intuitive operation, modern design – that is the new CS ONE. The Swedish world market leader CTEK presents an adaptive battery charger and maintenance device that uses innovative technology to set new standards. Charging batteries has never been easier or safer than with this new device.

In October to Cologne

Corona did not stop at INTERMOT last year either. The leading trade fair in Cologne had to keep its gates closed because no such major event could reasonably be implemented under pandemic conditions. In the meantime, Alexander Wolff has held the position of Director of INTERMOT and has announced that the trade fair will be held next October. From October 4th to 9th, 2022, in addition to the pure exhibition and presentation of vehicles and accessories, themed worlds and special events await visitors again.

What distinguishes the perfect protector? Quite simply: optimal protection with the highest level of comfort. In other words: you or women do not feel it. The experts for prevention & protection at ORTEMA try to implement this maximum challenge with each of their products to the greatest possible extent.

It’s time for good news. After a forced Corona break, the German Cross Country Championship will start the new racing year on April 23, 2022 in Triptis. The GCC tour calendar for the anniversary season is almost complete and the Cross Country Community can use it to plan the first fixed weekends. The organizers will start registering for the series punctually on January 1st.

Automobilservice Schmitz has now made a good name for itself in the quad scene. This is certainly also due to the company’s boss’s enthusiasm for four-wheelers. Now the decision was made to include the Aeon vehicles in the offer.

Marco Kehre opened a new quad center in Enkenbach-Alsenborn last September. It is already the third location of the group of companies. Marco is also the managing director of Kfz-Meisterbetrieb Diller GmbH in Kaiserslautern, a company that he took over in May 2019.

The current developments around the corona pandemic are causing the organizers of Europe’s largest hunting fair to postpone. The new date has already been set: The 40th anniversary of JAGD & HUND will take place from June 7th to 12th, 2022 at Messe Dortmund.

P. Lindberg was founded in Denmark as early as 1855. At that time, the focus was on the sale and repair of agricultural machinery. Today the company presents itself internationally as a partner to agriculture in Germany, Denmark, Sweden and Norway. Spare parts, consumables, utility and pet supplies, feeding equipment and all other areas of the house, yard and garden can be found in the range. And also ATVs and UTVs.

All Seasons with VBW

Subscription to Quadwelt Magazin, new every 2 months! Now as a subscription with a 10 percent discount!

to the subscription order form
If the form does not work for whatever reason, you can of course also send a simple email to verlag@quadwelt.de and give your full address to order the magazine.
Dealers, accessory suppliers or others who are interested in advertising can request the media data directly from the publisher.

From January 5th, 2022, the 1/2022 issue of Quadwelt will be available from magazines for 4.30 euros on the website www.mykiosk.com there is an overview of the German sales outlets that lead the Quadwelt. The Quadwelt is also available in Austria (4.50 euros) and Switzerland (6.90 SFR) in specialist magazine shops.