ATV Quad Magazine
Home News On the sofa through the landscape 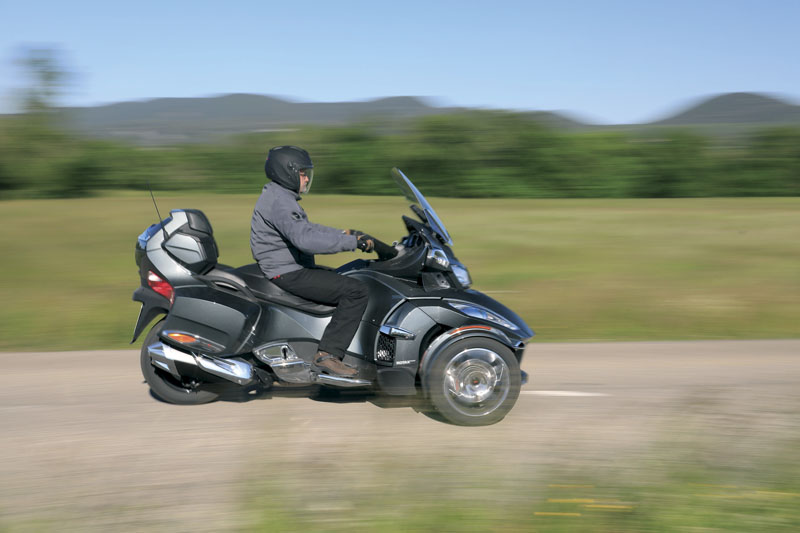 You like them – or you don’t. Can-Am’s Spyder models are polarizing. However, it’s hard to resist the fascination that emanates from them. And once you’ve tried it, you won’t want to get off. You don’t have to.

Whether you have one Spyder thinks it’s great is in the eye of the beholder and personal preferences in relation to vehicles – especially those for leisure use – also play a role. But it doesn’t matter which category you put yourself in, you take a look first.

We do that too and look at the Spyder, the RT Limited. This tricycle is a luxury tourer. Immediately thoughts of Route 66 or other legendary roads come to mind. Because just looking at it, you can clearly see that the seating furniture for longer trips was made on it. The seat test confirms this and the cockpit immediately catches the eye. A panoramic LCD color display provides information on the current operation. BRP Connect integrates vehicle-optimized smartphone apps into the display, such as navigation. At the same time, you can listen to your favorite music on the audio system with six speakers. All of these functions can be easily called up using the joystick, without taking your hands off the handlebars. Nice, because you don’t like to give up the relaxed position.

Cornering technique: Some physical exertion is required in serpentines. But don’t worry – the RT won’t leave you alone!

Another indication of the intended use and the character of the RT are provided by the integrated cases: a whopping 155 liter capacity. You can take the most important things with you and be on the road for a few days. Meanwhile, you hardly have to worry about the Spyder. Low-maintenance belt drive, a three-cylinder from Rotax with a displacement of 1330 ccm and a semi-automatic transmission with innovative Tiptronic – shifting at the push of a button. It’s hard to list everything that can be found on this Spyder’s equipment and accessory list. Further, personal inspection also brings to light again and again nice details that make mobile life easier for the driver and his passenger, even sweeten it. For example, the air-assist rear shock absorbers adjust automatically to the weight of passengers and cargo.

This is how it can be endured for a long time: Relaxed, upright sitting position and full control.

The ride says it all

I take the advertising slogan at its word and place it on the RT. The sound is unusual, when does a three-cylinder ever bubbling under your butt? The security warnings are a bit annoying, but for free. It starts with the push of a button. Smooth and almost inconspicuous. Press a button – second gear, press a button – third gear – this is how it progresses quickly to sixth gear. Brake, the speed drops and the electronics switch back automatically. So you are always in the right area. Really cool and relaxing. Because thanks to the rich torque, the Spyder comes deep out of the basement and can be moved with very little shifting. Shift up early and then let it go. If you spur the Spyder on, however, it will start sprinting. The assistance systems keep me on course. ABS and power steering are on board. The load is braked by means of a brake pedal, which effectively acts on and decelerates all three wheels with hydraulic disc brakes. The whole thing never gets out of control.

Wide curves: The Spyder will rock the thing.

I’m following a group of motorbikes. The friends on two wheels meander through a serpentine road. This doesn’t go quite so quickly with the touring steamer, some physical effort is required. When accelerating and when going straight, the stability control system intervenes and keeps the load on course. I first experienced how effective the traction control actually works on wet roads, where I sometimes felt a slight feeling of “drifting” when driving briskly. Experienced Spyder riders will soon learn about optimal braking and angling. Expansively and with the necessary composure – which the RT conveys quite quickly – I enjoy the winding route. Then it continues in open countryside. Cruising is hip. Splendid! The Spyder can certainly do that best. I find the seating position to be absolutely comfortable. Whether in the front or behind, the space is sufficient and relaxed. Longer, consistent journeys are easily completed with the cruise control. The adjustable windshield protects against the effects of wind and rain.

A long list: Can-Am has equipped the RT lavishly. Many accessories are available.

Large flap(s): A total of 155 liters of “trunk” is good for luggage on long journeys.

Panorama: The lush cockpit is just as interesting as the landscape around it.

Everything under control: With the RT, most things work at the push of a button.

For safety: braking system with ABS.

It is fun! Cruising and enjoying the landscape has something of freedom and joie de vivre. The comfortable chassis doesn’t let me perceive any bumps. Am I effeminate now or just a connoisseur? I find myself having so much fun riding the tricycle. Similar to motorcycling and quad biking, just a little different. Regardless, it’s hard to resist the allure of three-wheelers like the Spyder RT. Whether you are a fan of two, three or four wheels. It’s also more than a vehicle for chopper fans who, for whatever reason, don’t have a motorcycle license. Annual meetings and the increasing number of spyders in the scene speak a language of their own. In any case, with the RT model, Can-Am delivers the stuff for touring dreams on three wheels.