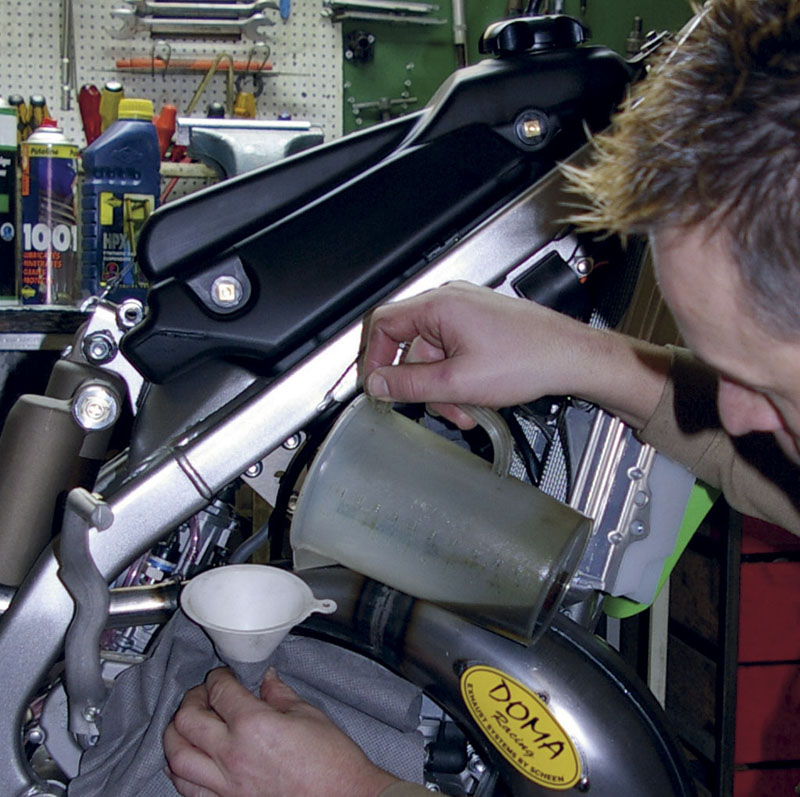 Anyone who regularly drives their ATV, quad or side-by-side has to change their oil sooner or later. We’ll show you how to do it right.

Engine oil lubricates the moving parts in the engine. The most important task is to protect materials rubbing against each other from wear. The seal between the piston (ring) and the inner cylinder wall is at the top of the “to-do list” for the oil. It prevents combustion residues from entering the engine compartment from the cylinder. But engine oil has a lot of other tasks to do that are no less important. Many engine manufacturers are therefore already working closely with the lubricant experts when developing new drive units.

Well lubricated: The path of the oil to the lubrication points in the ATV engine

Each engine has different levels of stress on the engine oil used. Large and small units therefore also have different demands on the lubricant. For this reason, the manufacturers of the engines and vehicles often specify which oils can be used in the engine. You should definitely stick to that. Experiments are dangerous for the engine. Therefore: Before changing, find out exactly which oil must be used, pay particular attention to the viscosity. Ask for the correct filling quantity at the same time. Most of the time, this information is in the logbook.

The do-it-yourself screwdriver only needs a few tools to change the oil itself. Important: there should be a container for the oil that is running out. Attempts with bottles are nonsensical. Simple collecting trays are available for a few euros in the hardware store. Also important: proper gloves, which are ideally oil-impermeable. After all, the oil to be changed is hot and burns should be avoided. The right screwing tool for the oil drain plug is also required. Important: in order not to dislocate yourself, access ramps should be used. Then you can work comfortably under the ATV. Roller boards are to be understood as a luxury. So you roll under the vehicle and don’t lie in the dirt. Nothing more is necessary.

Nothing works without oil: the lubricant prevents wear and tear on the gearbox, prevents wear, and makes shifting possible in the first place.

A book with seven seals: Oil is produced in a complex process.

Expensive but safe: Many manufacturers recommend “own” oils.

Where to get the parts from

Those who order oil, filters and sealing rings themselves are quickly spoiled for choice. We prefer reputable sources as our vehicles cost thousands of euros and bad spare parts can quickly lead to major damage. Which oil is the right one? The range of lubricants is large. In no case should you take the “cheap plempe” from the hardware store. But even the best high-tech oil for cars has no place in the quad engine either. Even an expensive oil can be the wrong one if it does not meet the relevant requirements. Special lubricants have been developed for motorcycle and quad engines, as the operating conditions of such units differ significantly from those in cars. Higher speed, piston speed and liter output put extreme stress on the oil. Even the most expensive, synthetic low-viscosity oil for car engines will not prove itself in most quads because they are equipped with a wet clutch. The friction reducers in the car oil cause the clutch to slip and the power transmission would no longer exist. Cheap oils, on the other hand, can also stick the clutch plates under certain circumstances. In the case of a quad, the transmission is usually also supplied via the engine’s oil circuit.

Has to endure or compensate for something: Without high-performance oil, pistons and gears “eat up”.

First of all: warm up the engine. The old oil is easier to change when it is warm. So: do a few laps and then go to the workshop. The vehicle should stand a little higher and the oil drain plug should be the lowest point. Drive the ATV or quad onto the ramps and secure them properly. Means: put the handbrake on and put a wedge in front of the wheels. Then put on gloves and get under the vehicle. After the collecting container has been positioned, the drain screw is unscrewed and secured. The sealing ring should not be reused, but replaced. Caution: the oil is hot! It should be able to elapse for a few minutes. It can be checked whether there is anything in the oil that does not belong there. Metal shavings, for example. Some vehicle models have a magnetic drain plug. Chips and abrasion then collect there. If the amount adhering appears questionable, a specialist may have to check what is going on. Unusual discoloration of the oil also indicates possible engine damage. If it foams, for example, there is even water involved. Sucked in at the last meeting in the mud bath? Who knows?

Control is good: Check the correct amount on the sight glass and with the dipstick.

Overfilling is just as harmful as too little oil!

Smell test: If the oil “stinks” it is high time for a change!

Made easy: raise the vehicle, put the tub under it and lower it.

Important: the right oil in the right amount. This is in the manual, together with the viscosity!

After the oil has drained, the oil filter must be changed. Often this is easily accessible and can be solved easily. Important: when the new filter is screwed on, the seals must be coated with oil. Tip: only tighten hand-tight. Some filters have to be filled with oil. A look at the log book helps. After the oil drain plug has been fitted with a new sealing ring and screwed in again, the new oil can be added. It is important to ensure that the specified amount is filled. In quarter-liter steps you can check exactly whether the amount is correct.

Oil must be disposed of properly and safely. The sellers are obliged to take back used oil. It is easier in the municipal recycling centers. For a few euros you can hand in the old oil there and you can be sure that the environment will not be harmed. The parts used should come from reputable sources and the environmental requirements must be strictly observed.