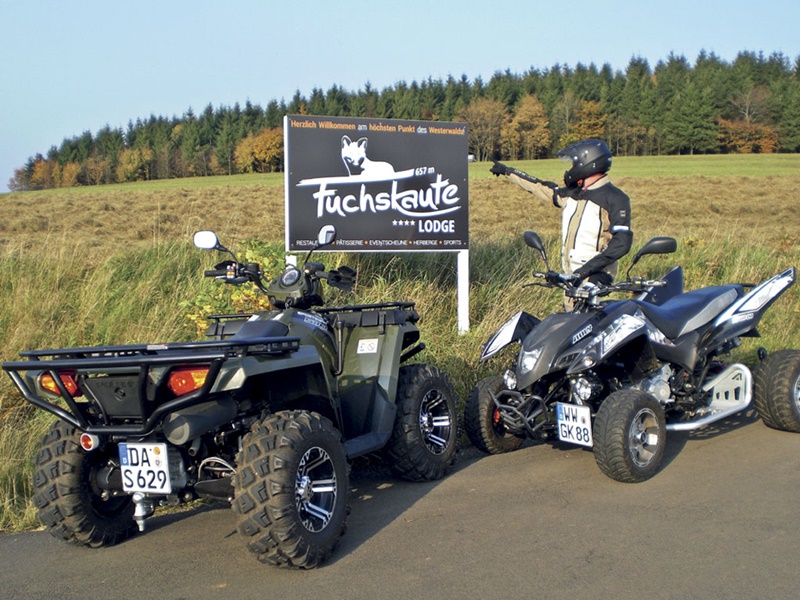 This is not the first time that the low mountain range in the west has been the destination for a leisurely day tour. The season doesn’t really play a role, because the appealing environment has its own special charm whatever the weather, as the well-known song aptly describes.

Dierdorf is a suitable starting point for a day tour. The town is close to the A3 between Cologne and Frankfurt and right in the middle of the Westerwald. On the outskirts we have an appointment with Guido Krämer, who has only been driving a quad for two years and has been exploring his homeland in a completely new way since then with growing enthusiasm. We trust Guido’s local knowledge and let us be taken on a rather arbitrarily planned round. The free car park at the Aquafit indoor pool at the B 413 roundabout is large enough to park cars and trailers. A small snack bar is also ideal for a coffee before you set off.

To the north, our first stage destination is the district town of Altenkirchen. We come to the center of the city via little-traveled roads via Puderbach, Fluterschen and Almersbach. There we come across the B 8 or the B 256, which we follow to Eichelhardt. To the right, continue on the L 290 and L 289 and other country roads until we reach the Marienstatt Abbey. The driven 25 kilometers were the purest roller coaster. Hardly a straight line, and the roads follow every elevation and valley. An ingenious route that we drive almost alone.

Everywhere a car or a bus, then it can get tight. So always full attention. The area is also called “Kroppacher Switzerland”, and the topography is right at least once in a while. If you like, you can take a break at the Marienstatter Brauhaus, and it is definitely worth taking a look at the abbey and the garden. We are drawn to the next stage destination Hachenburg. A nice town with a historic market square and lots of charm. We take the time for a coffee and get in touch with a few Westerwäldern immediately, which is not difficult at all. The “Wäller” are quite rough fellows, but above all one thing, namely sociable. Depending on the location, however, it can be difficult to communicate because the different dialects are sometimes extreme. Fortunately, we have our local guide Guido with us, who, as a translator, familiarizes us with the linguistic peculiarities.

Time is running out, as always with a planned tour. We still have a few intermediate destinations on the list and are heading towards Bad Marienberg. Guido leads us over winding district roads and also over a few faster stages on country roads through the typical landscape, in which dense forests and wide fields alternate. It goes up and down all the time, which is what makes the tour so interesting. Due to time constraints, we are ignoring a regional attraction. The Stöffel Park is a former mining and industrial site that today attracts tourists as a museum and adventure park.

Worth seeing. Along the Nister, a small stream, we follow the signs to the wildlife park near Bad Marienberg. A highlight on a long day tour for any kids who might be traveling with you. Here the little ones can let off steam in a large playground. Right next to it, the Hedwigsturm can be climbed for a great view.

Also worth a visit is the Steig-Alm, a piece of the Alps in the middle of the Westerwald. If you are hungry, go in there! Or is it better to wait until our next highlight? There, where the Westerwald is highest, the fox says “good night” to the hare and retreats into his cave, the “fox chew”. We are there at 657 meters above sea level and can only recommend a stop at the Fuchskaute Lodge. Great ambience and worth a visit at any time of the year. The lodge is also an affordable place to stay.

The triangle between North Rhine-Westphalia, Rhineland-Palatinate and Hesse is only a stone’s throw away. We follow the border between Rhineland and Hesse and take a quick look at the Krombachtalsperre, a popular local recreation area, not to be confused with the lake from the well-known beer advertising. At least as attractive, especially in summer, is the Wiesensee, which we reach shortly afterwards via Rehe, Rennerod and Pottum. For us the weather is unfortunately not right at all, in late autumn there is nothing with swimming in the lake. But we will definitely come back sometime.

The daylight is also slowly waning, which drives us back to the starting point of our tour. Always heading west, we continue to avoid the existing, almost straight federal roads and still go around the Dreifelder Weiher. When it gets dark we reach Dierdorf and are happy that the snack bar is still open. One last coffee and we say goodbye to our guide Guido. A great day with many impressions that we will definitely repeat again in summer. Maybe you will meet on the way?

The shoe for the extra mile