ATV Quad Magazine
Home News Like in the old days 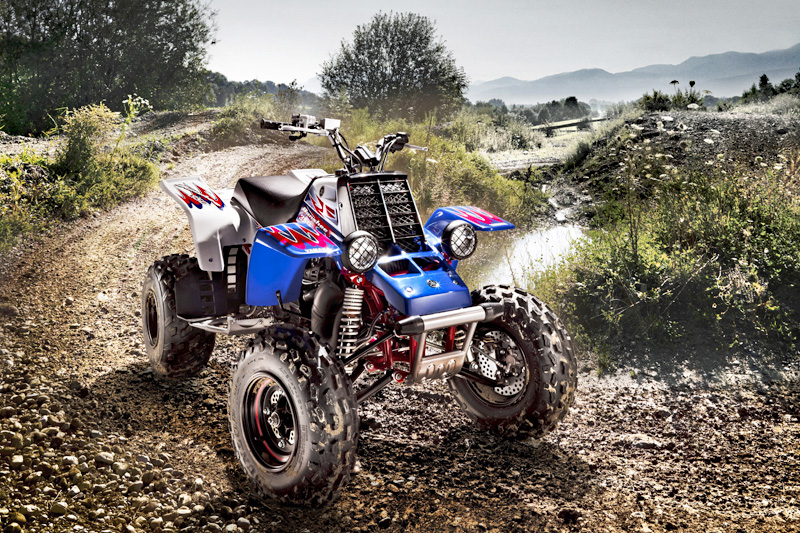 It’s not easy for quads at the moment. Changed licensing conditions and the market in general shake the rear-wheel drive vehicle through mightily. It is they who arouse emotions and make us rave. We show three vehicles that influenced the history of quads.

The sound, the smell, the pace – and the Yamaha Banshee has scurried by. The two-stroke scent lingers in the air for a long time, you can still hear it, the quad is long around the corner. Who, if you please, can escape the fascination of this legend? Probably not someone who has anything to do with or is interested in quads. Anyone who has one no longer gives it up and speaks of it almost reverently. Why?

Striking design: The Yamaha is unmistakable and shaped the market for almost 30 years.

A look in the history book gives one possible answer: When Yamaha introduced the Banshee in 1987, nobody cared about gasoline consumption. Not even for roadworthiness, homologation or other trivialities. In return, the focus was all the more on the athlete’s technique. 350 cubic meters distributed over two cylinders, which activate a good 35 kW (52 hp). The drive unit comes from the road motorcycle RD 350, at the time one of the sportiest two-wheelers ever and one that still makes fans’ eyes wet today. In contrast to the “moped”, Yamaha did without an exhaust control on the Banshee. The inlet channel is typically controlled by a membrane. A well and clearly shiftable six-speed transmission does the rest of the brisk propulsion. The banshee is legendary. No other quad stands more clearly for the American term from motorsport “high performance”, as this quad was already in series production. The two-stroke engine par excellence is associated with it. Anyone who has driven the two-cylinder once will remember the adrenaline rush that the catapult-like acceleration triggered for a long time. The long presence on the market and in sports gave the Banshee an almost unmistakable range of accessories. Yamaha stopped production in 2011.

Lighter: The two-cylinder is a typical, aggressive two-stroke.

Inspirational: The “fairy” – as Banshee is translated – still encourages the tuners.

Inspired: The banshee influenced the cross scene for many years.

At around the same time, Honda was writing a success story. The Japanese transplanted the engine of a CR 250 R – at the time the “non plus ultra” in motocross sport – into a new type of quad frame with an extremely low center of gravity and a light front section. The stern has been lowered. If you look at today’s sport quads, you will discover a lot of similarity with this concept. Noble blacksmiths like Walsh from the USA have copied the construction to such an extent that Honda plastic fits without any problems. The mentioned engine is like the Banshee a two-stroke, but with only one cylinder.

However, it has it all and also releases around 54 hp, which cavort in the upper speed range. The TRX 250 R was mainly to be found on MX tracks, where it had to stand up to the Kawasaki Tecate and Suzuki’s “Quadzilla”. Despite the great success with the athletes and the ingenious design, the vehicle did not have such a long presence on the market. From 1986 to 1989 Honda built the Racer, but kept the spare parts in stock for a few years. Original parts are difficult today and if so, they can usually only be obtained from the USA. However, TRX owners also use the replica parts from the tuning companies. Following on from its heyday in Quad-MX, Honda initially launched the TRX 400, for which the four-stroke XR Enduro was transplanted into the two-stroke chassis. Later there was a liquid-cooled 450 with four-stroke engine, again a counterpart from the two-wheeler sector, namely the CR 450 R. Unfortunately, the quad is no longer officially available in Germany, but is still part of the local scene and delights crossers at every race. No wonder – with the chassis.

Tuning: The concept lives on in luxury forges; like here at Walsh.

Single-cylinder two-stroke: The 250 engine comes from a pure MX motorcycle.

An original TRX 250 R that has not been tinkered with is hard to come by.

Yes, you read that right! The little Taiwanese woman is definitely one of the series of quads that made history! A quad that literally triggered a buying frenzy. This little machine contributed to the four-wheeler boom at the beginning of the millennium. Because suddenly they were there! In the hardware store, at the bicycle dealer, in the motorcycle shop, on the Internet, in the mail order catalog, at all quad dealers … everywhere you came across the 150 SMC.

Pioneering work: The small SMC helped the quads in Europe on the jumps.

The quad was originally intended to serve the American leisure market. But at SMC you quickly noticed that Europeans are also crazy about cheap four-wheelers. That was the beginning of a sales strategy that is hard to understand. The SMC quads were launched on the German market, but were seldom identified as SMC. At least not because of the innumerable names that the importers gave the vehicles. Skyhawk, Kasea, Barossa, Kreidler, these are just a few of them. The different model names such as Stinger, Tomahawk, Ram, Rex etc. were really confusing. When the 170 models were added shortly afterwards, the confusion was complete. Nonetheless, the SMC quads were in demand. It had never existed before: an affordable recreational vehicle of acceptable quality and sporty character, you could hardly ignore it. The Quadwelt test crew also had the pleasure of exploring the capabilities of this price breaker at the time. The four-wheeler opened up unimagined opportunities for the youngsters. Slight chassis tuning was allowed, but none on the single cylinder. The first four-wheeled youth crossers met at the start gates on equivalent quads. Some of the youngsters from that time are now successful quad riders. And even more people who came to quad biking in the 150/170 are now driving cars with significantly more cubic capacity and even more enthusiasm.

Wacker, the small SMC convinced so many people to ride a quad.

The aftermarket had reacted: There was everything there was for the “big guys”.

Interpretations: Different “brands” and model names, different areas of application. A separate SMC for every taste.

There are still quite a few quads that could be shown at this point – no, you would have to! Okay – we look forward to all your posts on Facebook and your suggestions for legendary quads.

Out of thin air

Bring it on flooring