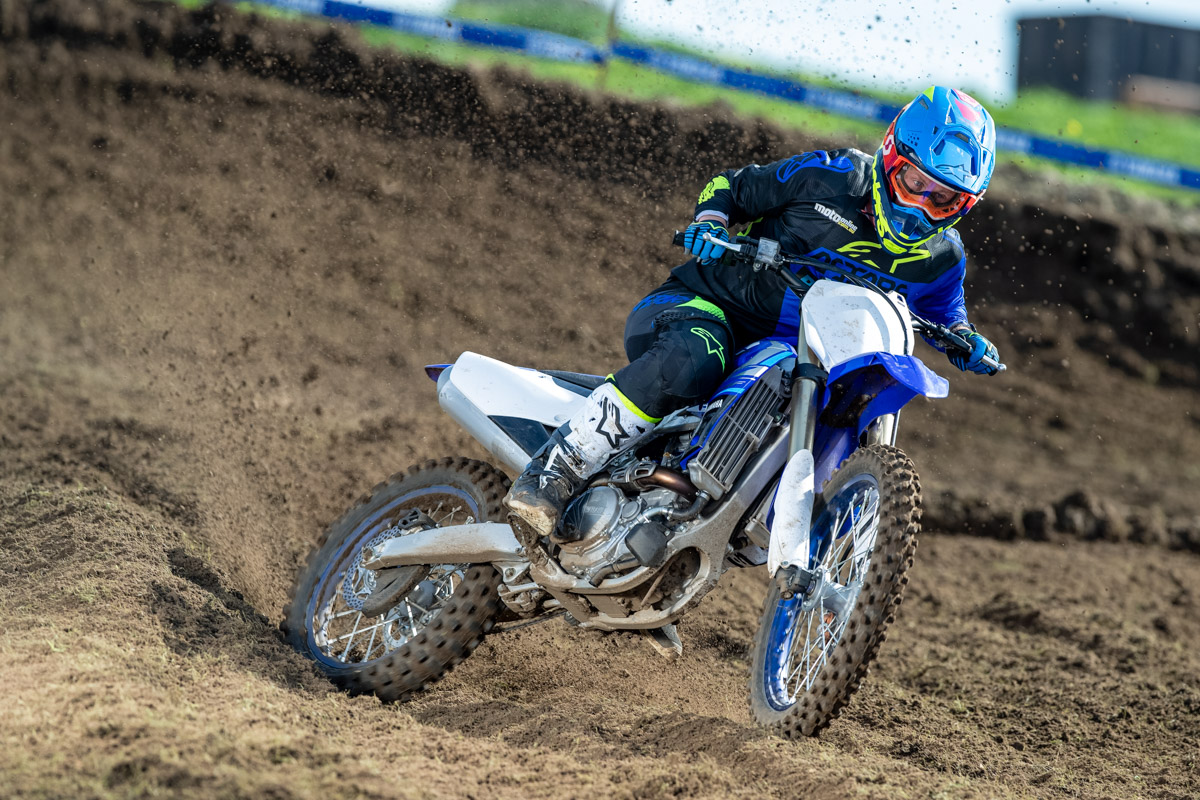 After undergoing an overhaul for 2018 and being introduced as a new-generation model, the ever-popular Yamaha YZ450F has been at the forefront of success, collecting last year’s MX Nationals MX1 crown with Dean Ferris at the helm in addition to taking a share of wins this year with CDR Yamaha Monster Energy’s Luke Clout and Kirk Gibbs. For 2020, the YZ450F has once again received a series of exciting updates and enhancements, building on what was already a competitive package.

Where we rode:
It was a typical cold and arctic Melbourne day at Yamaha Park4MX for the 2020 Yamaha YZ450F media launch and, fortunately, luck was on our side as the rain steered clear of venue, offering perfect riding conditions. Having the circuit in its prime made testing the new YZ450F so enjoyable as the track formed up nicely considering the number of riders on track. The Park4MX layout serves up an excellent testing ground to put the new YZ450F through the motions.

Technical features:
Three key elements to the 2020 Yamaha YZ450F are that it’s easier to turn, provides a more comfortable ride and boasts an engine that produces greater and more usable power. Two of those features are achieved by the new lighter aluminium frame. Yamaha has reduced the weight of the frame and introduced more flex by incorporating thinner main spars (tank rails), thicker bottom tubes and updated engine mounts – the top mounts have changed from aluminium to steel and the bottom from steel to aluminium, along with changing shape. The top triple clamp is 47 grams lighter and has a less rigid design, the ‘bar mounts have been placed 15mm further forward and 5mm lower for more room in the cockpit. The front axle rigidity has been reduced by 20 per cent and is 35 grams lighter, which is designed to deliver more forgiving feedback in the front-end. The newly-designed compact cylinder-head is 300 grams lighter, the piston has had a weight reduction and updated compression ratio. Matched with the slimmer exhaust cam profile and one-degree less overlap, increased air-flow through the free-flow high-seal air-filter and wider diameter exhaust flange is what delivers the really strong power output. In addition to these upgrades, the new 2020 Yamaha YZ450F also features updated brakes – the front brake has a newly-designed calliper, progressive pad material, larger contact pad and a lighter 270mm front disc. The rear brake calliper shares the same weight-saving upgrade and the disc is reshaped, while it has the addition of more cooling holes to optimise heat reduction for those heavy brake draggers. The seat foam is 10 per cent stiffer, which provides easier mobility on the bike, the footpegs have a slimmer profile while maintaining the same footprint area and are 68 grams lighter.

Engine characteristics:
There is no denying that year after year, Yamaha delivers one of the strongest engine packages on the market. The great advantage in the modern era is that Yamaha offers an adjustable ECU mapping switch, which in this case, is extremely noticeable. On map one – when the blue light is not illuminated – the engine is so strong and torquey right throughout, it was simply just a set and forget in third gear around the Park4MX circuit. It has such a strong and aggressive bottom-end that it just rockets you out of any tight turn with ease and keeps carrying that punch all the way through the rev range. The downside of map one is simply that I feel like you would have to have razor-sharp fitness to ride the bike to its potential for extended periods of time. Yamaha has a 50/50 balanced footprint with their reverse engine design and, with the amount of torque that it produces, I found that on map one the front-end kept getting light out of the corners from the sheer amount of torque and initial punch that the engine was producing, which made it harder to be really precise on the next part of the track. However, when you select map two it becomes a totally different machine, still equipped with all the power you need, just delivering a lot smoother and more useable delivery. It’s really rider-friendly and helps you ride this bike at speed for a longer amount of time. Map two transforms the package and invites you to ride it harder, while being a lot more stable and consistent throughout the whole cornering process as a result.

Chassis feedback:
As mentioned, Yamaha has reduced weight from the frame and made it more flexible at the same time – this definitely provides more smooth and comfortable feedback throughout the bike by eliminating the little bit of harshness it used to deliver when hitting the small, chattery bumps on the gas. The Japanese manufacturer has decided to firm up the front fork setting to compensate for the more flexible frame and, because of that, it offers a rigid feeling of sorts while riding through the braking bumps. I didn’t find it affected the steering because it seems to be really plush in the initial part of the stroke, before firming up more rapidly as it passed that point – making for a little uncomfortable transition as the fork became deeper in the stroke. Setting the bike up purposely for your riding level and size will solve this though. The shock, on the other hand, has also had a setting update, but it doesn’t really do anything out of the ordinary. Once you set the sag to the correct weight of the rider, it’s a pretty consistent and predictable shock, which is true to KYB form. The more you try to tame the harsh-type of feeling in the forks by softening them off, naturally the shock becomes more lively when braking for the turns, so it’s a case of coming to a compromise and splitting the difference to get the most balanced set-up. Yamaha has put a big emphasis into getting this bike really consistent throughout the turns though and this model is by far the easiest YZ to corner – it feels a lot more planted and predictable than its predecessor, which really gives you the confidence to attack the turns without feeling like it’s going to stand you up halfway through. Overall, a wide range of riders will take confidence from this package.

Final thoughts:
The 2020 Yamaha YZ450F is a really good base bike, no matter where you want to ride it or at what level. It really is an all-rounder with the amount of adjustability that it provides via the Power Tuner app – it feels like multiple different bikes in the one trim, which is a bargain for any rider and you’ll find usages for all of the options. The seat and ergonomics are just as comfortable as a Yamaha has always been and, if I was to criticise anything, it would be the fact it still feels quite wide beneath you. In saying that, after 30 minutes of riding, this feels completely natural and it’s something that you quickly adjust to. Collectively, you can see why the updated YZ450F from Yamaha has proven so popular already both here in Australia and globally.