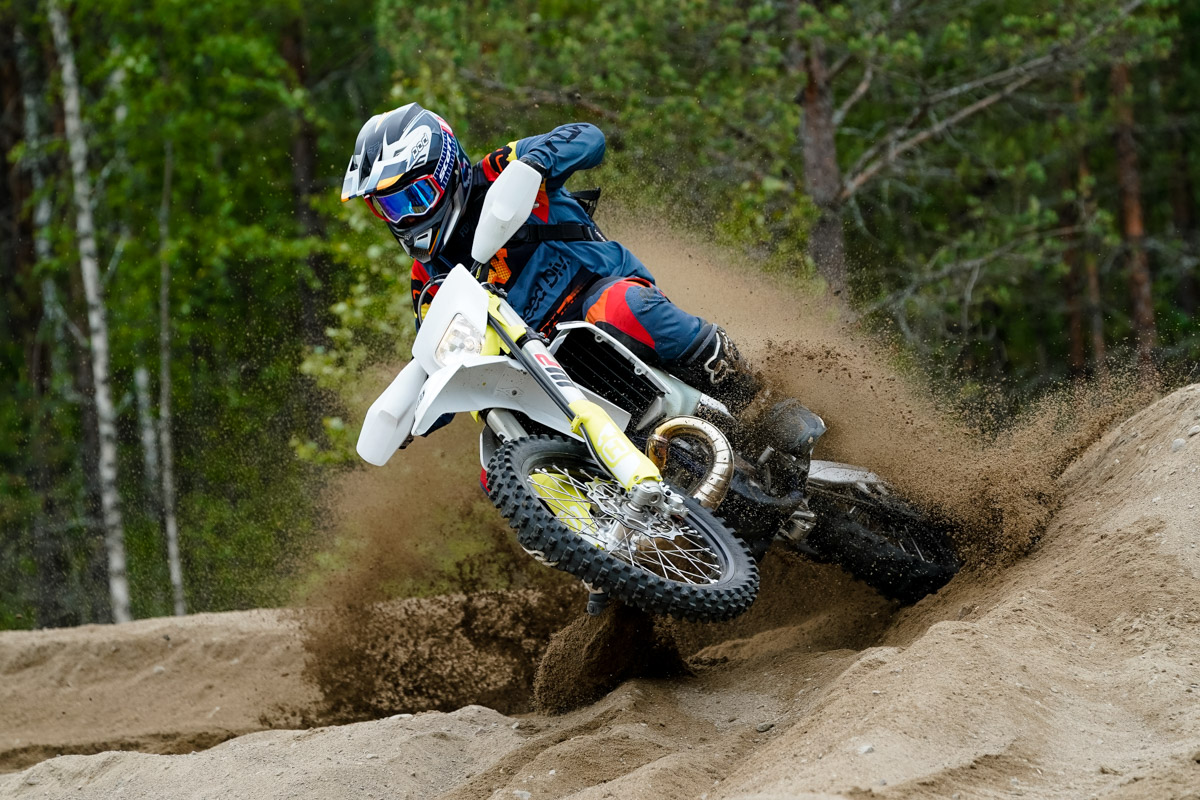 Husqvarna Motorcycles recently hosted its FE and TE international media launch in Jamsa, Finland, where the new generation of enduro bikes were presented to the world’s motorcycle press. Motoonline.com.au were fortunate to be included on the invite list to sample the entire range, including TE 150i, 250i and 300i two-stroke models.

Where we rode:
The global media launch was held at in Jamsa, a four-hour drive from Finland’s capital city, Helsinki. The Jamsa complex consisted of a motocross track as well as backing onto a large wooded area with about 10 kilometres of off-road trails. The trail included slow, technical, and whooped out single trail, to rocky ledge outcrops with technical climbs and descents. Along with that, it had its fair share of fast flowing corners and sandy straights, which gave us plenty of opportunity to fully gauge what the new-generation Husqvarna TE models were all about.

Technical features:
The Husqvarna TE 150i has been included into the stable of fuel injected two-strokes for 2020, with the entire range being redesigned and upgraded for the new year model. During the development of the 2020 motorcycles, focus has primarily been put on the way the motorcycles handles while increasing power and rideability. The suspension, chassis and engine packages have been overhauled, with 60 percent of the componentry being completely brand new. The two-stroke range has had revisions specifically to the engine management systems, which has made the bikes easier to ride and ironed out the kinks from the previous generation while producing more usable power. Adding to the engine changes is a new exhaust package that’s been significantly developed. It’s somewhat evident in the new design expansion chambers, offering more ground clearance and approximately 200g weight reduction. You’ll also notice the corrugated surface on the expansion chamber which is designed to be more durable. The engine now sits slightly different to the previous generation, now one-degree lower to aid in handling and front wheel traction. The radiators have also been redesigned and are now more efficient as well as being lowered by 12mm, centralising the motorcycles mass. WP has continued to developed the suspension package further with new internal settings and a new linkage. New bodywork and subframe have made the cockpit of the motorcycle narrower and more rider friendly and easier to grip with you knees, while the most noticeable change is the exhaust side number plate being symmetrical to the opposite. The subframe is now a two-piece design, which is different from the three-piece subframe used on the previous generation. The airbox has been redesigned and now gives better air flow. Into its second generation of use, Husqvarna has adopted a counter balancer shaft which greatly limits vibration through the motorcycle. As per usual, Husqvarna continues to use a DDS (dampered diaphragm steel) Magura hydraulic clutch, Magura brakes, Pro Taper handlebars, composite carbon-fibre subframe, CNC machined triple clamps, tool-less air filter access, 8.5 litre fuel tank with quick release cap and better fuel flow, black alloy high strength DID rims, ODI lock-on grips, electric starter with compact Li-ion battery, and a handlebar mounted mapping switch with a selection of two ignition curves.

Chassis feedback:
Husqvarna’s revisions to the chrome-moly steel frame include increased longitudinal and torsional rigidity, improving stability and energy absorption, while having new engine mounting brackets that are one-degree lower increase front end feel and traction. Working with the new frame specs, WP has stepped up with the second generation of Xplor 48mm forks and WP XACT shock. The spring fork has a split rebound and damping functions, with compression damping on the left fork leg and the rebound takes care of the right fork leg – each fork utilise tool-less preload adjusters. For 2020, WP has revised the internals with a new mid-valve piston and setting, which feels about right for someone of an average weight of 75-80kgs. Overall, the range of TE motorcycles felt easier to ride, while turning and negotiating ruts was effortless. The TE 150i was a really enjoyable motorcycle for me and felt like a mountain bike on steroids – it’s so light and manoeuvrable in almost any condition, whether that’s going up steep rocky ledges and negotiating going back down, it really showcased the control you feel over the motorcycle in tricky conditions. The larger displacement TE 250i and 300i felt more planted and stable in the faster choppier sections of the trail where the bike would move around more, I basically felt more in control of the motorcycle.

Motor characteristics:
Husqvarna has added the TE 150i to the fuel injected line up for 2020, which has only strengthened the fleet. I always find small-bore two-strokes to be the harder of bikes to ride in the meat of the power band, as you’re always wringing the bikes neck to produce its power. However. the new fuel injected TE1 50i seems to produce more useable power than any of the carburettor 150cc motorcycles I’ve ridden in the past. The bikes seemed to have more torque and was easier to keep in the right ‘working’ rev range and seemed easier to ride in general. Further to adding the TE 150i to the range, the TE 250i and TE 300i have had updates to the fuel injectors, power valve and piston, which has increased power, reduced fuel consumption and made power delivery much better. All three TE motorcycles share a six-speed gear box specifically set up for enduro riding. I found the TE 150i really responsive off the bottom and incredibly lively as you would expect from a 150cc two-stroke up top, and in the tighter conditions the engine worked well right off the bottom with great throttle response. The throttle response from the new generation 250i is really a positive step forward from the previous generation TP bikesI. In the past I have been more at home on the 300cc two-strokes over the 250, but this bike was freely revving, and depending on which map, it changed the characteristic of the motor significantly. The aggressive map really made the bike come alive and fun to ride especially in the tighter trails, but switching to the more mellow map the bike was much smoother on the power delivery and really made the bike easier to ride and offered a more consistent feel on the different terrains and surfaces. The main improvement for the TE 300i again was the throttle response and the way the power was delivered over the previous generation model. The throttle felt more connected to the rear wheel, which made the bike easier to ride. There is no mistaking the TE 300i has plenty of power, and lugging the bike through corners while using the torque of the motor is essential – the new mapping adds to the ease of the ride. I found riding in the mellower of the two maps made it easier to be more consistent and faster.

Final thoughts:
I feel I have a new appreciation of the smaller displacement two-stroke, as the TE 150i was a lot of fun with a motor that didn’t feel like a light switch and has an adequate amount of useable power. The TE 250i for me is the pick of the group – it was really fun with a snappy power delivery that can be adjusted with the mapping switch. The general handling of the 2020 TE range was impressive, which made it easier to ride faster and have more confidence in the trickier conditions. As always the quality components that come standard on the Husqvarna are always a stand out.

With ELKA at level 3