ATV Quad Magazine
Home News If one goes on a journey … 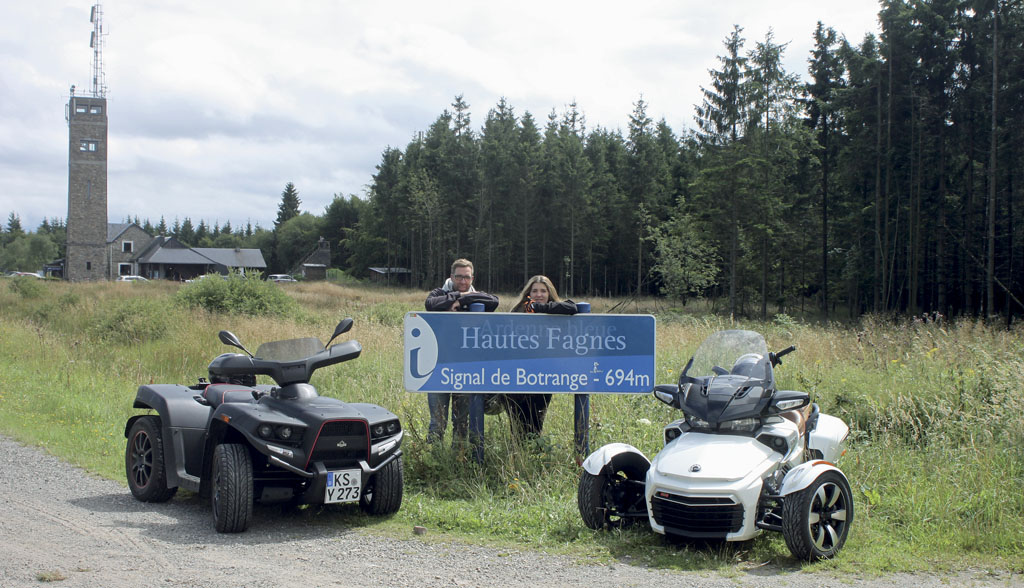 … that’s how he can tell something, is the quote from poet Matthias Claudius, which can be so wonderfully modified here for a play on words. But if you go to the High Fens in eastern Belgium, you really have something to tell afterwards. Like the region itself with its moving history.

Let’s go: Narrow streets shape the approach to the Venn.

During the lifetime of the poet Claudius (1740 – 1815), traveling was often a single adventure because it was much more arduous than it is today. Due to the lack of or inadequate infrastructure and uncomfortable means of transport, travel was largely avoided or it was reserved for wealthy people. Today we sometimes just leave for fun and a distance of around 200 kilometers is a fun day trip. Reasons that tempt us to take a beautiful quad tour. Plus a great landscape, interesting places and variety.

Steeped in history: traces of both world wars can be found in many places.

Such a tour can be undertaken from the Eifel to eastern Belgium and back. On our day trip we find many opportunities for cruising and cornering, but also for relaxing and discovering interesting things. We want to do that and meet in Düren at the bathing lake. The medium-sized town is located on the northern edge of the Eifel and thus offers the ideal starting point. In warm temperatures you can cool off in the swimming lake before or after the tour. A point on the program that family members who have traveled with might especially like, but there is plenty more of that along the way. Right from the start, it is winding in the direction of Stolberg, which is already in the Aachen district and thus in the Eifel. The partly listed districts of Schevenhütte and Breinig are worth seeing and provide our connection to Roetgen, directly on the Belgian border. Quickly nibbled on a few of the famous Belgian chocolates, which you can buy in the fresh market immediately after moving to the neighboring country.

Away from traffic: Here you have the street to yourself and you can spread out for the photo.

The Vennstrasse winds through the forest to Eupen, where you can take your first rest on the market square. Although German-speaking, the town has a lot of Walloon-French flair. All bars, cafes and restaurants invite you to take a seat outside. We leave the place in the direction of the Weser valley, not to be confused with our Weser. After crossing the language border, the 70-kilometer-long river is called “La Vesdre”, on the banks of which the road meanders, past or through beautiful villages and hiking areas towards Jalhay, to the La Gileppe reservoir, one of the highlights of our tour. You can look out over the breathtaking landscape of the Ardennes from the observation tower with restaurant or you can let the kids test their skills in the climbing forest. The original dam was once Europe’s tallest concrete dam. The 13.5 meter high sandstone lion, which consists of 180 blocks and weighs 300 tons, is imposing. It stands on the top of the dam and faces north-east, towards the then district town of Eupen and thus towards the former Prussian border, which was only five kilometers away when it was built in 1867.

Eupen: Center of the German-speaking community with Walloon flair.

Every stop is a highlight: The Venn moves with history (s).

The reservoir: the crown is accessible.

A reference to the eventful history of the area, the residents of which often involuntarily belonged to Prussia or the German Empire, sometimes to France, Holland or Belgium. Everywhere on the way we discover traces of both world wars, which particularly raged here. The fact that it has always been a border area is also due to two gems that could remind us of the travel times of our poet Claudius. We reach Barraque Michel, once a rest house which should make the arduous journey through the inhospitable area easier. Only a few kilometers away is a house with Mont Rigi, which should serve the same purpose and serve as a customs house, only on the Prussian side. Today, both are great excursion destinations for hiking through the High Fens, which begins here, or as an invitation to lunch. With the Signal de Botrange we reach the highest point in Belgium. 694 meters might not sound like much for alpinists. Here on the plateau, however, such capricious weather conditions are possible as in the mountains. Even in summer you can sometimes use a jacket. About one kilometer south below the Botrange is the nature park center of the same name with changing exhibitions on regional and nature topics as well as a permanent exhibition.

The lion has us in view: From what was once the tallest concrete dam.

Ardennes bleu – blue Ardennes – is the name given to this part of the landscape because it was once shaped and shaped by water and its course or its physical states, ice or snow. As a raised bog, the High Fens is very humid. It belongs to the Hohes Venn-Eifel nature park and is located on the one hand in the Walloon region in East Belgium, partly on the territory of French-speaking communities and the German-speaking community, on the other hand in North Rhine-Westphalia, which we will reach near Monschau. On the way there we marveled at the 60 meter deep waterfall not far from Reinhardstein Castle, a detour that is worthwhile. Like the Lac de Robertville, not far from the village of the same name. In Sourbrodt we stop at the station of the former Vennbahn line and treat ourselves to a ride on the draisine. For many decades the tracks connected the industrial cities of the region, today we roll with muscle power. The rest of the route once led to Luxembourg, which is still possible by bike since the conversion to a cycle path.

Finally, another highlight: the Rursee

Back in Germany: View of the Rursee.

The stage destination Monschau invites you to linger. Half-timbered houses in the old town and the famous mustard mill almost force us to stop before we plunge into the curves towards Rursee. A real Eldorado, which our colleagues on two wheels also know and appreciate. In good weather, you can expect corresponding traffic. The views that the narrow streets with their viewpoints offer are priceless. This does not apply to the last break in the Biker Ranch in Simmerath. The prices for a hearty meal are really moderate here. Our service is friendly and the numerous bikers represented immediately contact us to talk about petrol in the friendly atmosphere. From there we let it roll comfortably back to Düren through the Hürtgen Forest. Around 200 kilometers are on the clock, but because of the narrow streets and the decelerated atmosphere, it can be set up as a day tour, but also for a little round after work is done.

Both: The tour is suitable for a day trip, without stops, but also as an extended after-work tour.

Off the route: Reinhardstein Castle and right next to it the most powerful waterfall in Belgium.

Quaint: We come across the old route of the Vennbahn again and again. This time about us.

The High Fens: This is the highest point in Belgium.

Each as he likes. Incidentally, the tour offered here can be easily completed with a lap through the Eifel associate. We are expanding this Ardennes story to include an off-road hike in issue 2-2022. But even if you do this trip, you can tell something. So take your quad bike and helmet and choose to travel. But before the good Claudius turns around in his grave because of the warping of his verses, it is better to set off again towards East Belgium. Because there is more to discover in the High Fens than can be packed into a tour.