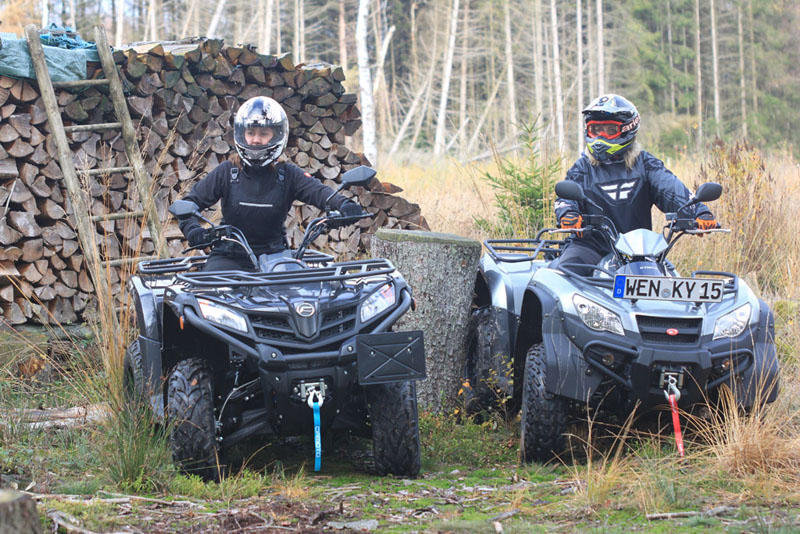 Once the vehicles with a displacement of 450 cc were the middle class. Today they are often taken as beginners, as they usually already have everything that makes a full-blown ATV. This applies to KYMCO’s MXU as well as to the Cforce from CFMOTO. Let’s go for an exchange of blows.

Head to head: The obligatory exchange of blows takes place at eye level between the two manufacturers.

Wrong world. Apparently, until a few years ago, the competition between manufacturers was all about the power and displacement crown. Almost every brand has at least one model with 700 or more cubic centimeters in its range. That went very quickly and in quick succession. A thousand followed the next. Nowadays the trend is reversed. One could almost think that there are no lower limits. Changed registration regulations forced a rethink and so engines and models with around half a liter displacement are currently back in fashion. In the meantime, the robust and mature ATVs are vying for new customers as well as the women in the scene. In addition, they are traditionally equipped with everything you need for fun, work and everyday life.

Tug-of-war between beginners: The two competitors offer a lot of ATV virtues and equipment for the money.

When the 700s marked the end of the flagpole, the 450s were considered middle class and were heavily advertised as such. In this new upscale entry-level class, the comparison between the MXU from KYMCO from Taiwan and the Chinese CFMOTO CForce is obvious. At the beginning of last year, the former already excelled in competition with the other premium brands, Can-Am and Yamaha, on the occasion of our comparison at the time. Today the classically positioned vehicle of the brand new 450 series from the Middle Kingdom is presented, which wants to collect points and buyers with a competitive price and top equipment.

Strange parallels emerge. KYMCO once competed with a modest 150s, but soon set itself apart from other Taiwanese. Today, the model range extends from 50s children’s quads to the 700 MXU with the latest engine technology. The next update is in the starting blocks. The quality also speaks for the fact that KYMCO already acted as an engine manufacturer for BMW and developed identical models together with Kawasaki and Arctic Cat. CFMOTO started a few years ago with vehicles like the lead-heavy Atlas 500 and reached its customers mainly through the low price. But several brands discovered the potential and later re-labeled CFMOTO ATVs accordingly. Until the day when the bosses of the manufacturer decided to only promote their own brand from now on, which was a great success. Robust and high-quality vehicles are at the forefront today. And here, too, there is a collaboration with the European motorcycle manufacturer KTM.

As I said, both manufacturers are targeting beginners with their 450s. To do this, you knock on the plaster properly. KYMCO puts it this way: “Thanks to electronic injection, switchable front-wheel drive and many more extras, even ATV beginners quickly lose their awe when working on difficult-to-access terrain. This is certainly also due to the cable winch that can be controlled from the handlebars, which proves to be an ingenious helper not only in stuck situations. ”CFMOTO counters that“ the compact, manoeuvrable entry-level model is immediately recognizable as a real CFMOTO ATV. As with its ‘big sisters’, the beefy ram protection is cleverly integrated into the front. The CForce 450 is available with both a short and a long wheelbase and is approved as a two-seater in both versions. “

Rear views: The chassis does not hold any surprises, the differential in the rear is an investment in the future.

Something fits in there: Cool idea for a storage compartment, which we miss in the competitor.

Clear announcement: the large display of the CFMOTO speedometer.

Everything in place: The CForce is controlled with the left

May it be something more? Operation for all-wheel drive and both differential locks.

What both ATVs have in common is the engine’s electronic injection. Likewise, the straightforward appearance. No frills, but a lot of equipment. KYMCO offers its customers 43ccm more displacement, while CFMOTO pimps its performance a bit and has “only” installed a 400. With an output of 29.9 PS (MXU) and 31 PS (CForce), the two are not very far apart. A cable winch should help you if the electronically switchable all-wheel drive or the reduction can no longer do that. The Chinese has a differential lock both at the front and at the rear and thus complies with the latest approval regulations. The KYMCO – approved as LoF – is 25 kilograms lighter than its competitor, which weighs an impressive 345 kilograms. It has to do without a lock, but spoils you in terms of chassis, rims and tires with a higher quality than the CFMOTO.

Information in the smallest of spaces: the tacho looks narrow, but has all the values ​​ready.

Quiet and solid: the stabilized chassis in the KYMCO rear is quite well coordinated.

The switch for the winch is due to the facelift.

4 × 4 at the push of a button: familiar technology, without differential lock.

The chassis from Taiwan looks tighter overall and is a lot of fun even when cornering quickly and drifting with rear-wheel drive. The tendency to tip over is less than that of the CFMOTO. The KYMCO looks agile off-road and is easy to control even in narrow passages. Downhill, the performance of the “engine brake” is fully convincing and does not show any weaknesses. The Chinese is a bit softer in terms of chassis technology and conveys more mobility in trail and trial mode, which is also due to better freedom of movement. It feels like the CFMOTOR goes to work a little more briskly. It turns higher, but lags a little behind the KYMCO’s top speed. It’s just faster. Even when it comes to pulling through, the MXU is slightly ahead in this comparison. As far as braking is concerned, the two opponents do nothing. Both manage that the driver comes to a standstill in any situation.

The modular principle gives both models some components from their big brothers. In this way, they each fit completely into the line of their manufacturer. Let’s look at the details. The KYMCO offers more ground clearance, coupled with more payload capacity. So if you want to work with the ATV, it would be more recommendable. The savvy among customers can keep 1,500 euros in their wallet if they choose the more leisure-oriented CFMOTO. Their design is also a bit sportier.

For Lena and Lea, the price also plays a big role, as both of them in their early twenties do not have the budget to buy a 1000 Outlander or Sportsman, for example. Together with the two of them, we once again sat two young women on the benches of our test vehicles and asked for their statements. Lea judges the driving pleasure on both models to be very high and “actually doesn’t miss anything that a larger ATV would offer me more. In everyday life you just have to live with scratching the 90km / h mark. ”Lena works as a two-wheel mechanic and says that the CFMOTO is a bit more user-friendly. “For example, I have better access to the assemblies for care and maintenance.”

A matter of attitude: The CFMOTO is a little more fun in trial passages.

A bit of everything: work, sport and play – the two 450s can do a lot and are fully-fledged ATVs. Fun on four wheels doesn’t have to cost a lot, as the two vehicles prove. Also that it doesn’t take more than 450 cc to cover most facets of the subject. Our duo covers – each vehicle in its own way – a broad spectrum and sets its own priorities. The two are guaranteed to be suitable for beginners as well as for price-conscious, advanced users and users. Let’s go into the world of ATVs. There are two starting aids here.

Outdoor: You can venture a long way on the tour with an MXU.