ATV Quad Magazine
Home News From the beach to the mountains 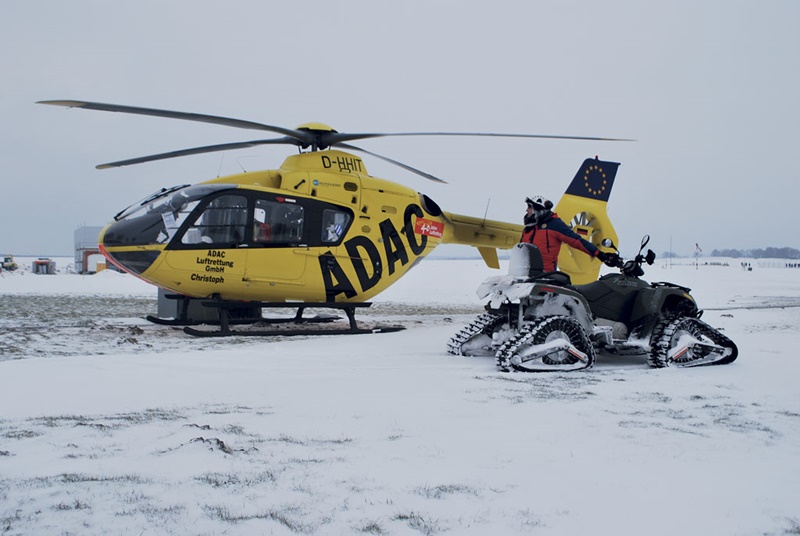 ATVs and side-by-sides have earned a good reputation in rescue operations. The possible uses are as diverse as the vehicles themselves. We spoke to helpers.

With their side-by-sides from Polaris, Kymco and Kawasaki, the helpers of the DLRG in Haffkrug-Scharbeutz on the Baltic Sea can complete their exercises and assignments significantly faster. First and foremost, this is very reassuring for the numerous bathing and holiday guests who visit the coastal town all year round, but especially in summer. Even off-road vehicles of the Land Rover type are hardly able to plow through the soft sandy beach as quickly as the versatile jack-of-all-trades in the vehicle industry. The head of the local rescue service, Peter Franz, reports that work has been made considerably easier: “In an emergency, we are on the spot faster and have the necessary equipment on board. Especially the watering – “slipping” – the lifeboats is quick and easy. ”Valuable seconds when it matters. His people regularly patrol the large stretch of beach. They rush to help not only people in distress at sea. “We also use our UTVs in the tracing service,” reports Franz. Often more people get lost in the vast landscape than you might think. Elderly people in particular get into trouble if, for example, they are lost or have overestimated themselves. The rescuers from Scharbeutz even have a drone on board one of their side-by-sides to search for people.

There are hiking areas everywhere

“Last year we expanded our range of operations to include a further concept: the” Terrain rescue / transport system in the field “consists of a task force with two paramedics and an ATV”, reports Jörn Baye from the German Red Cross in Kalefeld. The helpers of the “DRK Readiness Altes Amt” look after motocross races and hiking days as well as carnival parades. Similar to her northern German colleagues from the DLRG, the search for missing persons in difficult terrain also presents challenges. “The all-terrain unit consists of a Unimog as a supply vehicle and an all-terrain KTW (ambulance vehicle) based on a VW bus. They move material to places that are difficult to access and ultimately ensure a patient-friendly rescue. Unfortunately, both vehicles are unsuitable for the small hiking trails. But for the large ambulance vehicles with box bodies it is already over in many places ”, reports Jörn. The ATV is supposed to close the gap here – from a simple forest path to a narrow hiking trail or even cross-country into the forest, in order to be able to bring the emergency doctor and urgently needed material to the patient as quickly and as close as possible.

The rescue guards in the Aachen and Düren districts have also had these options for a few years now. The two cities each share areas of the Eifel, some of which are climbing rocks. There are moors in the direction of the Belgian border, in the Düren area there is open-cast lignite mining. Paramedic Dirk Wilke remembers a winter: “Snow chaos. Nothing works anymore. There are people who go out anyway, for example with the dog – ‘he has to’. Freezing cold, snow flurries, icy wind. An emergency often occurs very quickly and unexpectedly. ”For these cases and for moving on the sometimes very soft ground, two Arctic Cats are in use, which have been equipped with caterpillar chains by the dealer BigAirMax.

Retrofitting as an emergency vehicle – the dealers have a solution

The dealers in the area are happy to provide their rescue services with advice and assistance. If the cat does it in the Eifel without further modifications, the mountain rescue service in the Black Forest, for example, made more demands on the Black Forest Quad team. A platform with tubular frame for various tasks was mounted on the Can-Am Outlander 6 × 6. On the one hand, this serves to accommodate a seat for the emergency doctor, but also as a holding point for various carrying systems. A foldable bracket accommodates the signal system, including blue light and siren. The dealer achieved a road approval as a special vehicle mountain rescue service in a single purchase.

Jörn Bayes rescuers opted for a CFMOTO 520 because at the time of purchase it was one of the few vehicles on the market that already complied with the new EU directives. “We want to be legally on the safe side within the framework of the aid organizations.” The 520 was interesting in terms of price, especially because a dealer with a workshop is on site. “We were also won over by the size, the comfortable seating position for two, but also the sufficient load. Nevertheless, it is manoeuvrable enough for narrow forest paths, ”reports Jörn from practice.

The mountains present us with special challenges

The assignments in the mountains sometimes go to extremes. In an emergency, mountain rescue needs a vehicle they can rely on. Because it has to get to the casualty quickly and reliably through remote areas, rescue him in any situation and transport him to a safe place or to the nearest hospital. In the Alpine regions, for example, this is more time-consuming than elsewhere. That is why the rescue workers have very special requirements for a vehicle – both in terms of off-road suitability, robustness and safety as well as the transport options for the injured and storage space for the extensive equipment. The Polaris dealer Vonblon Maschinen GmbH is the first point of contact for Austrian mountain rescue services.

“We have been working closely with mountain rescue since 2004 and regularly develop new vehicles for them that we convert according to their requirements,” says Gerold Vonblon, the managing director. “We use the ATVs and off-road vehicles from Polaris as a basis.” For the procurement services of the rescue organizations, this has the advantage that the right products can be selected and ordered in advance from the extensive accessories catalog. In addition, custom-made products can be produced on request. Vonblon, for example, in coordination with the Austrian government, developed a track system that is also approved for the road. The Polaris RANGER are equipped with a special rescue platform on the flatbed so that casualties can be safely transported down the mountain. With their special vehicles, the rescue workers can even reach impassable mountain peaks, the tailor-made ATVs can even transport two to three people. Significantly more effective than conventional systems for patient transport.

“For us, ATVs are the ultimate in all requirements,” says Herbert Figl, vehicle officer for the Tyrolean mountain rescue service. “By assembling caterpillar kits, they enable us to drive on any surface – whether snow, mud or asphalt. We even make progress on ice with the available spikes. This allows us to use a vehicle for a wide variety of areas, which makes our work much easier and cheaper. This way, the patient doesn’t have to be moved from one vehicle to another. ”He also refers to the comparatively enormous trailer load.

We also appreciated it in Bayes Kreisverband Osterode am Harz. There are two other organizations there that operate the terrain rescue and are supported by CFMOTO. One of the units has a converted Land Rover Defender and the other – the QSMT (Quad Supported Medical Team eV) – comes to the rescue with three ATVs. For major incidents, events and long-term missions, they have a mobile intermediate care unit that offers extensive diagnostics and space for (partially) intensive care therapy. This module is loaded on a trailer and can therefore be used almost anywhere.

Back to the beach

The lifeguards have now loaded completely different equipment. The lifeboats that serve as swimming aids when the volunteers have to swim far out are lashed to the roof of their side-by-sides. “Wearing them takes strength that is better used during strenuous swimming,” summarizes Peter Franz. Without the all-terrain helpers, hardly anything would be possible on the 20-kilometer section anyway. “It’s good that we have the vehicles!” An opinion that many of his colleagues in many other organizations will share.