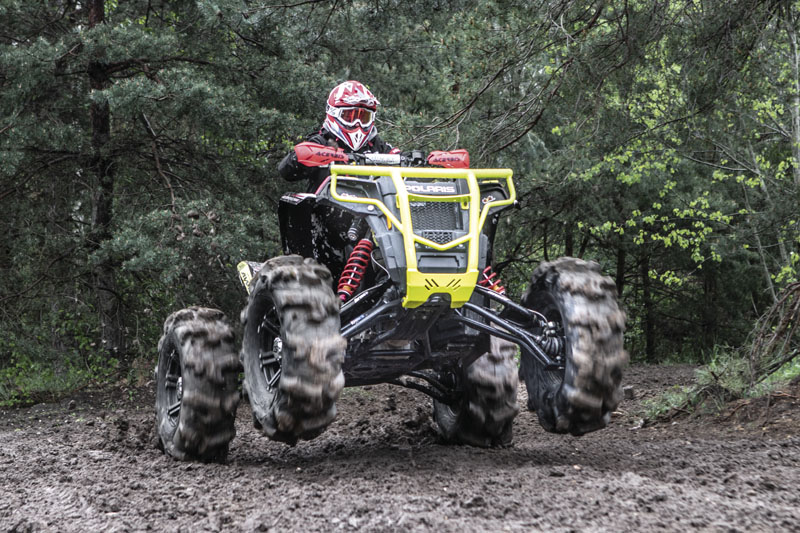 RMX Racing puts the Scrambler higher. We were on the road with it and show you what the lifted ATV can do.

Gigantic. Just huge. And high. That’s how the Scrambler stands. RMX gives the already properly equipped vehicle an extensive change and shows what the Scrambler is all about.

Freedom: There is a lot of space under the belly. As a result, the scrambler is rarely stopped by ground contact.

components from the USA

“We’ve put together a complete highlifter package!” says Andreas Rosenlocher from RMX Racing. And when you stand in front of the vehicle, you know what the likeable Saxony-Anhalter means. Pretty much everything seems somehow bigger, wider and more crass. The Maxxis tires are so big that you inevitably think: does it come off the production line? There is, because RMX uses components from the USA that have been extensively tested and tried out in the mud bogger scene there. They proved that they can withstand the demands of the drivers and not give up the ghost prematurely. Of course, signs of wear are more to be expected with the leverage effects that occur than with the standard built-in parts. However, this circumstance is compensated for by the good quality of the built-in components.

Huge: The side profile shows an extremely high vehicle that impresses with its powerful tires.

Get rid of it: The headlights are not there because it is a real racing machine.

Crazy: The fat Maxxis tires not only increase the ground clearance, but also the available grip.

Addition: The new shock absorbers are significantly larger due to the modified A-arms.

Series: The brake system was not changed, as the effect is already very good ex works.

Clear: The speed can be read very clearly from the speedometer. Even in the rain.

Classic: The operation of the Scrambler is very clear and clearly regulated, as is typical for Polaris.

The conversion kit, which is available for almost 6,000 euros, not only consists of larger tires, but also includes significantly longer drive shafts. Because the A-arms are larger and also more stable than the original parts supplied by Polaris. This widens the track of the vehicle gigantic. The converted Scrambler is as massive as probably rarely seen in the field. Really intense and impressive. Due to the extreme length of these components, there was also a need for changes to the dampers. These are also exchanged for new ones by RMX. This makes the competition vehicle suitable for the most violent and extreme terrain. Of course, the rims also had to be hand-crafted. They come from ITP and are designed in the dimensions 14×6 at the front and 14×8 at the rear. The 32×10-14 tires from MAXXIS will also fit on it.

Burrowing: I feel very comfortable with the Scrambler in the deep pubic area, as it goes through almost everything.

The Highlifter should feel comfortable in mud and water. However, the standard bushings and other chassis parts are not designed for this over the long term. That’s why RMX relies on the complete Jay Parts Kit and, in addition to the bushings, also exchanges the ball heads and wheel mounts for parts from Jay Parts. This is to further improve durability and avoid failures or problems. Nothing would be worse than the extensively modified vehicle breaking down due to small things and having to be towed to the workshop. At RMX, they obviously attach great importance to well thought-out concepts and don’t just leave it at the basic idea: “Let’s make it higher and wider.” Anything that is additionally necessary for the intended purpose is simply converted. That’s how it should be.

Shovels: The tires are equipped with real shovels. It goes through the mud with crazy grip.

Anyone who takes a seat on the Scrambler will notice one thing: the booth is high. And wide. This has some advantages in terms of width. You don’t tip over so quickly and you can safely drive on much steeper inclines. However, narrow sections of the route can be tricky. Because where it gets tight, the Scrambler just doesn’t fit through. But we see the advantages as successful. Due to the high ground clearance, deep water crossings are possible. There is significantly more space than with the series scramblers. In terms of performance, everything stayed the same. That’s a good thing, because the Scrambler has enough power for this extreme conversion. Thanks to the new tires, there is also enough traction. It really gets down to business and almost nothing can stop him. When people like Andreas Rosenlocher drive a vehicle like the converted Scrambler, you might think that the laws of nature have been suspended. Then a scrambler seems to simply swim through a deep water hole – although it is still in contact with the bottom. We loved it.

Into the race according to regulations

The GCC is back

Something’s going on in the east