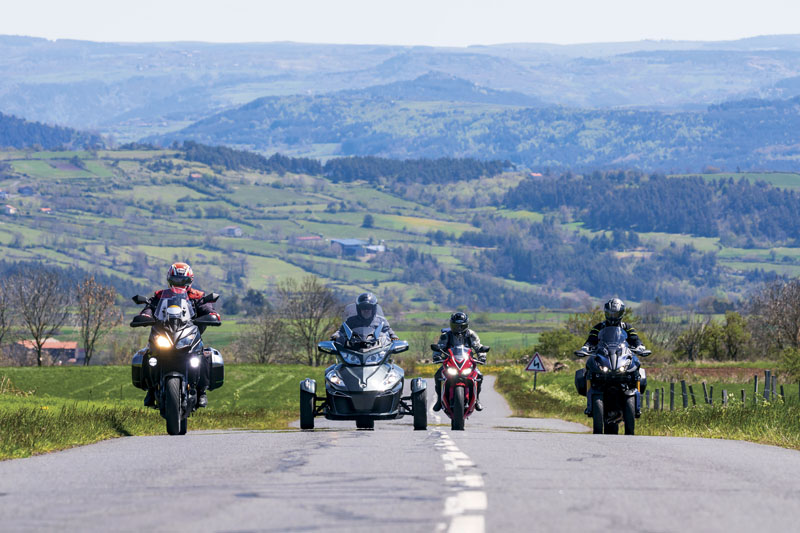 This is vacation! No long-distance train station, no motorway connection, no airport: the Ardèche in southern France has slowed down quite a bit. The department of Haute-Loire – right next door – is also far away from the hustle and bustle. Exactly the right area for contemplative tours in a magnificent landscape.

Honey: Alain Froment shows some of his bikes.

Cora Stephan’s eyes light up when she talks about her adopted home – the village of Laurac-en-Vivarais and its surroundings. And our eyes light up too, at the prospect of the upcoming tours there. The successful writer knows the area and lets her detective novels take place exactly where the south of France is most beautiful: In the Vivarais, as the Ardèche department and the adjacent areas of the Haute-Loire are called by the locals. “In deep gorges” is the name of one of her exciting books, which between the lines even turns out to be a travel guide. Cora aptly describes the characters and peculiarities of the residents as well as the beauty of the landscape. These deep gorges are best experienced on two, three or four wheels.

Overview: There are good maps for planning excursions.

Stories and anecdotes: The region has a lot to offer.

Experience is to be taken quite literally: the narrow roads and small passes are made for us fresh air riders. Little traffic, many curves, tranquil villages and actually “always” nice weather. Sounds like an invitation. It is one too. Spoken by the locals who are happy to host travelers and show them what the region has to offer and how to live. For example, at the 17th-century Notre Dame de Cousignac winery, the place where Cora couldn’t stop raving. Rachel and Raphaël Pommier spoil their guests with rustic rooms, good wine and great food. A theme that runs like a red thread through every stay in the two departments. This is also the case in the gites mentioned, simple but clean, always family-run accommodation. Often in private houses or integrated into a farm, you live and eat in a way that is typical of the country and inexpensive together with the innkeepers. A very good opportunity for our group on their foray into the countryside.

This foray is more than a tour of winding serpentines and remote country roads. We recommend the streets marked with “D” and a number in the respective department. They are guaranteed to take you across country and into the most remote corners. Travel time in the Ardèche and Haute-Loire is from spring to late autumn. There is always a light breeze blowing against us, while the summers can get hot. In every season, however, the landscape shines in great colors, smells change around every corner. The scent of thyme and lavender fills our nostrils. In the middle of the supposed solitude there are natural spectacles such as grottos, gorges and caves, which were inhabited by our Stone Age ancestors in primeval times. Old towns are just as isolated. Such as Balazuc, picturesquely situated on the top of a steep rocky slope overlooking the Ardèche river. For this reason alone, the village is classified as one of the plus beaux villages de France – the most beautiful in France. Former mule stations are on the route, where people and animals rested in the Middle Ages. Often used today as a rustic gastronomy.

Heavenly: tours in a magnificent landscape.

Fantastic views: It’s worth stopping at almost every bend.

History is omnipresent in our travel area. This is particularly evident in Le Puy-en-Velay. The capital of the Haute-Loire has an old town worth seeing. From here countless pilgrims start out of the cathedral every day on the Way of St. James to Santiago de Compostela. The eventful history can be experienced around every corner, but also stories. An elderly lady named Christine talks about bobbin lace, the old handicraft technique for making lace. Her eyes shine like Cora’s a few days before. Stories can be found in the garage of Alain Froment, who hoards old motorcycles at his olive oil mill in Les Vans. Models that would do any technology museum credit. All functional! Or in Xavier Clairget’s brewery. With his wife, he brews a local beer with Ardèche water. The taproom alone is worth a stop. But it should be the last of the day, because you probably won’t leave the dining room fit to drive.

Off-road drivers can also be found. Countless gravel and forest paths run through the area. They are legally navigable if you are willing to follow a few simple rules. The easiest is to book a guide. With this you can find the best gravel passes and root carpets without getting lost in the wilderness. The French see such driving calmly. They obviously know that even the roughest ATV tire can’t harm a cart path blocked with stones. But we stay on the road and experience many adventures there too.

That fits: The Ardèche and Haute-Loire departments offer a lot of variety for touring bikers of all kinds.

Spectacular views, old bridges and narrow pass roads. The change between the two departments can usually only be understood by the signs. The landscape and cultural area with its foothills of the Cevennes is the same for both. Whereby every touring rider will soon appreciate the rich variety. Sometimes the surroundings are barren and rocky, then lush green again and the streets follow a river.

Color game: This is southern France

At the end of an eventful week we meet again at Raphaël’s winery. The group of motorcycle, quad and Spyder riders harmonized very well, as the route meant that we were all limited to a moderate pace. With a good wine and delicious food, we talk about the Vivarais. With shining eyes!

Jay Parts: Side and Quadcross of Nations – Quadjournal