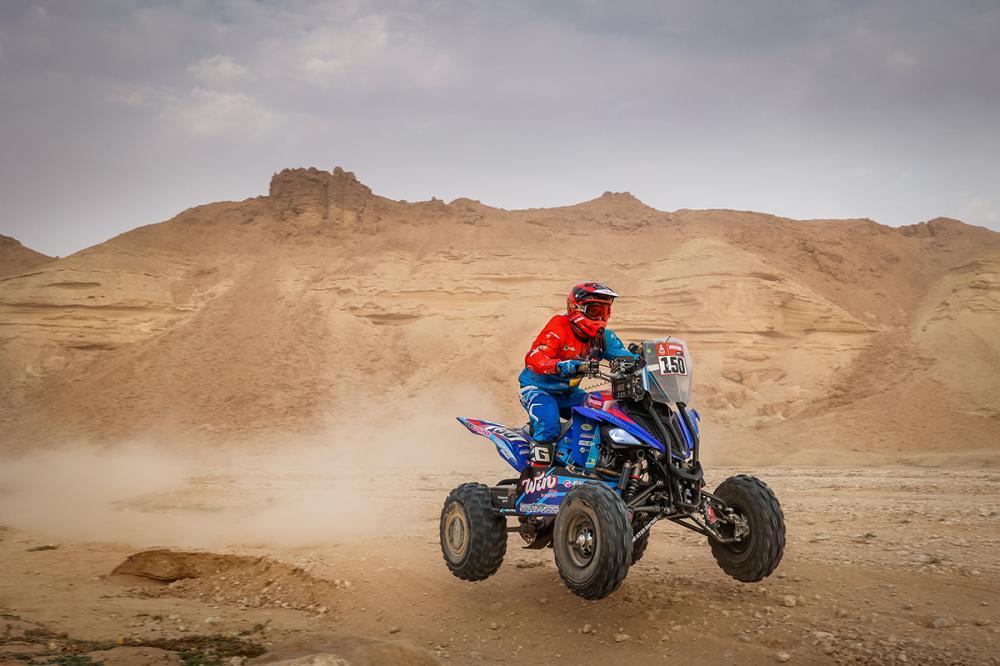 After the 5th stage, Nicolás Cavigliasso is currently leading the quad class on a Yamaha YFM700. The 2019 winner has big plans for this year, as he says in an interview.

Nicolás Cavigliasso is a 29 year old driver who was born in Cabrerain, in the province of Cordoba, Argentina, where his family owns a peanut processing company. He made his racing debut in 2016 in the quad-cross and 4X2 quad categories in Argentina. His first international rally triumph came just a year later with a win at the Merzouga Rally and the Baja Inka as well as winning the CaNav championship. In 2018 he made his Dakar debut and his finish caused quite a stir. In a competition dominated by Ignacio Casale, Nico won three stages and, in addition to being the best rookie, came second in the overall standings. The 2019 Dakar in Peru was unforgettable for Cavigliasso for several reasons. His dominance was absolute when he won nine of the ten stages. A title that he celebrated with Jeremías González Ferioli (2nd) and Gustavo Gallego (3rd) at the top of a purely Argentine podium as the winner. He also surprised his girlfriend Valentina when he asked her to marry him on the finish podium in Lima. In the first Saudi edition, he used the year 2020 to establish himself in the SARR series and to train as much as possible under the restrictions. Nico rides the Drag’on Rally Team’s Yamaha YFM 700 and is coming back to the Dakar to win the crown back.

NC: “In that darn 2020 year I couldn’t take part in the Dakar. The only competition I took part in was the “SARR”. I won my category. Then the restrictions came and I was fortunate enough to be able to train on a cross-country track with strict protocols. Since October I have finally been able to train in the mountains or in the fields in order to achieve a good rhythm. But the lack of competition in rallies is still noticeable. For 2021 I am riding the brand new Yamaha YFM 700 Quad that the Nic Pro team prepared and that we received at the beginning of November. The Drag’on Rally Team will again be responsible for race support. My wife Valentina and my mechanic Nicolás complete my on-site team.

I think Dakar 21 will be a different race. I watched the videos of the stages and spoke to Sebastián (Urquía) and Nelson (Sanabria Galeano), who were able to give me their impressions of the different types of terrain. My goal? I will fight the best and I regret that Ignacio Casale is not in this category because it would have been an interesting duel. I’m racing for victory; I will get my crown back ”.

The beginning of a new era: Polaris announces the newly developed RANGER with electric...

Track plates for the Z-Force