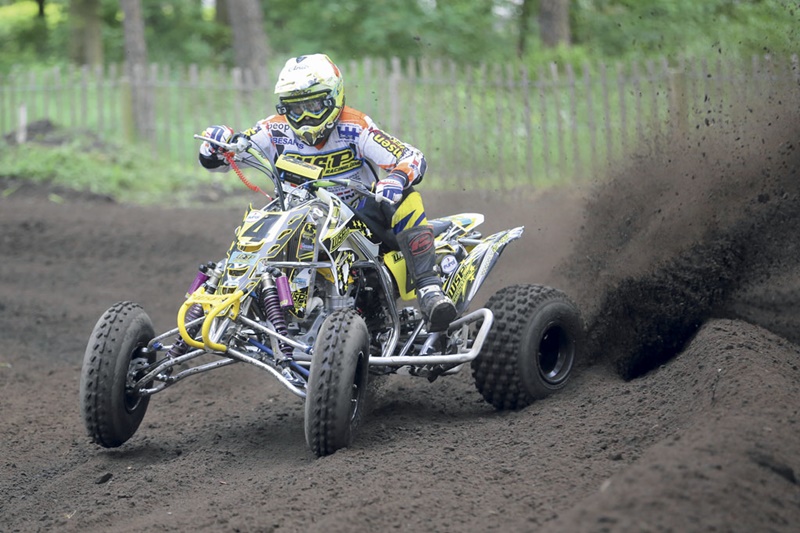 Ride a quad bike? Then you have two options: upgrade your production quad or have one made to measure for you. That both variants come out for about the same price, It’s amazing.

For the sports and competition riders among us, the mobile pedestal is a piece of sports equipment, like the racket for the tennis player and the bicycle for a mountain biker. The best example of this is given by motocrossers who transport their motorcycles and quads on trailers and only use them for training and competitions. And there are quite a few of them. The boys and girls often have to use series quads – regularly those from Japanese manufacturers. Certainly still usable in the beginning, but soon reach their limits with increasing experience of the pilot. The aftermarket offers everything from wide axles, chassis and engine tuning to turn a sports quad into an individual racing machine. That goes into the money. In addition, most manufacturers withdrew their sports models from the market. How nice would it be if you could drive a quad that was designed or adapted for its owner from the start? Too expensive? Not at all! From the Netherlands, of all places, we receive outstanding sport quads that inspire every connoisseur. Our neighbors have always been enthusiastic about motocross. The Oranjes have made a name for themselves particularly in the custom construction of chassis and suspension systems. Above all, the top European crossers in the quad area rarely use well-known quads.

WSP, the quad from the world champion

Daniël Willemsen has almost subscribed to the Dutch and World Championship titles in the sidecar cross scene. He has already been able to paint this ten times with different co-drivers. He is currently on the road with Peter Beunk in his own chassis, the WSP – Willemsen Special Parts. In 2014 Daniël and his team decided to build a first prototype of the WSP quad. “One of the reasons for this was that the big manufacturers no longer manufacture or supply sports quads,” says Daniël. He and his technicians Igor and Frits invested a lot of time and energy in the project for which they had set themselves ambitious goals. So it shouldn’t just be a quad to have fun, but the end product should be capable of winning. The chassis is able to accommodate powerful motors and offers excellent handling with the lowest possible weight. The latter had the highest priority and cost a lot of time and money to develop. But ultimately WSP is able to manufacture everything necessary for the quad in-house. Engines and chassis technology are supplied. A great advantage for customers is that they can still decide what they want at WSP. So he can buy a kit or a finished machine. The kit can best be described as a “rolling chassis”. This means that the customer still has to provide the drive. There is also room for tuning when the performance curve increases. WSP drivers can adapt their vehicle further and further, as it pleases, fits or the wallet allows.

The racing service from WSP is quite unique. The technicians travel to all important events in their truck. It’s full of parts and accessories. It is possible to weld both steel and aluminum on site. That is service at a high level and for the drivers it is nice to know that even a broken chassis does not mean the end of the race. Although such a breakdown is unlikely given the quality. Incidentally, the plastic parts, tank, air filter box and cooler come from the company’s teams and are quickly available from the shop. The engines of motocross and enduro bikes are welcome drive units for many custom manufacturers. According to the motto “one fits all”, the frames of the specialists can accommodate almost any engine on the market. So does WSP. Regardless of whether it is a two-stroke or four-stroke engine, large or small displacement. Individual coordination of performance and chassis is possible.

We had the opportunity to drive the WSP racer with a Husqvarna engine. We quickly realized how much energy and brainpower the Dutch were investing in the geometry of the quad. The handling is top notch! The three designers had also delved into the steering and the so-called Ackermann principle, which a certain Rudolph Ackermann applied for a patent for carriages as early as 1817. The “Ackermann effect” occurs when the imaginary extension of the two front wheel axles intersect at a point when cornering, which is exactly on the (imaginary) extension of the rear axle. If this is the case, all wheels roll in the direction in which they are supposed to roll without pushing or other interference. WSP constructed the chassis using laser and computer technology and designed it to be fully adjustable in caster and camber. The high yet optimally usable engine power of the FC 450 engine is astonishing. With this SOHC engine, the quad develops around 63 hp and offers incredible handling thanks to the lightweight, ultra-modern chassis. The standard electric starter and the ignition curve switch mounted on the handlebar make it one of the most modern motocross quads on the market.

A winner, like its designer, is the WSP-Husqvarna. But we have already seen a quad with a KTM engine, which also promises the best driving performance. As seen here, the quad changes hands for 16,950 euros, although the new one was even able to determine its seating position beforehand. In view of the performance and the low weight, the outstanding handling, the word “bargain” could almost come off the lips. Because if you wanted to raise your Japanese to the level of the WSP, you would certainly have more money going on and at the same time you would have to forego many details that could add a bit in the race. So the MX-enthusiastic quad rider should go towards Hengelo to talk to Daniël about the individual possibilities. Conversely, Willemsen previously did this with European pilots and top drivers from overseas to get their opinion on what a quad should be like. After all, you know each other well from the international racing circuit. The result is the stand presented here with a Deltabox frame and unusual geometry. 80 teams and quads currently leave the WSP hall every year, and the trend is rising. 15 quads are already on the road in the Dutch championship, with “works driver” Mike van Grinsven standing out. And nobody should be surprised if the first WSPs will soon be hunting for points here too. That is certainly not just due to the vacancy of alternatives!

On the sofa through the landscape