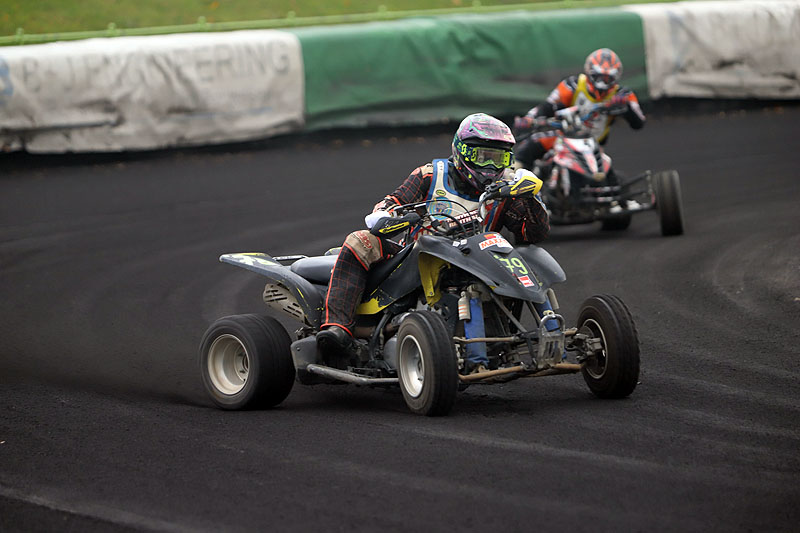 The name Güstrow alone casts a spell over every motor sports enthusiast: The Speedway Stadium is one of the top addresses in international track racing. Here the fans were looking forward to the grand finale 2020 of the MAXXIS REIFEN German DMV Shorttrack Quad Championship.

The event was approved for several hundred spectators. But exactly one day before the race on October 24th there was a corona outbreak in Güstrow and on Friday evening the measures in the Rostock district were tightened. Before the start of the race on Saturday, those responsible at MC Güstrow decided not to let in any spectators. Nobody could be reached at the competent authorities who could have given binding legal information. Nevertheless, the training started as a pure sporting event. Then, immediately before the first race, the district office received the message that spectators were allowed to enter the stadium. Although the group around chairman Torsten Jürn opened the box office in a hurry, many spectators had already been sent home, some unfortunately with a long journey. After all, a number of fans experienced a race that was more than worthy of a final.

Exciting runs and many highlights

One step ahead with the automatic quads: Mirco Zuchtig.

In the automatic class, as in the previous races, Mirko Züchtig was ahead of the game and he deservedly won the championship title ahead of the admirable Harald Böhm. Ronny Rochlitz drove again in the automatics and, on a trip inside, made the championship title in the rookies class perfect with his fourth win of the day. In class 3 there were five pilots on the starting line, among which the two guest drivers Reiko Menning and Denny Fraaß stood out. Their wheel-to-wheel duels were a feast for the eyes and mountain ring winner Denny Fraaß could only beat local hero Menning by 2 points. Much more important, however, was the duel between Ronny Rochlitz and Björn Ohlrich, because the two North Germans were fighting for the championship title. Ohlrich was third ahead of Rochlitz and won the championship with a 4 point lead. Bernd Möntmann was slowed down a bit by a retirement in race 1.

Class 4 with only four starters was no less exciting: Again there was the duel between the double starters Fraaß and Menning, but this time Ludwigsluster Fraaß was the first to cross the line four times. Newcomer Marcus Rux from MC Bergring came third; Marvin Schulze could only start in run 1. Schulze, who drives pegs for the AMCC, won the championship title. Due to illness, Joachim Römer had to end the season after the first race in Marienbad.

There was great action and high tension in the school class: Marvin’s brother Felix Schulze (Heringen) and Finn-Luca Ries (MSC Ohmtal) traveled to Güstrow at the same time. Felix won the first two runs, but then he found himself in third place behind Finn and Tavis Hinz, who was rated in the youth class. The last run of the season had to bring the decision! Ries won the start and led, all of Schulze’s attacks were unsuccessful, but Felix got past inside on the last lap, won the run, the daily standings and the championship! Tavis Hinz from MSC Neuenhasslau, who competed in the student class in every race in 2020, became champion of the youth class in his rookie season.

Brisk offspring: There was a lot of tension in the school class.

On the perfect track in Güstrow, the kart races were better than ever. Ironically, the already established master Peter Heussner had to cancel because of a previous car accident. The original field of 911s shrank to nine and there were four and five drivers. Maurice Meyer, often unlucky this season, was in a class of his own and dominated the race from start to finish. In the A final, the Osnabrücker took the lead again from the start. Markus Tork drove from the very back to second place and came second with his best result in 2020. Marco Dahms, who was spoiled for success, had to be satisfied with third place ahead of Dennis Wilke and the fifth finalist Ingo Duttine. Corinna Wennmann won the B final. With the day’s victory, Maurice Meyer secured the runner-up behind Heussner and ahead of the defending champion Ingo Duttine, who was unlucky this year.

Five great races were driven in two nations with drivers from Hungary, Poland, Austria, England and Germany under corona conditions. After the event, perfectly organized by MC Güstrow, there was a meeting with drivers and the organizational team, where the first course for 2021 had already been set. And even the first race dates and locations of the MAXXIS REIFEN German DMV Shorttrack Quad Championship 2021 have already been set! After the season is before the season!

The speed karts celebrated in Güstrow were a special highlight.

Quads of all brands …

… and cubic capacity find their place in the classes of the short track.

The facility in Güstrow is popular among rail sports fans and drivers.

Everyone else throws in the towel!

Not just for the wrist

UForce for the Hospitallers