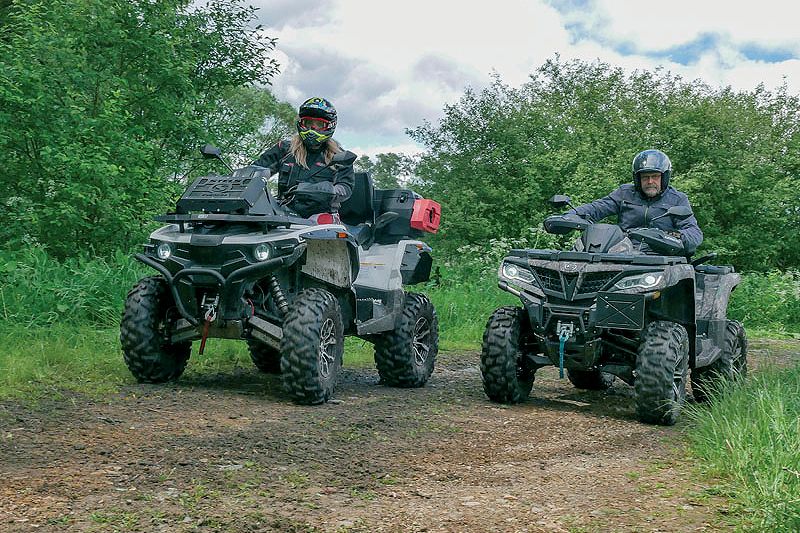 Two 850s that recently made a name for themselves. Each ATV in its own way. STELS and CFMOTO are getting ready to capture even more market shares. We compare the two vehicles.

The Russians are here! Several years ago, a master plumber as a cartoon character caused a laugh in the cinema with this sentence. Almost exactly a year ago, the same sentence caused great astonishment in the quad scene. Quadix from Bamberg has since had STELS vehicles in its range. A lot of attention and a lot of comments followed this first appearance of the Russian brand. Today, many retailers in Germany carry the brand and report good sales.

The “Everywhere Comers”: Both ATVs do not shy away from typical use.

In its early days, CFMOTO caused far less attention on the local market. Because the Atlas 500 model was not exactly one of the highlights in the portfolio at that time. Even then, other brands were supplied with engines and even complete vehicles. The decision to revise his own models and sell them under his own brand name brought about a turning point. The first 800 twin-cylinder with the name Terralander found many buyers and friends. Now renamed CForce, there is an 820, an 850 and a 1000. The latter two share the chassis and design.

The test candidates: Lots of similarities and clear differences.

Colloquially, powerful vehicles are referred to as bolides. That is definitely the case with the four-wheelers presented here. Vehicles with such a displacement represented the end of the flagpole just a few years ago. 800 to 850 cc – more was not possible. Until the thousands came. Both ATVs have a powerful V-twin cylinder. Whereby CFMOTO cheats a little with the indication “850”. The Chinese engine is in truth “only” an 800, while STELS dimensioned its displacement according to the name. Sponge about it, we both make this comparison anyway, because they compete in the same class. If they stand next to each other, the Chinese look more filigree and stylish, while the Russian version of an ATV looks much more robust. The same is higher than the competitor and comes across as heavier at first. This is certainly also due to the fact that the radiator has been relocated to the front luggage rack and the tires are wider and coarser. Our test STELS is also equipped with the matching case from Quadix, to which two of the new canister systems have been adapted. A total of ten liters of fuel can be carried comfortably and safely with it.

Full equipment for rustic cross-country rides: The Russian definition of an ATV.

Accessories from Russia: are now also available for CFMOTO. Also at Quadix.

Large flap: STELS storage compartment in front of the bench.

What they both have in common is the standard cable winch. This is part of the good form today and is class standard. Long chassis allow them to be designed as a two-seater and offer ample space for one passenger. Equipped with a backrest, platforms with toothed notches for the feet and solid handles, the second man – or woman – can travel comfortably with you. Very nicely solved. The customer gets USB sockets, storage compartments and hand guards included. Light alloy rims round off the look of the machines. With the CFMOTO, the lighting is optically better integrated and looks more modern than in the more robust STELS. An electronic steering aid, which is also on the equipment list of both vehicles, is modern. The engine’s injection system for mixture preparation also works electronically. You could almost break off the comparison at this point and let your personal taste decide. Because according to the list there is not even a price difference and the thick ships are each offered for 10,699 euros.

Good handling: You quickly feel at home on the CFMOTO.

Okay, there are still quite a few differences with all the same or similar features. They are noticeable when driving. The seating position on the Chinese is more manageable. You sit more “in” the machine than “on it”, have a better feel for the maneuvers and the handling is cheaper than that of the Russian. The driver literally sits enthroned on it and a comparatively higher and thus somewhat less favorable center of gravity is created. This is also immediately noticeable. The more tightly tuned CF chassis with adjustable gas pressure shock absorbers is more controllable than the simple, only adjustable, damping package from STELS. This swims slightly in the curves and kinks more clearly. In the terrain, however, the Russian struts swallow a lot and keep the load well on course even in rough terrain.

Although the difference in weight between the two is not serious either – the STELS weighs 435 kilograms, the CFMOTO 447 – the Chinese engine starts a little more powerfully and pulls up better from below from the lower speed range. But the hydraulic disc brakes from Russia delay better. The 850 CF also has four hydraulically operated disc brakes, but they should be a bit crisper. When it comes to grip, the STELS is also slightly ahead. The larger-sized and coarser pelts claw into every subsoil and help with the advance. Well, in fairness it has to be said that Quadix equips its flagship with MAXXIS Bighorn, one of the proven best ATV tires on the market. Chalking the CFMOTO as a defect would be grumbling at a high level. Their standard tires from Abuzz are still doing well.

What does who do with whom?

The difference in top speed is 90 (STELS) to 105 km / h (CFMOTO). That doesn’t seem like much, but it is important for one or the other customer. So we come to the purpose of the two. Drivers who prefer to drive off-road often are recommended to use the Russian definition of an ATV. The raised radiator and the mighty intake manifold clearly point in this direction. With the all-wheel drive engaged and the gear reduction, there is no situation that we would not have mastered during a typical test session. Thanks to the complete protection on the underbody, you don’t have to shy away from tough obstacles. The STELS also has a touch of mud bogging – the trend in the scene.

Allocation clear: the commitment to the private label was good for the vehicles.

Tailgate: Not quite as much goes in here as with the competitor.

For this comparison, touring riders should rather use the CFMOTO. It cuts a fine figure on the road and can keep up off-road. No matter if you are a beginner or an experienced pilot, this ATV does not make any great demands and quickly gives the impression that you have never ridden anything else. The Chinese package is better put together “all-round”, the Russian one more robust and rustic. You can enjoy the clear characteristic curve of the CF in the draft. The jagged footrests provide a good grip, they are slightly bent up and thus enable good curve control.
So in the end a question of personal taste after all? Yes, and isn’t that often the case, dear readers? It’s good that with these two real cars, there are two interesting vehicles on the market. This is exactly what our scene needs.