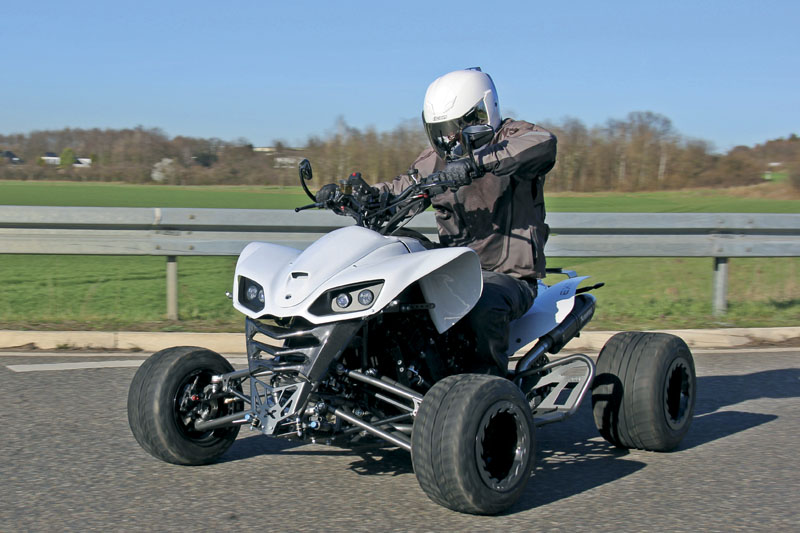 A project won’t let you go. The idea is fascinating. You want to make it easy, wait for the opportunity. And then the time has finally come: someone who understands you comes along – and off we go!

Do you know the feeling when you are convinced of something and want to implement an idea? You really get into it and you know for sure: “One day it’s time!” It must have been something similar for Sebastian Jornitz. “I’ve wanted to do this for a long time,” he says, looking at his latest creation. Namely transplanting the awesome engine of the Yamaha R1 into a quad chassis. The aim was to create a street quad that is not only fast but also safe and, as an absolute driving machine, makes the hearts of sporting fans beat faster. But he didn’t find the time for it. Because the ingenious designer not only has a lot of new ideas in his head at once, but above all the order books are full. Numerous customers want to drive an EXEET because they are simply one of the best options for the road fraction. And so a number of the well-known models based on Raptor or even some self-construction kits regularly leave the assembly hall in Euskirchen. This even had to be bigger, which recently involved a move. And then there is Sebastian’s claim to perfection: “Half measures are not really my thing!”

Jornitz had had the idea of ​​transplanting the four-cylinder Yamaha R1, which is known to be powerful and uniquely well-known, into a quad for a long time. Then why didn’t he just do it? After all, he has plenty of experience installing four- and two-cylinder motorcycle engines in a Raptor chassis. Good chassis all around – done. “It’s not that easy in this case. It’s not like we haven’t tried it yet. Because the desire of our customers and the demand for the R1 was already there.” But, the Eifel inventor goes on to explain, the R1 engine in particular draws a lot of its power from its design and construction. “The Yamaha needs its specially adapted airbox in connection with a long intake tract. If the parameters are not correct, there will be a loss of performance and poor engine operation. A Raptor frame just can’t take that.”

Finally! Finally someone came into the shop who accepted the Kawasaki KFX700 as the basis for a road racer and at the same time wanted the highest possible performance. In this way, Sebastian was able to realize the eight-year-old idea with a good customer. “The vehicle ‘swallows’ the engine of the R1. The tank is installed in the rear and we have a long wheelbase.” So let’s go. Converting the original cardan drive to chain was just one of the challenges to be overcome. The core of the new drive train is the swing arm from EXEET, which is produced exclusively in Euskirchen in addition to its own A-arms and also helps Raptor conversions to achieve more driving stability. The swingarm has a higher starting point and an optimized suspension strut linkage.

A pull-rod system was installed at the front, in which the spring struts and the wishbones moved under the frame construction. This allows for extremely wide A-arms and good steering control. So much in advance: It works really well. The EXEET reacts precisely to the driver’s steering inputs and runs extremely true to track. Two dampers from FOX work low, just above the ground, and thanks to improved roll pole support, they can almost eliminate buckling of the forehand in corners. Well done!

So the concept worked. Thanks to his customer – who is now churning around the country with his new EXEET – the project has now been brought to series maturity. You can buy used KFX online for around 2,500 euros. Partly with engine damage, which does not matter for a future base vehicle. From around 5,500 euros there is already an R1, which then has to donate the engine. The conversion kit costs 11,650 euros. If you want the pull-rod chassis, it is again on the books for 3,600 euros. The vehicle also works with the adapted A-arms of the series. That would be roughly the cost of building your EXEET yourself following Sebastian’s instructions. By the way, also such a brilliant idea that has already been implemented by some Raptor fans. The assembly in Euskirchen costs about 6,000 euros – depending on the effort and the conversion requests.

And? How is she driving?

An investment that is worthwhile if you want an absolute, exclusive driving machine for the road. We were allowed to experience them before the customer’s vehicle was delivered to its owner. Accelerating creates a certain pressure on the chest and a big grin on your face! 117 km/h are on the digital speedometer before we shift into 2nd gear. And the quad does not go up at the front, but straight ahead. The 180 hp power of the R1 is actually brought to the ground. Hammer! In third gear we’re already traveling at 167 km/h and we’re still making progress. The engine runs great, delivers 130 hp at around 8,000 rpm and another 30 hp at 10,000 rpm on the rear axle. Of course, Sebastian verified these values ​​on the dynamometer.

You feel like you’re always shifting gears a little too early. There is always something going on in the currently engaged gear. You really have to approach the power and performance to get the most out of the EXEET. The quad can be kept precisely on course in the curves. No buckling, no breaking away. On the straight you drive as if on rails. It goes without saying that you need the finest braking system to tame all this. Of course it’s mounted!

The “KFX” has the potential to become another EXEET bestseller. Seabstian Jornitz does not rule out assembling other engines. That’s nice because the scene needs good street quads. It’s a good thing that people like Sebastian keep getting stuck on their ideas.