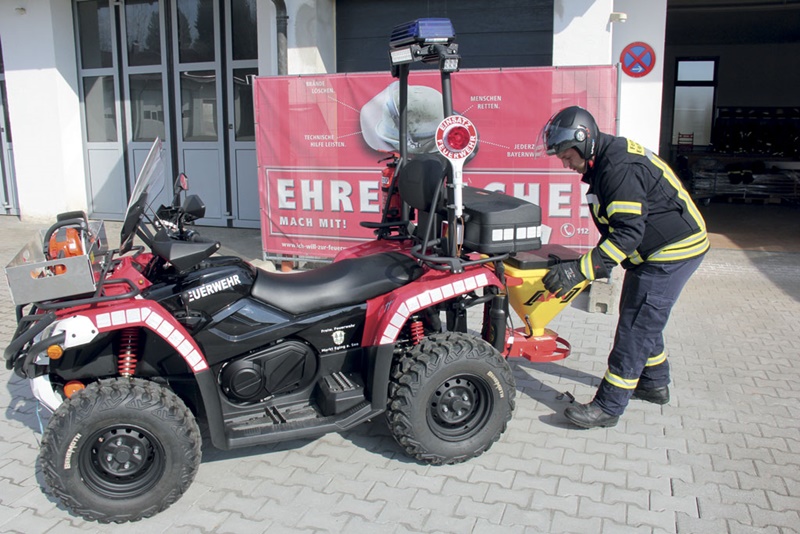 Since the fire brigade in Eging am See has been using an ATV, many tasks have become easier to do. And the offspring are enthusiastic.

Thomas Bumberger is the commander of the volunteer fire brigade in Eging am See. The place is located in the Bavarian Forest and is known to the quad scene because of the meeting in the western town there. “This is just one of the many different occasions that our CFMOTO is used for,” he explains, listing the advantages: “The ATV is more agile than our heavy duty vehicles. In the course of first aid under such cramped conditions, as in Pullman City, for example, we are much more likely to be at the scene of the action Rescue workers do not have to work with their trucks. Thomas tells the story of a man who had a heart attack and had to be taken to the nearest rescue station as quickly as possible in the crowd at a festival. Sitting upright. “That worked best with our ‘Eging 59/1’, the radio call name of the ATV.” The driver in front, the patient behind, held by another helper who finds a firm footing on the specially mounted rear running boards. The rescue was successful. So the stories could go on indefinitely. And that although the vehicle has only been in the syringe house for a good six months, where it was given its own exit.

The soldiers are so proud of the CFMOTO. “When Peter asked me if we could use an ATV, I thought he was going to pick me up,” laughs Thomas. But the said Peter is Peter Kremsreiter senior, owner of the local quad and ATV ranch. And the popular not to joke in such things, followed by deeds. Financed together with Pullman City and the ProBau company from Passau, a suitable CForce 450 EFI with a long wheelbase was soon on the work platform for conversion to a special vehicle. Basically, an ATV has the necessary attributes, but has to go beyond the standard equipment still need to be adjusted significantly.

In terms of color, it was possible to rely on a series version; the necessary white elements, namely the front and rear panels, were painted by the dispensers in a special process for moving plastic parts. The bumper and light mast come from the in-house production of the Quad and ATV Ranch. For increased resilience, gas pressure shock absorbers have been incorporated into the chassis, which also gain ground clearance and traction with 25-inch tires from CST. The carrier system for the equipment is identical to that in the fire engines. Boxes with material can be removed from them and transported on the racks of the ATV in a few simple steps.

Thomas Bumberger demonstrates this using a sawing system and thus provides another example of use. “We now almost exclusively remove storm damage by ATV. We can also approach cross-country if the paths or roads are blocked by fallen trees. ”Roads are also the keyword for the accidents involving chemicals or oil, which are very unpopular with fire departments. If these find their way onto the traffic routes, they have to be laboriously spread over, sometimes by hand and with a high level of manpower. With around 25 kilometers of motorway and more than twice as many on country roads, it is extremely time-consuming and nerve-wracking. The Eginger simply couple their spreader to the ATV and distribute the binding agent by remote control from the handlebars. A military man can even manage the workload on his own.

Voluntary fire brigades like the one in Eging am See do an honorary position. Members dedicate a large part of their free time to serving others. Educate yourself, push fire watches and readiness. In addition, there is vehicle and material maintenance. It is often difficult to recruit young people or other volunteers for this. And so the new CForce is also used more and more for advertising purposes. During sporting events, which the fire brigade has to secure anyway, the vehicle is prominently positioned and provided with the necessary information material. “The off-roader is particularly popular with our youth fire brigade. Especially because the kids will soon be able to practice using it on a closed area and under supervision. “

With the commitment of the fire fighters, sponsors and designers, a multiple “win-win situation” has arisen. The place has an even more motivated fire brigade, this a powerful, flexible vehicle that is quickly on the scene and can be easily operated by almost any member. And all of them have also won a priceless advertising medium. Commander Thomas Bumberger is therefore already looking forward to the trailer, which further expands and complements the spectrum of the CFMOTO. A removable carrying system for all common rescue stretchers will be mounted on this. Sponsors have already been found. A point of honor in Eging – like working in the fire department.

BRP TO LAUNCH ELECTRIC MODELS FOR ALL PRODUCT LINES BY THE END 2026 –...