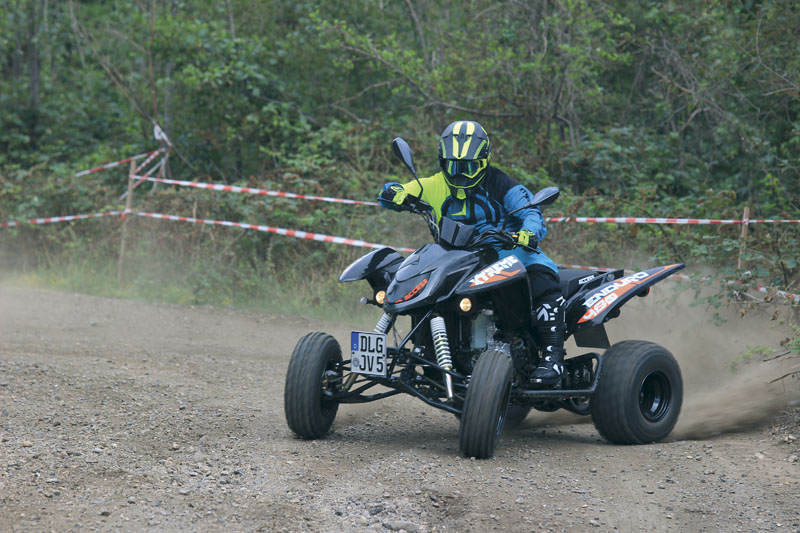 Hooray! The sport quads are back! With the Access Enduro 480, importer Michael Leeb is finally giving the scene a rear-wheel drive quad with a single cylinder and manual transmission. Completely against the trend. The vehicle enters the race with well-known virtues.

Off-road tour: You can do more with an enduro.

There are things that just never go out of style. They are and will always be desirable. If these things become rarer or are no longer so easily available, one likes to look back and reflect on their advantages. But fashion is such a thing: what was good will come back at some point. It’s the same with sport quads. The “Heckschleudern” with rigid axle paved the way to success for the scene. From 200 to 700 cc, mostly packed in one, sometimes in two cylinders, everything a sporty driver’s heart could desire was available. For a long time, the variety of brands was almost unmanageable. Today she is. Apart from Yamaha and some small series manufacturers, hardly anyone offers sport quads. The premium brands are concentrating on the versatile ATVs, gradually taking their quad models off the market. The 450s in particular enjoyed great popularity. They still do.

New edition of a classic: The Enduro from Access brings Michael Leeb back into the scene.

Reason enough for Michael Leeb Trading, importer for the Taiwanese brand Access, to breathe new life into a classic. The quad presented here has already come into our hands as a Triton, but also under its own Access label. The robust motor from Fuji attracted attention back then. We have already certified the same on various occasions as a good boost in all situations. The engineers at Access revised the stew together with the engine manufacturer and over the last few years have given it more torque from the basement. Once a shortcoming, it currently only needs a little speed at the beginning as an incentive if you want to get going quickly. The engine has an open output of around 40 hp and is characterized by a wide usable, linear speed range. Michael Leeb offers the quad with a LoF approval. The displacement of 449 ccm has remained, although the model designation is 480.

There are more proven ones to be found. The clear lines and the integration of the lighting into the appearance are successful. There is not much to complain about in terms of equipment and workmanship. The standard equipment consists of a powder-coated frame, off-road tires, aluminum nerf bars, lockable tank and the obligatory rear fog light as well as a trailer hitch. Three wave disc brakes delay propulsion. The steel braided lines and strong calipers produce good braking performance. Aluminum nerf bars with heel protection complete the sporty picture. The design of the fairing can be described as sporty and idiosyncratic. The main headlight was removed in favor of the ellipsoid lights, which is good for the optics. There is nothing new to discover about the swingarm. Here you go back to the tried and tested. Greetings from Suzuki. The box-type chassis part can be found 1:1 in the well-known LTZ 400. A digital display informs the driver about the speed, rpm range and fuel level. The buyer will certainly be pleased that he does not have to reach for the accessories shelf and only has to invest time in the individual adjustment of the vehicle. An enduro has a reverse gear in quad sport. This is activated by a cable on a lever on the left handlebar end. Put it in first gear – push the lever and downshift – that’s it! The “R” on the display indicates that the gear has been selected successfully. When shifting up, first gear is then automatically engaged again. The location of this switch is very convenient as you don’t have to take your hand off the handlebars. The whole thing is buttery smooth.

Suitable for everyday use: Quickly from A to B.

The five-speed gearbox shifts precisely, but sometimes tends to falter under extreme loads. A large cooler with a fan behind it ensures moderate temperatures in the engine block during heavy exertion. The engine can be started with an electric starter. The suspension elements are tuned quite tightly. They fulfill their purpose in the quad designed as an all-rounder and cover a fairly wide spectrum. The series setup is suitable for enduro use for moderate use. In contrast to a 450 MX quad, for example, the engine develops its power constantly. No brute force pulls on the arms and thus on the condition. This suits the rider who is flirting with competition use as a hobby or occasional trips to the cross slope. For such action, however, hands would ultimately have to be laid on the chassis. In everyday life, trips to work or after-work tours are on the agenda. The mix of enduro, off-road and on-road ultimately makes the all-rounder. But that means that we also have to master the road. On asphalt, the athlete is quite good on the road, but requires some physical effort in fast bends. Due to its width, the 450 always remains safe and stable. The incredible rolling noise of the off-road tires is annoying.

A real 450: brisk pace on the enduro course.

But it grips the loose surface of the MX track and during the enduro tour, which we completed in connection with the test rides. You can control the quad well at medium speed, but there are still reserves at the top. These can be released at unexpected obstacles and out of bends or hairpin bends. A courageous grip on the thumb throttle and off you go. The forehand can be lifted quite well. Moguls in the forest, narrow trees, roots – runs. The only limits are actually the series dampers. The rigid axle, the sporty handling and the engine allow endless drifting. Only the ground clearance at the rear under the sprocket is not overwhelming.

Thank you Michael Lee! With the Access Enduro 480, a quad is back that is easy to handle, sporty to move and quite robust at the same time. The standard equipment is top. The price-performance ratio is right. Tuning potential lies in the chassis if the owner with the appropriate driving experience wants to push the sporting limits. For those who only ride on the road, the Access Enduro 480 offers a good basis for conversion – or you can get the Super Moto version right away. But this is another story.